Feedback for a new(?) puzzle format

My wife likes solving puzzles and I like creating them. But I'm afraid my latest idea might not be as great as I thought - could you please beta-test it and give feedback on what to improve and how? Or has this idea been used by others I could learn from? The puzzle would be the image below, without any content or clue (at least initially).

Plotting the brightness of three horizontal slices of the image shows the following: 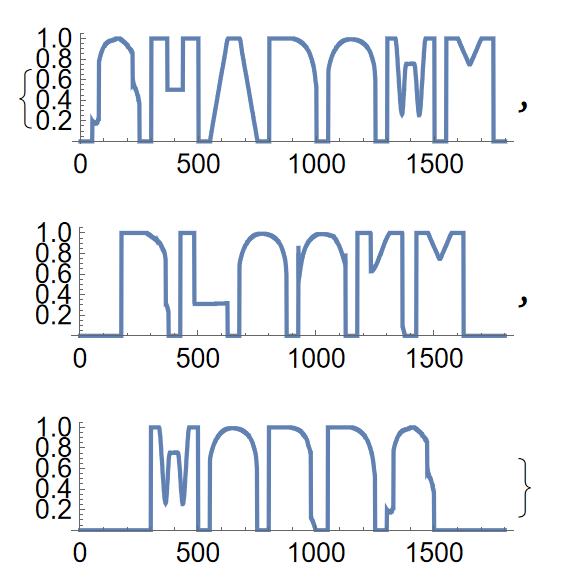 It takes a little interpretation, but I think it says something like:

Comments on the puzzle:

* I pretty much immediately recognized this puzzle as similar to "Merlin and Hermes: Mysterious Lines" by Tryth (thanks to Carmeister in the comments for finding it!). If I wasn't familiar with it then I probably wouldn't have been able to solve it.
* Being able to plot the brightness made it a lot easier, trying to solve it without the plot would have been more difficult, but probably more interesting as well.
* Due to those facts, the most difficult part was figuring out the letters from their upper profiles. One thing that made this a lot easier was the unique shape of the letters in this font: for example, you can see the leg of the R that makes it distinct from the B, and the lower end of the S makes it distinct from other curved letters like C and O. Choosing a font where the parts of the letters are more aligned would make this part more difficult and, I think, more interesting. Letter sets that could be made confusable are BDPR (half-round tops) CGOQS (round tops) EFITZ (flat tops) MV (deep vees) XY (shallow vees).
Two letters that did stump me for a bit were the K, which I thought was an N; and the Y, which I thought was an M for a bit. Then I thought it was an X, which made the letters read "SHADOWXBLOCKXWORDS," which, if I assume X separates words which is something I've seen in cryptography puzzles before, would make the solution "SHADOW BLOCK WORDS," which actually makes sense. Finally I realized that the vee was too high to be an X and could only be Y, which led to the final answer.

Not the answer you're looking for? Browse other questions tagged visual puzzle-creation or ask your own question.

19
Can you solve this logic puzzle in disguise? The color code behind the tomb
32
The Baconian Tower
18
What are the tricks used in making a 'Rebus' puzzle?
20
A pirate's treasure-hunt
61
You have 13 minutes to unlock this safe
21
These alien safes have no end
7
3D Nonogram - Spinoff of the Reboot
2
Feedback for puzzle i made up
13
GameDev: stuck with first puzzle design, would love resources to study from or algorithm suggestions!
10
Puzzle for Olivia