Travel in the USA

If you decide to travel from state to state in US in alphabetical order how many states can you cover if:

The state you are in must share a border with the previous state. The last state in your list need not share the border with the very first state you started from. Your answer should show a minimum of 7 states. Highest number gets the tick.

If you go in reverse alphabetical order would the answer be the reverse of your answer?

Note: States starting with same letter will be considered in alphabetical order per their following letters. Also you can start with ANY letter. 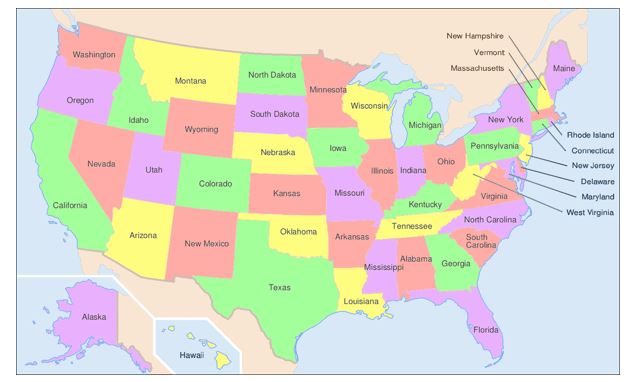 The longest path problem, while NP-hard in general, is actually pretty easy to solve on directed acyclic graphs, which is what we have here:

Let's see if we can't run the algorithm manually.

First, we'll need to find a topological order (no paths backwards anywhere in the list) for the states. There are several simple ways to find one on any DAG, but in our case, the alphabetical order already guarantees this property, so we get past this step for free.

Then we pick the state(s) with the largest LPEH, and trace our route backwards using the Best Neighbour(s) list:

And unless we made a mistake along the way (not at all impossible, this is clearly a job for computers), reading those from right to left we get the complete list of the possible maximum routes.

For the question about "is the answer the same (but reversed) if the alphabet were reversed: Yes. All the same links would be there, every single one of them reversed. (Incidentally, this means we can also run the algorithm "in reverse gear" to find the answer, which is useful sometimes.)

Chain of seven with

Or another seven with

I've at least found a chain of seven, to start

An opening bid with