Can you place the first 9 natural numbers (1 to 9) in a 3x3 grid such that every row and column sums to a prime? The sums do not need to be distinct. Bonus: can you also make both diagonals sum to a prime?

I can do it with:

I can't make it, indeed, this Julia codes enumerates all possibilities and none is eligible! 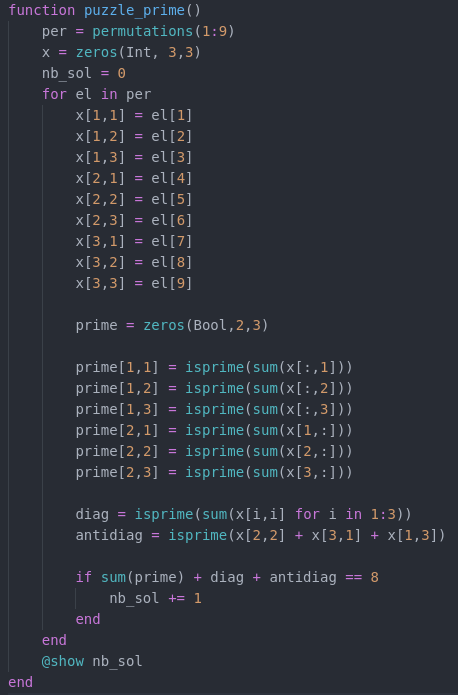 Let's take a moment to define a useful term. If we delete any 1 row and 1 column of a 3x3 matrix, we obtain one of 9 possible 2x2 submatrices. Let's call any of these 2x2 submatrices of the original 3x3 matrix a subquad.

Let's first restrict ourselves to all rows and column having an odd sum. Then each row or column must have an odd number of odds, equivalently an even number (0 or 2) of evens. Because there are exactly 4 evens, this means that 2 rows have 2 evens each, and 1 row has 0 evens. Analogously, 2 columns have 2 evens each, and 1 column has 0 evens. Therefore, the evens form a subquad.

We'll also show the following: No subquad has 2 pairs of equal remainders. Indeed, suppose one did. There are three cases of what this subquad could look like (where the third row and third column have been removed).

This leaves no space for X's (or O's) subquad.

X's and O's subquads will comprise all of 2 columns, leaving no space for the remaining subquad.

Analogously, X's and O's subquads will comprise all of 2 rows, leaving no space for the remaining subquad.

Suppose we have any valid configuration of 3 groups of remainders (when divided by 3). We need to find which subquads we could designate as the even subquad and still find a valid assignment of the numbers from 1 to 9.

How many valid configuration of 3 groups of remainders (when divided by 3) are there? Call the group that occupies the central square O. There are 2 cases of O's subgroup (up to rotation/reflection).

By inspection, there is only one way valid configuration of the remaining groups.

Again, there is only one valid configuration.

In total there are 12 valid configurations. Therefore, the total number of solutions is $12\cdot96=1152$.

Each of the two cases of valid configurations above has an invalid diagonal containing 3 different remainders, so it is impossible to also satisfy both diagonals.

Not the answer you're looking for? Browse other questions tagged mathematics primes or ask your own question.