Darkness has descended on the infinite plane of Euclidea. The only sources of light are $4$ lighthouses; they were built long ago, and cannot be moved. The bulbs of these lighthouses can be rotated any direction, and illuminate a $90^\circ$ sector of the plane. The Euclideans want to bring light to the entire plane: can they do it, no matter where the lighthouses were built?

What about when there are $5$ lighthouses, but they only illuminate a $72^\circ$ sector?

(Think of the light houses as being transparant, they don't cast a shadow).

Edit Statement was reworded to clarify that the lighthouse locations cannot be chosen.

This answer proves that four lighthouses is possible. It turns out that it is also possible with five lighthouses.

The first step is to choose a lighthouse, call it $A$, and angle it in such a way that

Below is an illustration: 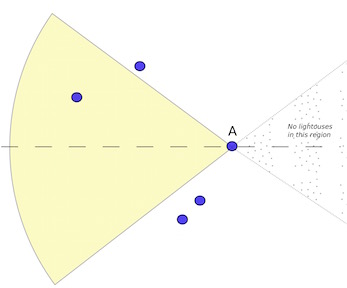 Why is this possible? Imagine stretching a large rubber around all of the lighthouses, forming a polygon. On the vertices must have an angle of at most $108^\circ$; choose this lighthouse to be $A$. Then rotate $A$ until its midline cuts the other four lighthouses in half. If doing this doesn't fulfill the second bullet point, then turning $A$ around $180^\circ$ will.

Next, we use the two lighthouses below the line to illuminate the rest of the upper half. Let's label a compass with degree marks going counterclockwise so $0^\circ$ is east, meaning $90^\circ$ is north, $180^\circ$ is west, etc.

Of the bottom two lighthouses, let $B$ be the one which is further along in the $342^\circ$ direction, and $C$ be the other. Shine $B$ so that the clockwise edge of its beam points towards $72^\circ$. Shine $C$ so its clockwise edge points east. This will illuminate the upper plane, as shown below: 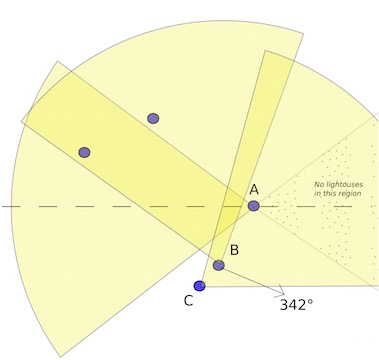 Note that $A$ and $B$'s beams must overlap because of the second bullet point in how $A$ was chosen, while $B$ and $C$'s beams overlap since $B$ is further along in the $342^\circ$ direction.

Doing the same procedure with the upper two lighthouses illuminates the plane.

As a fun fact, it turns out that if you have any number of lighthouses, and their beam angles add up to $360^\circ$, then they can illuminate the plane. However, the proof is quite mathy.

How do we cover the area?

For $n$ lighthouses, each lighthouse illuminates an arc of $\frac{360°}n$. This means that each lighthouse is responsible for exactly $\frac1n$ of the area--if they were all clumped together, they must all be pointed radially outward cutting the plane into a pie with $n$ equal slices. If a lighthouse is not at the origin, it still must be oriented in a way that it covers that same pie slice. The only way for it to do this is if it is pointed the same direction, and located somewhere in its slice's negative space.

That didn't make sense? I don't blame you. It's easiest to understand with the 4 lighthouse case:

To form a solution for $n$ lighthouses:

Take a very large circle and divide it into $n$ equal slices. Orient your circle such that all of the lighthouses are inside it, and exactly one lighthouse is "inside" each slice (a lighthouse directly bordering multiple slices can be chosen to be in any one of them). Aim each lighthouse in the exact opposite direction of its chosen slice. Voila 100% coverage.

For 4 lighthouses, you should always be able to choose your origin and the orientation of the axes such that one lighthouse is "in" each quadrant. For 5 or more this is not always possible. Take for example a clump of three lighthouses very far away from the other two, which are also clumped together. There is no way to choose an origin such that the lighthouses are evenly distributed to all pie slices.

Here's a picture for the unexplained downvoters 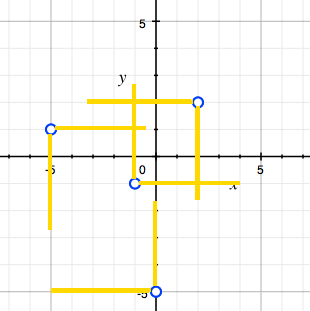 Each quadrant is completely covered by its lighthouse, therefore the whole plane is covered.

Here's another solution to the four lighthouse problem. It's very similar to dmitch's, but replaces the bit about placing the axes so there is one lighthouse in each quadrant with something that is a bit more straightforward I think.

This answer is only valid when the lighthouses form a convex polygon.

If you can't move the lighthouses, the solution is to

Find the centroid of the polygon formed by connecting the four lighthouses. For 4, you can cheat this by drawing 2 lines between the lighthouses on opposite sides. Point the lighthouses at the intersection of those lines. 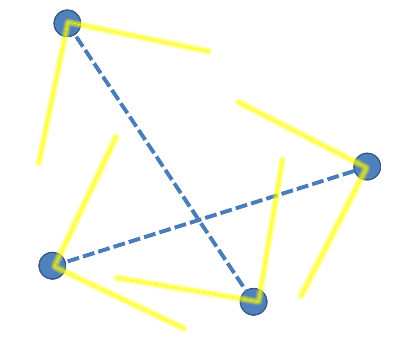 With 5 lighthouses, the solution is similar but a little more complex to find the center point so I'll just approximate it graphically. (I know the diagram still shows the light cover a 90° sector instead of a 72° sector. That's just laziness on my part.) 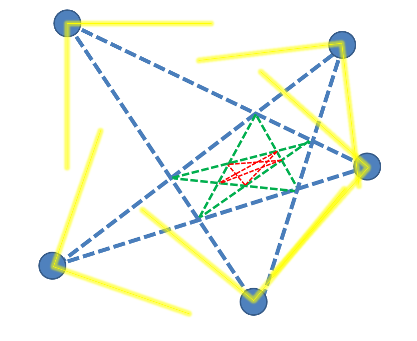 As you've probably realized, this operation should work for any polygon with n sides long and lighthouse coverage angle α degrees so long as α ≥ 360/n is true.