What did Peter do to cause the water temperature to alternate?

Draw a simplified plumbing schematic of a standard shower stall, and the solution should be easier to find. Below is such a drawing.

I can see an answer but it means it is not an accident, Peter has a weird sense of humor.

First note that the description "alternated every second from hot to cold to hot" is a bit misleading, since the water flows only for 3 seconds. In fact the water is hot with a 1 second intrusion of cold water.

Peter installed a heat-exchanger between the hot and cold water pipes leading to the faucets. He closed the cold faucet last. That cooled down the water in the heat-exchanger, including the hot side.

The obvious solution to the problem:

Pam should divorce or find a new boyfriend.

To find a valid answer, start by modifying the simplified plumbing schematic as follows:

Do not modify the simplified plumbing schematic, since the answer can use essentially the same diagram. But note that the diagram is "not to scale". Can you find the rest of the answer before reading further?

Peter made the following physical modifications:

Peter made the pipe longer, from the junction near the faucets, to the shower head. This is the gray section of pipe in the diagram shown in the OP. He used PVC pipe, which has low thermal conductivity.

At the end of his shower, Peter did the following:

Peter alternately opened and closed the hot and cold faucets, leaving alternating segments of hot and cold water in the pipe to the shower head.

This left the water in the following state:

So when Pam ran the water in the shower:

This puzzle was inspired by:

A real shower that I took. At one point, I ran only cold water, then I shut off the shower for a minute, and then I turned on only the hot faucet. Cold water came out for a second, followed by hot water.

Florian F's answer gets part of the solution but doesn't realy explain the cold/hot/cold nature of the water flow. So, at the cost of wasting water , how about tthe following:

There is an equal and opposite effect when operating the cold tap.

Note that if the taps were left on for more than 3 seconds there would be no more rapid temperature exchanges - so hot tap would remain hot and cold tap would remain cold. Also if Pam repeated the 'experiment' without waiting for long enough for the inefficient heat exchangers to heat/cool the water in the inside pipe, then the temperature change wouldn't be observed.

Also note that the diagram is only an approximation of the required pipe lengths - to avoid an initial splash of room-temperature water, the section of pipe between Hx B and the hot tap, and from the hot-tap to the shower nozzle should be very short (and similar for Hx D and the cold tap route). If these pipes are not suitably short then water flow when turning on hot would be [room-temp/hot/cold/hot]. 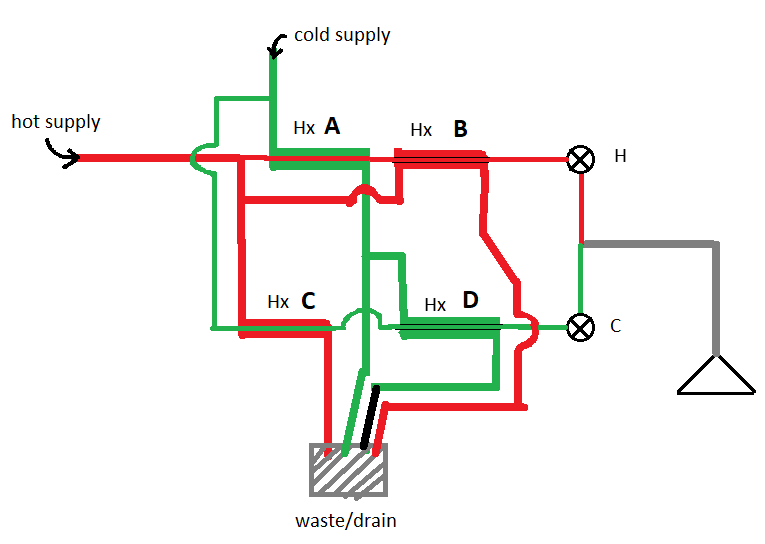 For a 'cheap and inefficient' heat exchanger that can be made from "some simple plumbing tools, and some ordinary, low-cost plumbing parts" how about the following? Length of the heat exchanger would be ~a few 10's of cm - approximating the length that one second of normal water flow runs a long in one second.