I found this on the net and tried to solve it with no luck. However there is a tricky way of solving this problem and hence I am posting it here as a puzzle. Give it a try if you have not seen the solution.

Consider an equilateral triangle. Pick a random point inside the triangle. Connect the random point to the three verices by drawing three lines. See figure below.

Two of the three angles at the random point (say x and y) are known.

Now, if the three line segments formed by connecting the vertex to the random point were removed from the original triangle to form a new triangle (like shown), can you determine the angles of the new triangle? 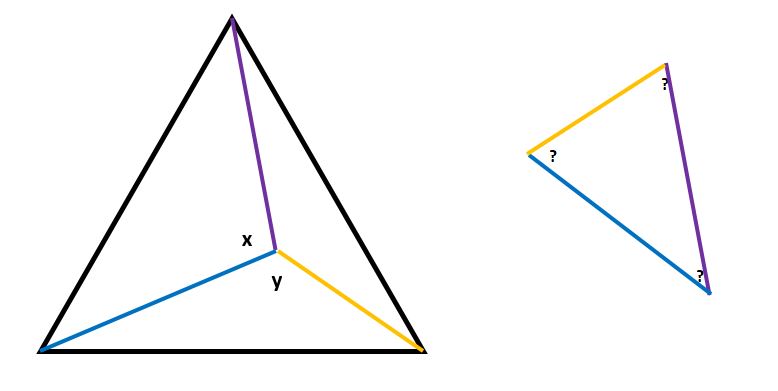 Attribution: T Khovanova and A Radul in "Killer Problems"in The American Mathematical Monthly 2012

(I don't think I've seen this before, but having figured it out and written it down I have a bit of a sense of déjà vu...)

call our inner point P, and draw lines through P parallel to the sides of the original triangle. These divide the triangle into three smaller equilateral triangles with vertices at P, together with three parallelograms each with one of our three line segments PA, PB, PC as diagonals.

A bit of notation:

say the bottom left corner of the original triangle is A, the bottom right is B, the top is C. Then call the endpoints of the horizontal line through P Ac and Bc (they are points near A and B respectively, on the triangle-edges joining them to C), and similar for the other four constructed points. So our bottom left parallelogram has vertices A and P at opposite corners with the blue line segment AP joining them, and its other two corners are Ac above and Ab below.

notice that the distances A-Ac, Ab-P, Ba-P, and B-Bc are all equal, and similarly for two other quadruples of distances.

let's take one of the two (congruent) triangles into which each parallelogram is divided, and try to fit them together. So take triangle A-Ac-P and attach it to P-Ba-B so that A-Ac matches P-Ba, so now we have a quadrilateral (A/P)-(P/-)-(Ac/Ba)-(-/B). And now we'll try to fit triangle P-Cb-C so that P-Cb matches Ba-B and Cb-C matches Ac-P. The side lengths are correct so the only question is whether the angles come out right at the three-way common point in the middle: that is, whether angles A-Ac-P, B-Ba-P and C-Cb-P add up to 2pi. And they do! Angle A-Ac-P is pi minus P-A-Ac minus Ac-P-A, which equals pi minus P-A-Ac minus P-A-Ab, which equals pi minus angle A. Similarly for the other two. So the sum is 3pi minus (A+B+C) = 3pi - pi = 2pi.

our three triangles do fit together -- and what they make is a triangle whose sides are our three line segments. So what are its angles? Well, e.g., the one opposite the P-A line segment is P-B-Ba plus C-P-Cb. That's the same as B-P-Bc plus C-P-Cb; in other words, it's the angle in the original triangle opposite the P-A line segment minus the angle Bc-P-Cb. That last angle is pi/3 because it's one angle of an equilateral triangle.

the new angles are the original angles x,y,z, each minus pi/3.

Here's a fairly crappy diagram that may help follow the above: 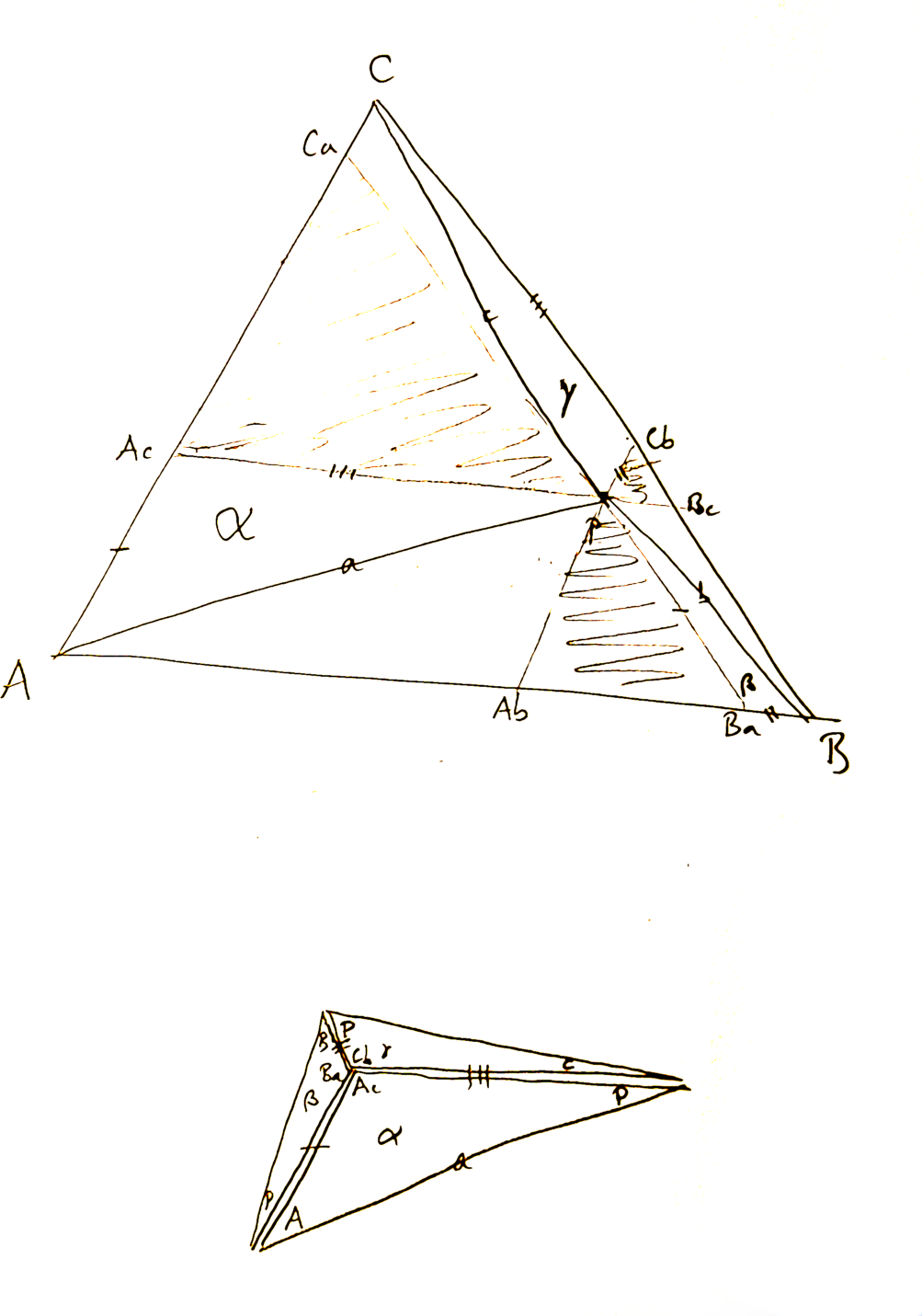 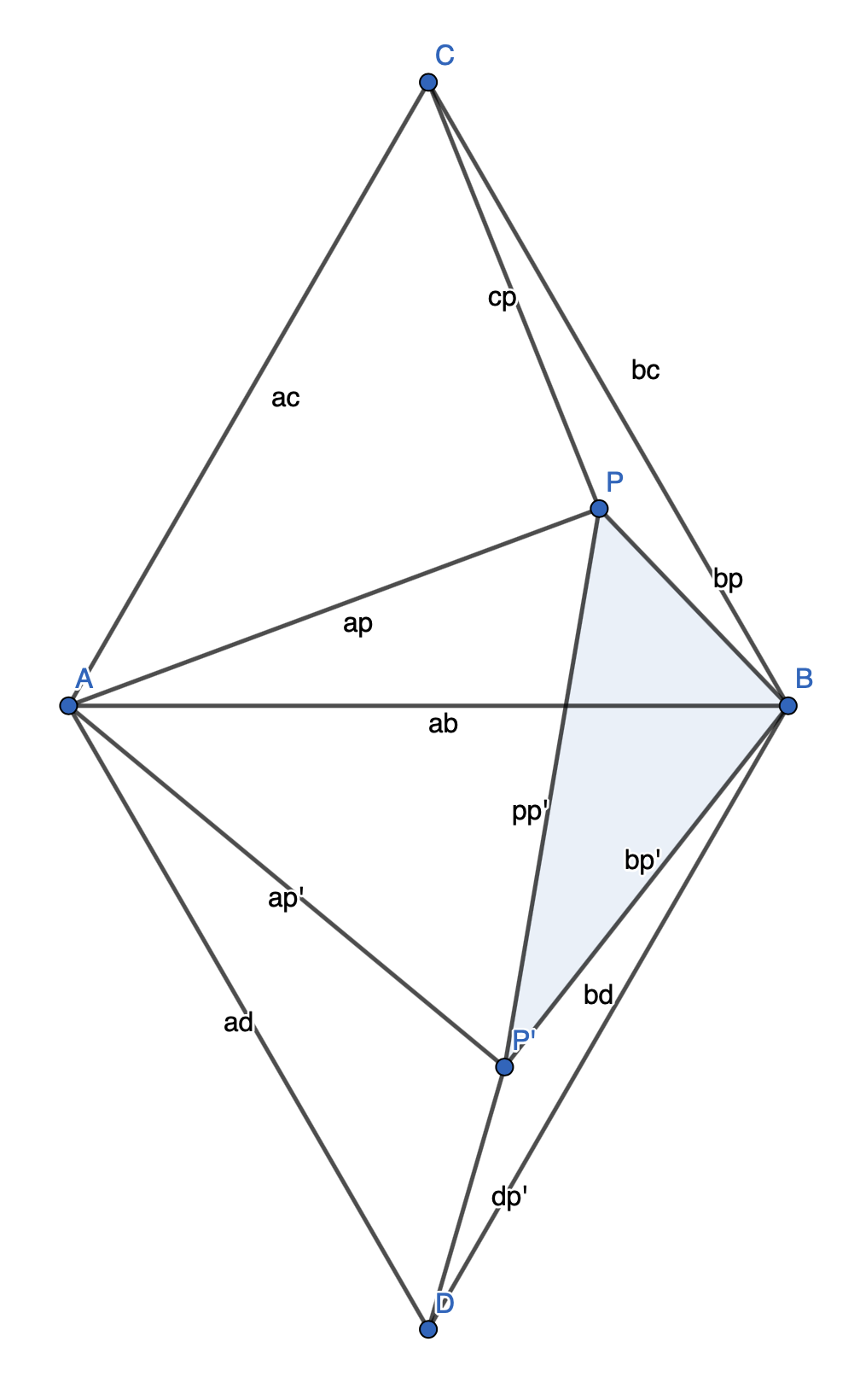 7
Clash of arrows
2
Geometry problemsolving
13
Geometry From Hell
7
Geometry optimization
25
The "Loop of rope" dilemma
0
What is the measure of $\angle{BAE}$ and the length of $BE$ and $ED$ in a square?