This is Part II of a series. Part I can be found here: The Alchemist's Grimoire

Again told from the perspective of my fantasy self.
The story is not needed to solve the puzzle, but may contain some small clues.
The story continues from Part I, but the puzzles are unrelated.

...that's certainly an interesting thing for her to want.

In the meantime, though, we've gotten to know each other a bit better, and today's the day she decided to let me try some alchemy for myself. I was up late listening her talk about how alchemy can also be used to cook and bake, and how tea and charcoal can be made into chocolate, and then she suggested that I give it a go.

She woke me early in the morning, and brought me to the tables downstairs. There, I found her grimoire and tiny cauldron seated next to some small bottles filled with various objects and fluids.

The jar with the "✧" had chunks of stone inside it.
The bottle with the "△" symbol had strips of some warty seaweed-esque stuff.
The one labeled with the "☉" looked like it was storing wine.
The container with the "☆" on it seemed to emanate faint voices from inside.
And the last one, labeled "❤", had something viscous inside of it. ​

"You are going to make breakfast for everyone." she said, flipping to a page in the middle. "This page should tell you everything you need to know. However, if you can tell me what that last recipe makes before, well, making it... I'll give you something. I'll have to think on what though."

Before starting, she gave me some final tips.

"Be sure to remove the floaters, these thing tend to create a lot of excess gunk. Also, just don't blow up the place... I say that from personal experience. Also, these all need some water to start, but don't worry about it recipe-wise. You can use my canteen."

When she set her tome back upon the table, I was relieved that I could read the page! Huzzah for Common! Well, I could read most of it. The components were all labeled with different symbols. After contemplating it for a while, I gave Astrid my guess as to what the last recipe created, and did my best to follow the instructions.

What would I end up making for breakfast? Kudos if you correctly identify the contents of all the bottles! 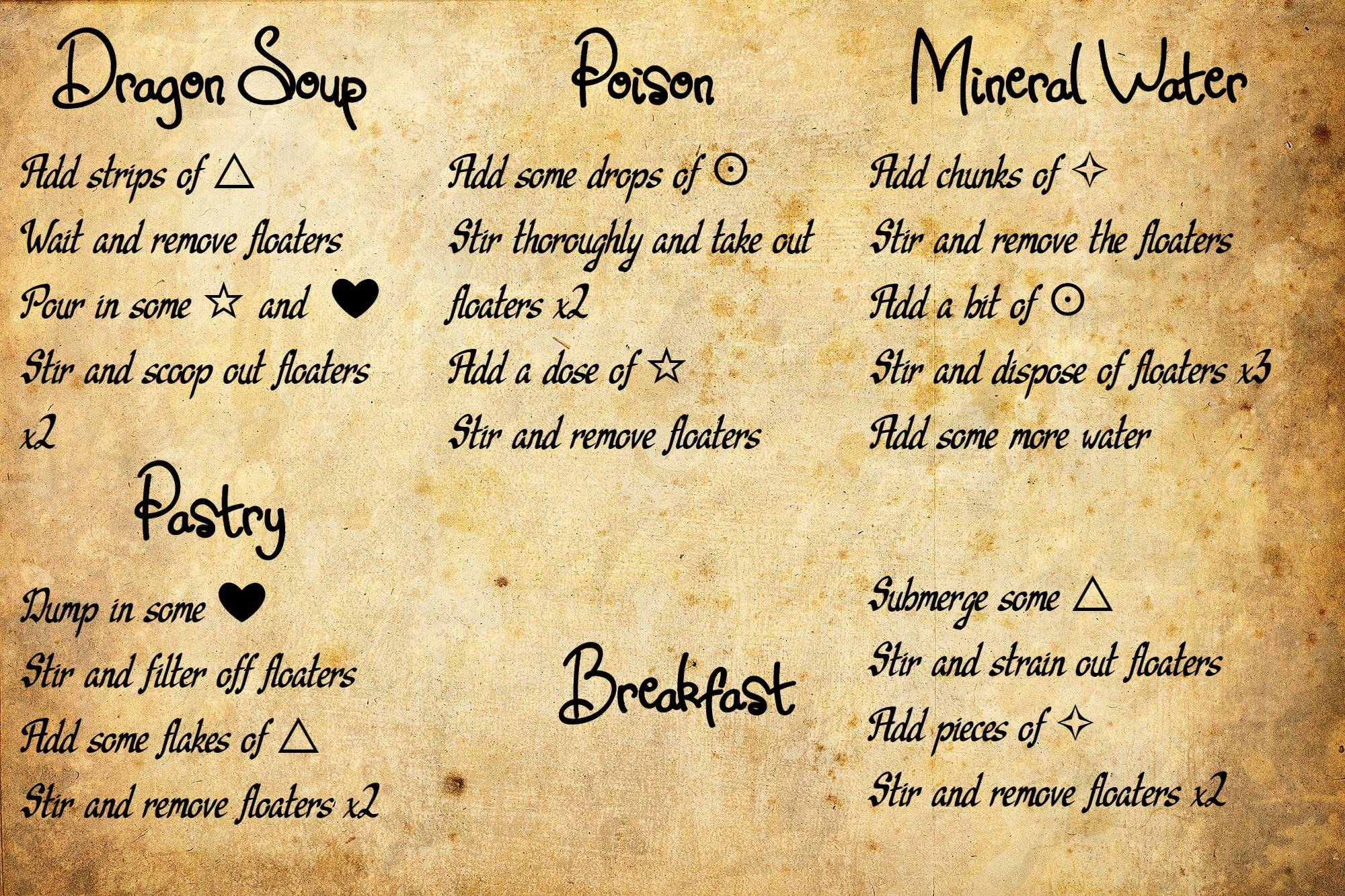 MINERALWATER says to add WATER at the end...
How curious.

Mmmhmmm, for breakfast we are having

The clues in the story

how tea and charcoal can be made into chocolate

"Be sure to remove the floaters, these thing tend to create a lot of excess gunk."

suggest that our alchemy involves

Then if we note that

the recipes specify how many floaters are to be removed from most ingredients, we can calculate some word lengths.

Dragon Soup include both ingredients of Pastry (❤ & △) and adds a third ingredient (☆).

Poison and Mineral Water both contain ☉. "The one labeled with the "☉" looked like it was storing wine."

☉ likely has the letters I and N. PINOT is a 5 letter wine that has I and N. It also has a P for Poison.

Then Mineral Water also contains ✧. "The jar with the "✧" had chunks of stone inside it."

Mineral Water still needs M, E, R, A, and L. A six letter stone with those letters is MARBLE.

Again, Dragon Soup contains all the ingredients of Pastry (❤ & △) and adds a third ingredient (☆). Both remove 3 floaters.

Dragon Soup contains all the letters of Pastry except T and Y. So the three ingredients consist of the letters DRAGONSOUPTY? where the ? is an unknown. Anagramming those looking for something viscous gets us SYRUP for ❤.

Then the rest of the ingredients must be

"The container with the "☆" on it seemed to emanate faint voices from inside." could be SONG and "The bottle with the "△" symbol had strips of some warty seaweed-esque stuff." could be TOAD. Toads are certainly warty.

Then our ingredients are

and our recipes are

Finally, our breakfast is

When I first saw MARBLE I started thinking about scrambled eggs and it took forever to accept it wasn't that and work out the correct solution!

8
A Smart Girl -*_*-
17
What was the child sent to buy?
9
A Christmas Tartan
6
A Bad Dream Puzzle
6
Little Pictures: Charlie's Lunch Edition
37
Charlotte's lost fish
1
Reena and the doors. How many?
4
The Adventures of a Chocolate Cookie
13
The Alchemist's Grimoire