Just thought of you – A letter from Gladys 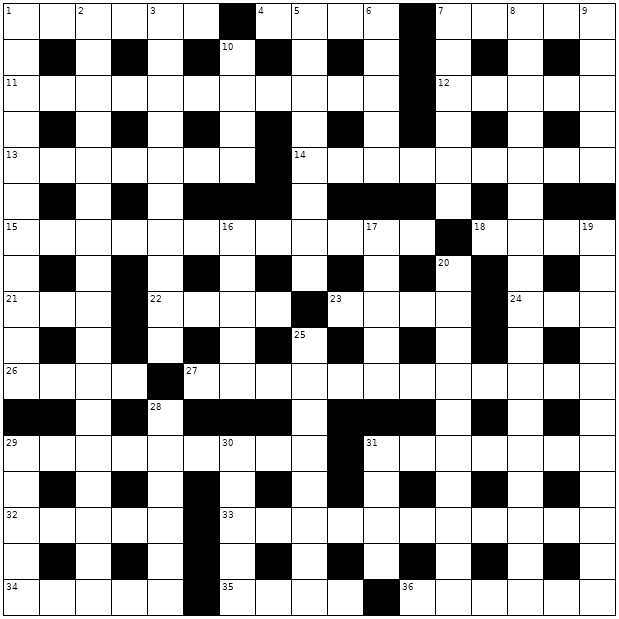 Letters from Gladys are geography-themed standalone crosswords. Each puzzle has five thematic answers, which are places, sights or landmarks in or around a certain location (in this case, a city). Each thematic answer is notable enough to have its own article in the English Wikipedia, although not necessarily under the same name that is used here. The goal is to fill the grid, identify the thematic answers and guess the name of Gladys’s destination, which is not indicated in the grid.

I hope you are well. I was travelling and thought of you. I don’t have a fancy finale or anything like that planned for you this time, just thought I’d occasionally drop you a letter to keep you posted about my whereabouts. My today’s destination has plenty to offer in terms of history, culture and culinary arts, but it is probably best known for one specific thing in which it’s one of the top spots in the world. Can you guess where I am?

Across
1. French writer from late eighties starting to pen story's beginning (2,4)
4. Museum displaying contemporary pieces about political correctness (4, abbr.)
7. The constitution of Saudi Arabia, as written, ultimately includes right to gather (5)
11. Blues musician Rainey punctuates piano hymn with distortion and overdrive (11)
12. Wrapped in latex, celebrities fare much better (5)
13. Land ruled by a king from home during the time between sunrise and sunset (7)
14. Folk unassociated with the church tortured pope in alley? Horrible! (9)
15. Restoration of port – need to go around jetty and bridge (4,2,6)
18. Region of Ethiopia farmlands? (4)
21. Early Autumn birth for Lionel Messi? (3)
22. Bubbly mass of unruly hair cut right (4)
23. #1 (instead of #2) highest mountain in Japan, an island country in the Pacific Ocean (4)
24. Chancellor left Dutch master to sleep (3, abbr.)
26. Legendary clergyman's sword (4)
27. Home of Reds: Team is in trouble against Detroit player (5-7)
29. Prog group had entered state of great sadness after retirement, displaying makeup on the face (3,6)
31. Spiritual leader from Guatemala agitated after personnel's rights are ignored (7)
32. Notable Balkan native: The fifth man sent into space (5)
33. Gamer played in a tournament; he trembled in the end like some leaves (11)
34/35/36. Hand over dog belonging to us in pale, ruined city square (4,2,2,6)

Down
1. Sandy Hill, a character from Athens, participates in nude adult dancing (4,2,5)
2. Retreating army's captured fake gold container – it contains brass, among other things (8,9)
3. Hi! Um, I'd defy orders and get rid of some dicarbon monoxide? (10)
5. Nuanced exchange, getting two fifties for a hundred, is cancelled (8)
6. "Wacky Charlie", a musician named Charles, entertained core unit of ANZAC (5)
7. Stood in line and struck the ball like a snooker player, maybe for the audience (6)
8. US president is coming after Pierce – surprisingly rates poorly, is likely to have a very negative impact (6,3,8)
9. As a reverend says, "Behold! Near is the Truth!" (2,3)
10. Award for an aunt of Dorothy and Gladys's (4)
16. Maybe a Hawaiian singer named Edith stopped early after being interrupted by jazz duo (5)
17. It flows down from the Alps, inevitably heading for the centre of Cologne (5)
19. Land involved in love affair that's explosive (5,6)
20. Increasingly soft union did me wrong (10)
25. Dancing cockatoo? It has no chance in hell (8)
28. Pop singer has eaten very small piece of Edam cheese (6)
29. Swallow is in poor condition, having scratched wing (3,2)
30. Father's outside, cries regularly? That's terrible (5)
31. Silence a cuckoo (4)

I hope Gladys enjoys her break in:

BORDEAUX, FRANCE, an area most famous for its wine and vineyards, where she will be taking in the sights of the CAPC, Dune du Pilat, Pont de pierre, Saint-Émilion and Place de la Bourse (all of these places appearing in the completed crossword grid). 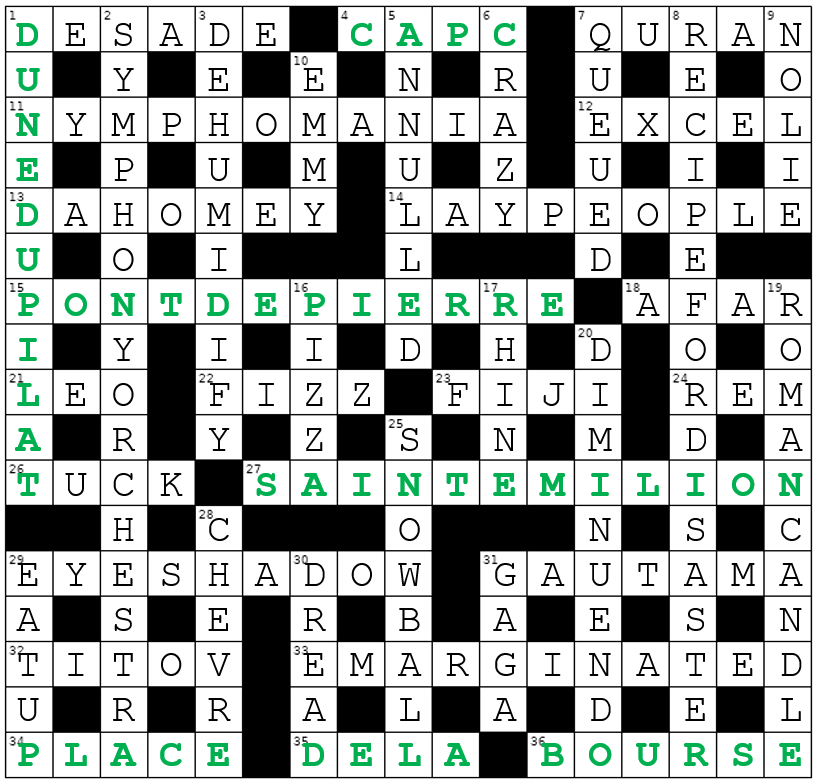 For the record, I loved so many of these clues that it's hard to pick a favourite this time (although, if pushed, it'd probably be one of 2D or 8D). Another excellent crossword from Jafe - what a treat for Christmas morning!

7
Bikini life – A letter from Gladys