This puzzle is part of the Puzzling StackExchange Advent Calendar 2021. The accepted answer to this question will be awarded a bounty worth 200 reputation.

Your great-grandmother might have passed away, so it is kind of surprising to receive a holiday (and coincidently, your birthday) gift under her name this morning. She remembered your deep-interest in puzzles since you were seven.

You open the box and there lie eight long warm witney blankets. What could she possibly want to tell you? The illustration is commissioned from a friend of mine, A Pradityo. Big thanks to all testers from Puzzlers Club especially TostCronch! Also an extra shoutout to TheGreatEscaper for his WITLESS - A Puzzling Journey as a huge inspiration! Likewise, this is heavily motivated by The Witness game. No understanding of the game is needed. Was planning to release this on my birthday (Dec 15th) but hey, why not for Christmas Eve instead? :)

Let's start with some first observations about the room:

7 of the blankets contain 4 grid puzzles each, and there is one additional blanket (at the right), which is probably needed for the extraction of the answer.

There are 3 books with readable titles in the room. In the top left, we have "TWINS APART", on the chair below this there is a book "BALANCE of LIFE", and in the bottom right on the table is the book "LIFE AT THE EDGE".

Finally we note that there are three half crosses at both the purple blanket and the final extraction blanket, suggesting that these should be joined together.

So let's first consider the puzzles on the red blanket. We have four puzzles, which seem to contain four types of clues: filled squares, empty squares, filled circles and empty circles. One thing in particular to note is that the clues in the third and fourth puzzles are a subset of the rules in the first puzzle (when we ignore rotations, which I assume we can do). This means that these puzzles probably have the same solution (unless the absence of a clue also means something, but assuming that the rules are as simple as possible, this seems like an option to ignore at first). Also looking ahead to the second blanket already, and taking into account the book "BALANCE of LIFE", I deduced the following rules:

This set of rules allows us to solve all puzzles on the first two blankets: 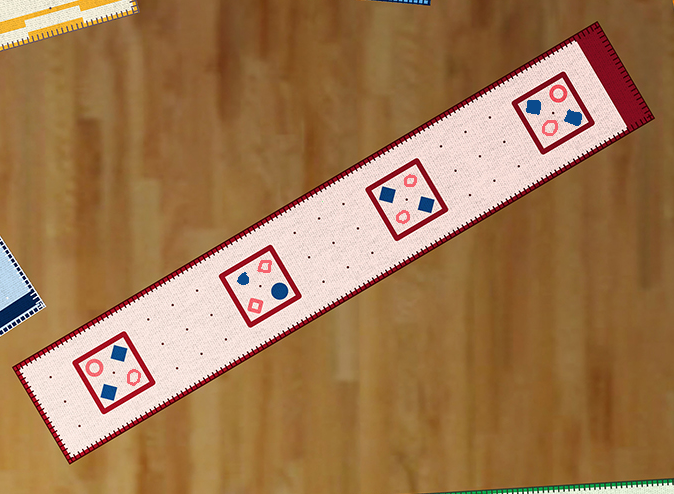 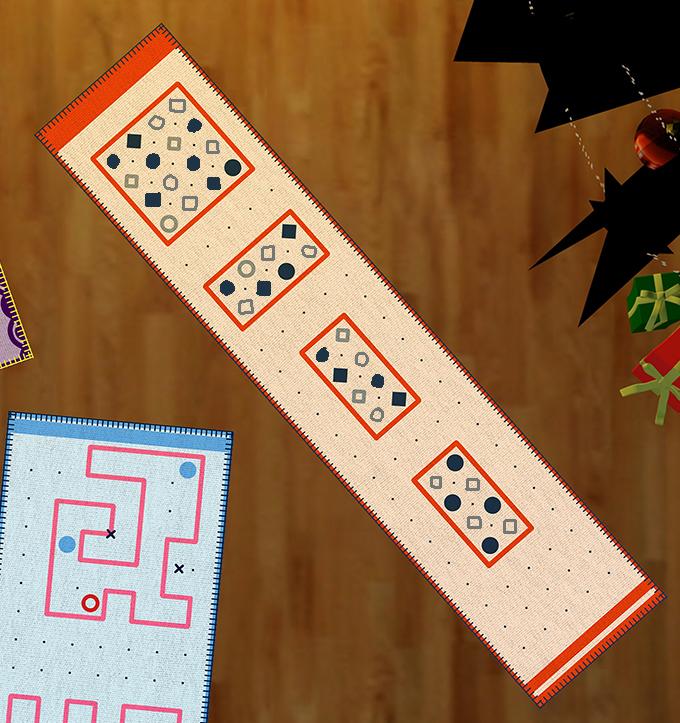 Using the already found rules, we can already make quite some progress on the third blanket: 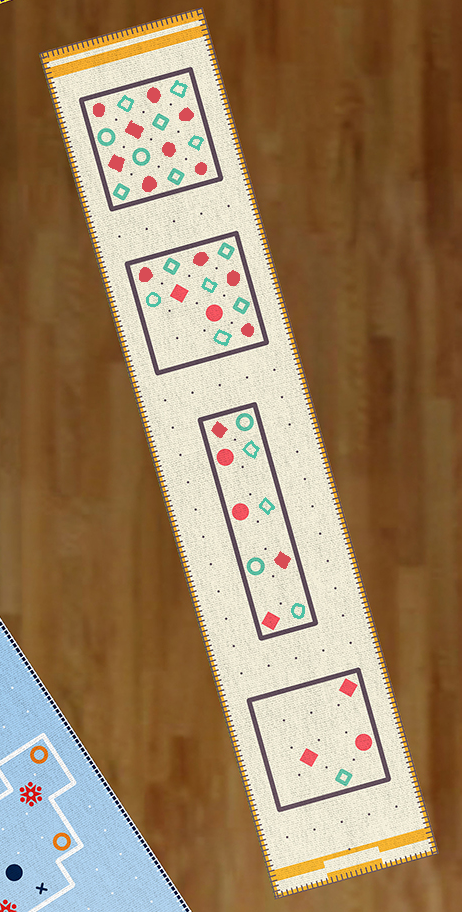 Now we are stuck however... So either these puzzles are not constructed with only one solution (seems unlikely), or we are still missing some rule. Fortunately, we can always still look at the books for some more hints! In particular, the book "TWINS APART" suggests the following rule:

Note that this rule is actually always satisfied for the puzzles on the previous blankets, and also the third blanket has a unique solution now!

The fourth (green) blanket (at the bottom of the picture) introduces something new: crosses. Luckily, we can just ignore these when solving the first puzzle on the blanket, and we still get a unique solution:

This suggest the following rule:

A cross between two adjacent cells means that these contain "opposite symbols". (So one circle and one square, and one of them filled and the other empty.)

For the third puzzle, we also need to know what happens when there is a cross on a corner of four cells. The following rule appears to give a unique solution:

A cross on the corner of four cells is equivalent to four crosses between each pair of adjacent cells among these four cells.

This allows us to solve the remaining puzzles on this blanket:

On the next blanket, we have irregular grids. For the first puzzle, we do not need any additional rules. However, we get stuck at the second puzzle:

To solve this puzzle, we need a new rule (or actually, we need to extend a rule we already have). In particular, the rule about adjacent symbols not being equal also holds when there are cells in between which are not part of the puzzle. For the crosses, we also need to ignore the empty cells, and just consider the two closest cells which are part of the puzzle. (The crosses between four cells are still replaced by four crosses between two adjacent cells.)
This allows us to solve the remaining puzzles on this blanket:

Yeah, I am not really sure what the symbol introduced on this blanket (blue on the left) is supposed to represent, but I will call it a joker. This is because the following rules seems to be intended (replacing the first rules about the number of filled/empty and squares/circles being equal in every row and column): 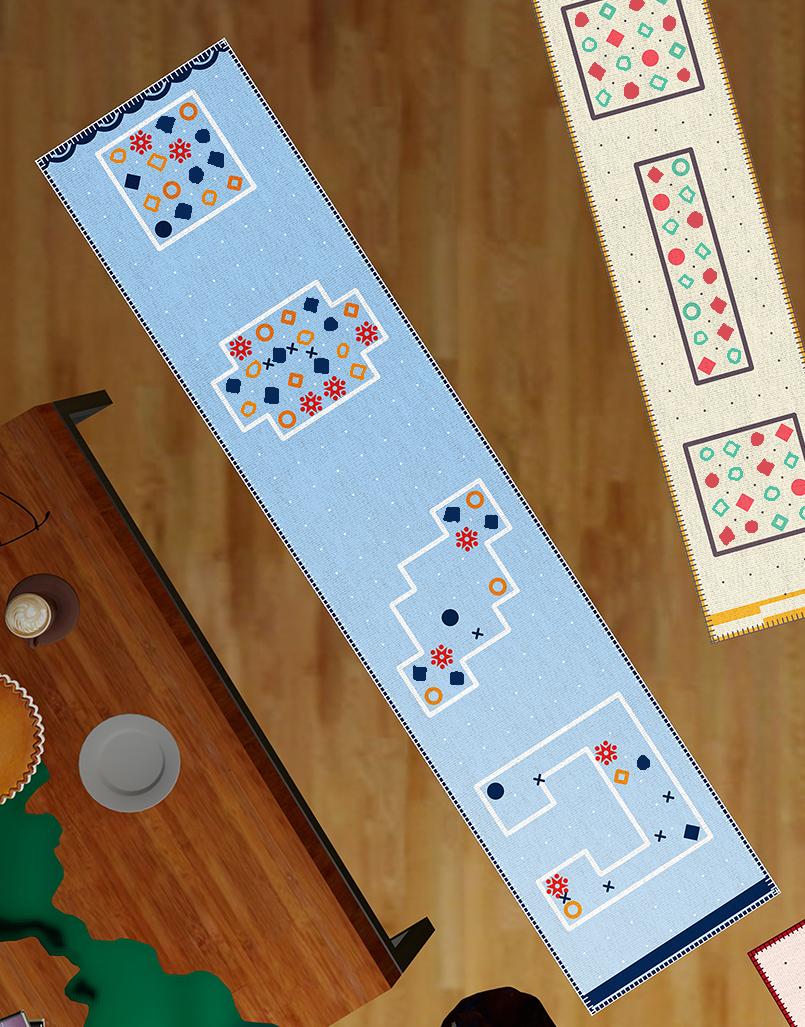 For the last two puzzles, we also need to interpret the no-adjacent-equal-symbols-rule for the jokers. It turns out that for this rule we need to ignore the jokers, just like we did with cells outside the puzzle (so symbols at different sides of a joker must be different. Also for crosses we ignore the jokers. This allows us to solve the remaining puzzles: 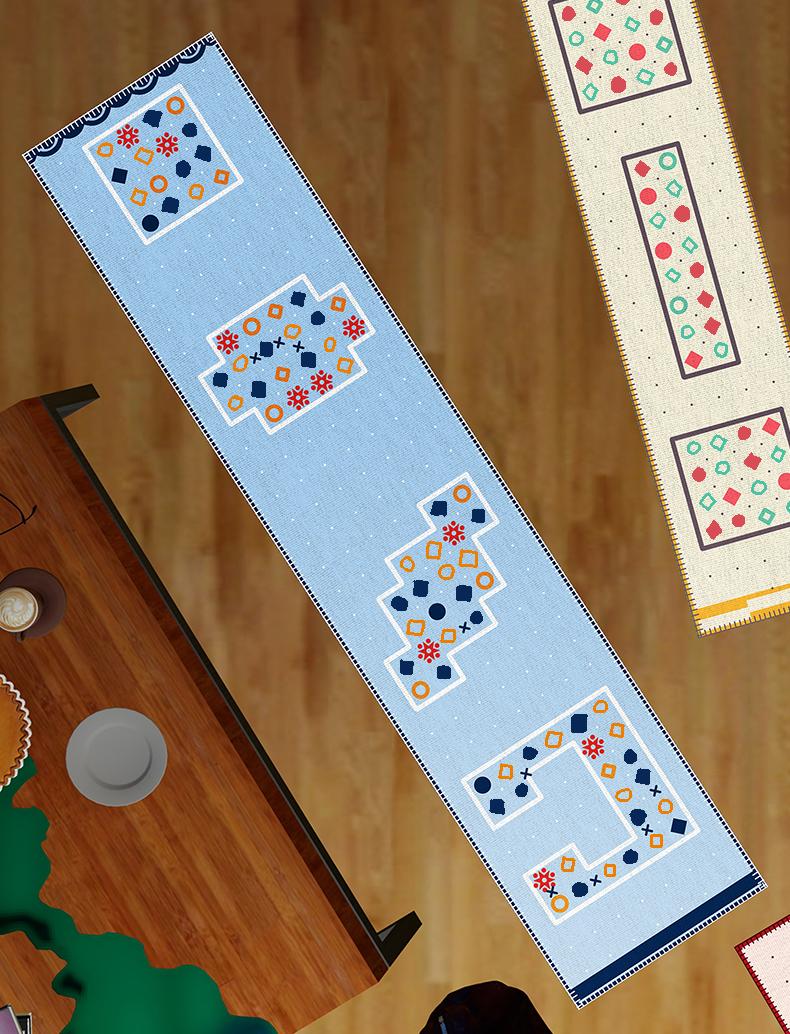 The puzzles on this grid are subdivided into multiple subpuzzles. What this means, is that both the complete puzzle, and each of the subpuzzles should satisfy all the previously indicated rules. This lets us solve three of the puzzles: 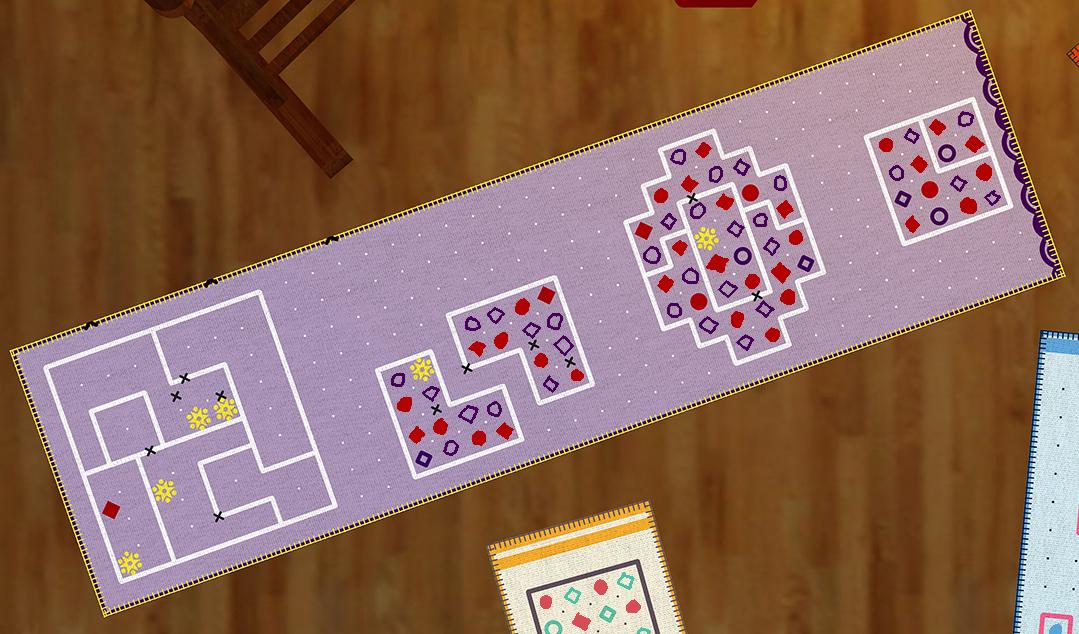 The last puzzle seems a bit too hard though... Maybe we are still missing some observation...

At the start of this answer, I wrote the following observation:

"7 of the blankets contain 4 grid puzzles each, and there is one additional blanket (at the right), which is probably needed for the extraction of the answer."

It turns out that this was not completely accurate... Note that on each of the blankets, the no-adjacent-equal-symbols-rule also holds for adjacent puzzles. If these were really separate puzzles, we would expect this rule to fail in one quarter of the cases. Conclusion: there is actually only one puzzle per blanket.

Actually, something even stronger than this turns out to hold. We can put all the blankets next to each other (using the boundary patterns to line up the different blankets), and then this large combined blanket contains only one puzzle in total! 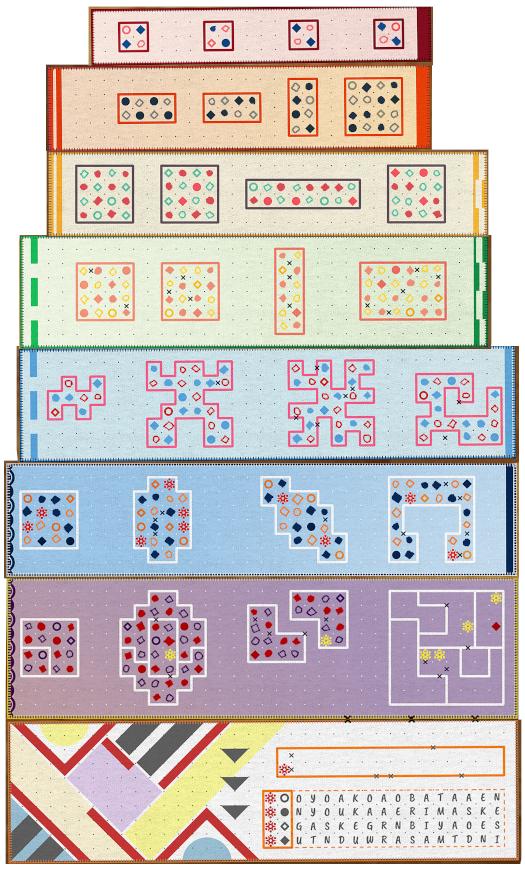 adjacency information that this combined puzzle gives us, we can make quite some progress: 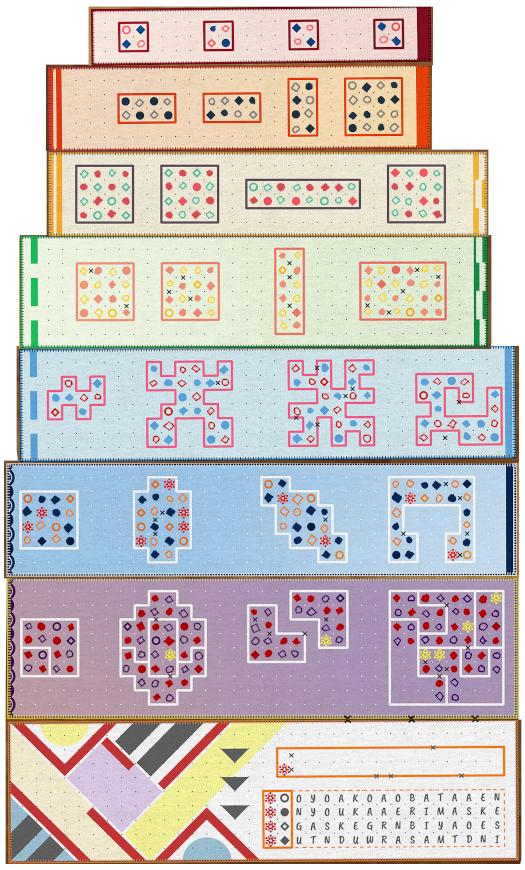 We can also combine this with the last grid on the last blanket (note that this blanket actually contains two grids, one already completed). Using all the crosses (including the cross in the third grid of the seventh blanket, thanks athin for the hint!), this allows us to solve the puzzle! 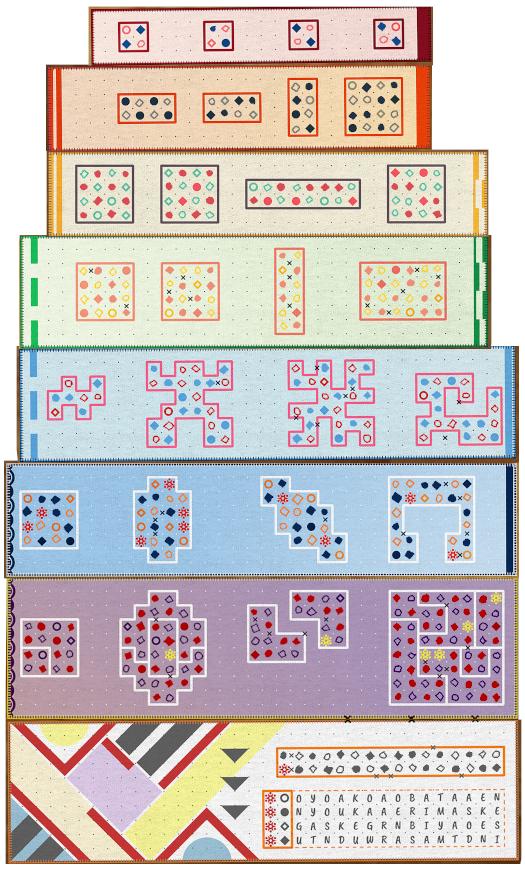 The puzzle is completed!

Using the table at the bottom of the last blanket, we can translate each of the symbols in the puzzle on this blanket into a letter. This gives the following result:

This seems to be a text in some language, and googling the second part of this answer shows that nanakorobiyaoki is a Japanese idiom.

So now we know the final solution!

It is GYODEWAARIMASEN NANAKOROBIYAOKI! However, I don't really understand Japanese myself, but luckily I have Google translate:

Some more notes on the final answer

As mentioned by athin in a comment, the first line is supposed to translate to "Not this line/row", hinting that this is not actually part of the answer.
Furthermore, a more literal translation of the second line is "falling down seven times, getting up eight times." (thanks Adam S!). This is extra applicable if we consider that there are exactly 8 blankets!

Not the answer you're looking for? Browse other questions tagged logical-deduction enigmatic-puzzle visual grid-deduction seasonal or ask your own question.