Fairy Chess is a genre of chess composition where the rules of normal chess are altered. This is typically done by adding new pieces (e.g. borrowing the cannon from Xiangqi) or changing the way pieces interact with each other. Googling is left as the proverbial exercise for the reader. However, I am not aware of Among-Us references being used in fairy chess – thus I am happy to claim the “sus-piece” as my own invention 😊

A sus-piece moves like a normal chess piece, except if a player chooses to move it then his opponent gets to choose the destination square. For instance, if White chooses to move his sus-rook then Black gets to call which of the seven legal moves is played. If White wants to play any other piece then Black cannot demand White move his sus-rook instead.

Sus-pieces retain their normal checking powers. For instance, after 1. Kd2 Bf4+ White must get out of check. Similarly, 1. Kd2 Rd7?? is illegal.

White to play and mate in 2. For extra credit, give all tries i.e. moves that fail to exactly one Black defence. 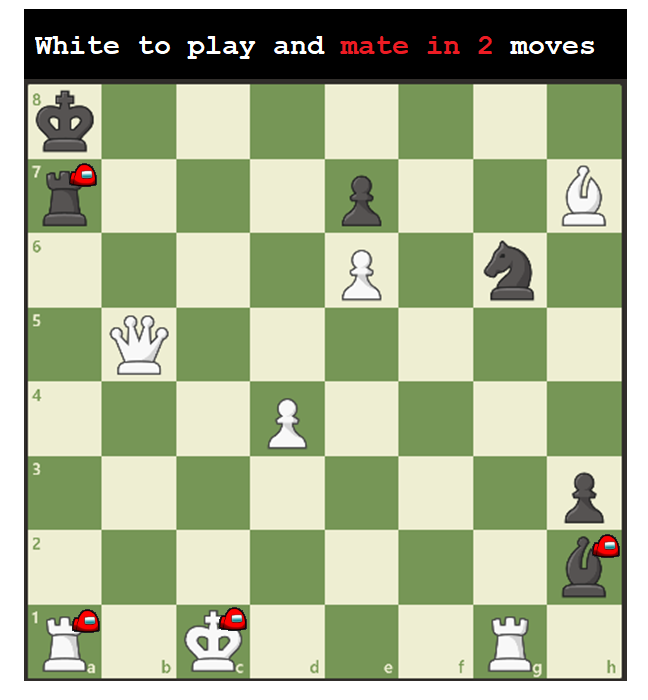 In the last two lines white chose the destinaton squares of the black R/B as per the rules. The mate on a2 is the white rook's only legal move in that position, so black's choice there is a non-choice.

As far as I can see most other approaches fail to