This puzzle is part of the Puzzling Stack Exchange Advent Calendar 2021. The accepted answer to this question will be awarded a bounty worth 50 reputation.

I lived with an elder brother. He was always friendly and warmhearted, and we always played together. It was him who introduced me to puzzling. Sadly, he passed away earlier this year, and naturally, I was heartbroken. Now, even though Christmas was just around the corner, I didn't feel like decorating the house, which was something me and my brother had always did together every year. A Christmas without him would never be complete...no matter how much effort I put into the decorations. In the end, I just bought some random Christmas related things and put them everywhere, trying to create a festive atomsphere.

What I didn't know was that my brother hadn't left me yet; instead, he asked to temporarily become my invisible protector before he finally left me. When he arrived at our house one night, he was shocked by how poorly decorated the house is. But then he had an idea...

That night, in my dreams, my brother came and left me a message. "Jerry," he said, "our house isn't looking great! But you just need to buy two more things, and it would look much better! I won't tell you what they are, though. Instead, I've built a puzzle using the things you have bought--count that as a final birthday gift from me. Go, crack that puzzle! And for the final time, merry Christmas!"

When I woke up the next day, this is what I saw: 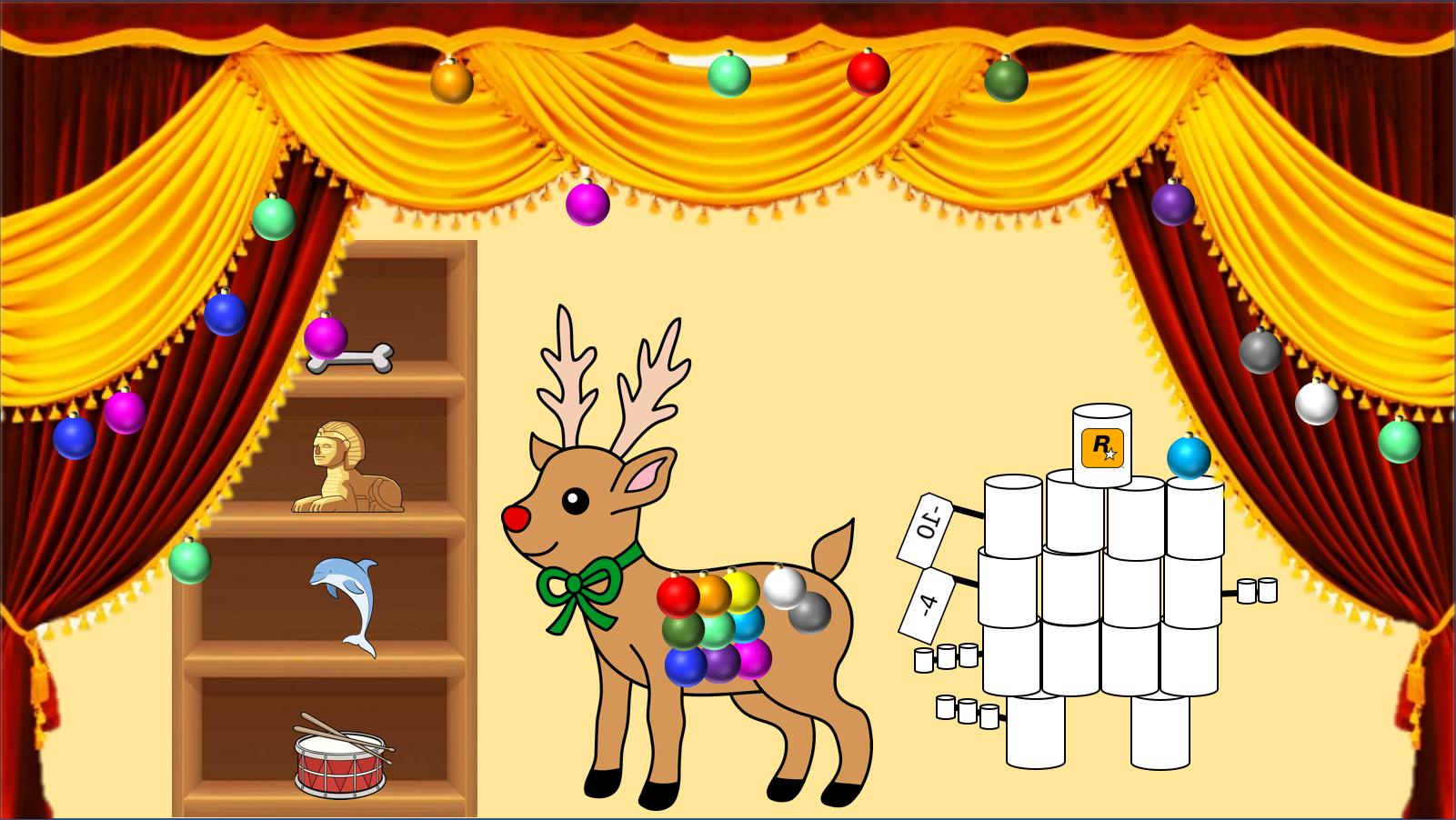 What are the two Christmas related things that my brother asked me to buy?

-The marshmallows seem a bit too blank. Try to fill them up. Be brave!

-My brother would've liked to hang two more balls on the reindeer, but he couldn't find balls of other colors in my house.
-Most of the elements in the picture are useful in solving the puzzle, but none of them are used twice.
-I just added some tags.

Partial answer, dealing with the marshmallows.

if you take the names of the items on the shelves and put them in the available spots, you get (lower case letters in the small marshmallows).....

Then, the first two rows

Do a caesar shift in the number of characters shown

All of the resulting letters give

Which is an anagram of

The REDU should be backwards (the reflected -10 indicates that. Thanks Gareth McCaughan for pointing the obvious out to me.), but if you do that and then trace the letters in the order of the anagram (RUDOLPHREINDEER), starting at the top...

The shape of a Christmas tree, so that must be the first item you are tasked with getting.

I think I got part 2

If you take the first moderate hint, you can realize that

the ornaments on the reindeer look kind of like a pigpen cipher that is missing the bottom left two parts of the second diagonal grid!

look at the ornaments on the curtain, reading left to right and matching colors to their corresponding grid location on the reindeer

if we take the upper ornaments being without the dot, and the lower ornaments with the dot

we end up with

Not the answer you're looking for? Browse other questions tagged word enigmatic-puzzle cipher visual seasonal or ask your own question.