Three answers must be thematically shortened before entry in the grid; wordplay gives the shortened version. The contents of one cell in the completed grid should be suitably replaced to highlight the cause of the problem. 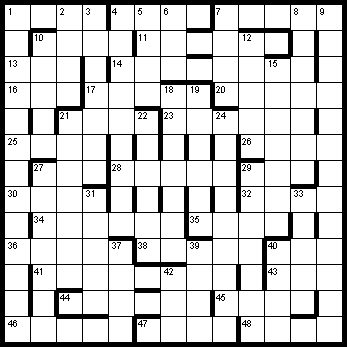 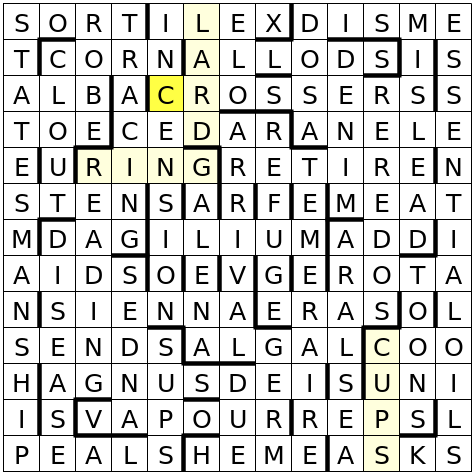 Answers and explanations (with a few gaps, for which see the "quibbles and confusions" later):

What has happened to the highlighted lights?

"All the BOARDs did shrink." (Each instance of BOARD in the answers has been replaced by one of the letters of BOARD, or in one case by nothing at all.)

And what caused this unfortunate state of affairs?

The Ancient Mariner has been cursed for killing an albatross. Another conseequence, as we would find by suitable modification of the yellow square, is that "instead of a cross, the ALBATROSS / about my neck was hung." (I've left it unmodified, contrary to the rubric, for the sake of clarity.)

A few other remarks:

The clues and answers contain a good deal of salt and sea and ships. Also, the words "a painted ship" in 24d also appear in the Rime of the Ancient Mariner. (Maybe there are other quotations, but I didn't spot them if so.)

Quibbles and confusions (now including some explanations from OP):

There are several indirect anagrams. Booooo!
11a: surely ALLODS doesn't mean "old sovereigns"? An allod is land that you hold freely; you are maybe sovereign, but the allod isn't. (I did wonder whether maybe there are such things as ALLOBOARDS, but no.) [OP says this was just an error; fair enough.]
14a: surely the cops are ROZZERS, not ROSSERS? [OP tells me ROSSERS is in Chambers, and indeed so it is.]
28a: ow ow ow ow ow. (Maybe I should explain this one for the benefit of anyone who didn't get it, though really you're better off that way. In Marlowe's play Doctor Faustus, Faust gets Mephistopheles to provide him with Helen of Troy as his lover. Seeing her, he exclaims "Was this the face that launched a thousand ships, / And burnt the topless towers of Ilium?". Topless towers would be OWERS, don'tcha know, and owers would be debtors.)
44a: this must be VAPOUR which can mean to bluster, but I don't understand the wordplay. (In comments Jeremy Dover suggests that it has something to do with the band The Vapours, who had a hit called "Turning Japanese". Plausible, but still not clear how it works.) [OP explains that this is another terrible, terrible pun: if they're Turning Japanese then they're ... Japanese Turners.]
47a: wordplay-wise this seems like it should be HEME (substring), but I am entirely at a loss as to why that would be "Ed's residence" (and there are no letters of BOARD to expand, not that that seems like it would help). [OP clarifies that Ed is Edmund Spenser. Duh, should have thought of that.]
5d: sorry, don't understand the wordplay here at all. [OP explains that this is TEMPLAR minus TEMP, though I'm still not quite clear why "finally" = TEMP.]
10d: I guess C is "speed" (which I don't much like, but it's pretty common) but I don't see how to turn "nut ignoring injunction" into LOUT. I guess we want to remove DO or DONT or some legal term from a word indicated by "nut", but I don't see it. [OP explains that this was CLIP ON NUT ("clip" = speed, and I guess "on" is a sort of reverse-cryptic thing) with IN and PN -- in + junction! -- removed; I think "injunction" meaning "take IN and a kind of junction, and remove those letters from random places" is a bit too clever!]
24d: of course I see why TEMERAIRE is "a painted ship", but I don't understand "seen on current scores" at all. [OP explains that it's because Turner's painting is on current twenty-pound notes!]
29d: what happened to the T of "salt"? [OP explains that salt -> sal, so another indirect anagram.]
42d: I really don't like "initially" for "first three letters of"...

For the avoidance of doubt, despite the quibbles above this was a fun solve, and the thematic trickery made me smile when I figured it out.

Thanks to Jeremy Dover for explaining, in comments below, things I'd missed in 10a and 9d, and for a plausible suggestion for part of what's going on in 44a. And thanks to OP for explaining all the rest!