You come to the door of the stronghold. You recall what the scriptures say: You must speak the right words, and the door will open. But what words? It doesn't say. You have a look at the door in front of you; something looks a little... off? 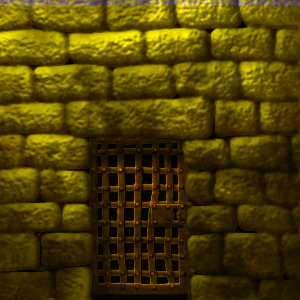 The scriptures also say that the entrance may be guarded by a particularly dangerous serpent, but you see no sign of that.
Can you find the magic words you must speak?

Author note: This has two parts. Both are close to impossible without programming knowledge. Note the computer-puzzle tag!

The magic words are:

The top part of this image is coloured slightly differently from the rest of the image. If you extract the blue channel from the file's RGB data and collect all the non-zero values, you end up with a series of 1630 bytes (100, 101, 102, 32, 112, 111, 115, ...etc...). When these are converted to ASCII characters, they correspond to a Python program that converts a line of text into a hash value and compares it with a precalculated result.

(Actually, there are other strings that would have worked, like 'agiam estm', but they don't seem quite as likely.)

Not the answer you're looking for? Browse other questions tagged steganography computer-puzzle or ask your own question.

3
The door of death!
32
The Time Machine works but my friend is gone!
49
Ron couldn't quite put his finger on… something?
75
This is it. This is the one. Save your wife
12
Sheerluck Helms and the STRIKE Assassin
13
What is the password in the image?
25
A Racing Heart!
4
Falcon Circus, Chapter 2: The Wise
25
The Ballad of the Dragonborn
11
Not so boring numbers