Based on Xkcd's Boat Puzzle

At the riverbank, a succession of people have given you a large lump of objects to transport across the river. These are:

Further complicating the matter is the runaway trolley heading towards you at breakneck speed, and your small boat that can only carry 4 things, including yourself (the swarm and colony each count as only 1 thing, while the cabbages count as 101 separate things).

What is the fewest number of crossings required to get across the river intact?

It is not that difficult, actually. The number of crossings required is ...

And here is how to do it. 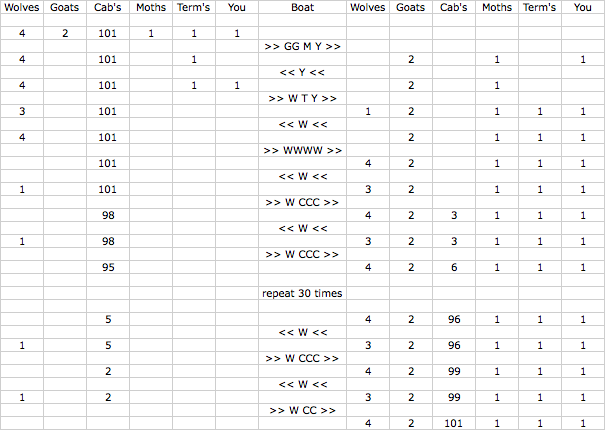 The first thing is to isolate the goats and the moths from the wolves and the cabbages.
This solves all potential conflicts on the left side.

Then you go fetch the termites and the sailor wolf.

From now on you must stay on the right side to look after all these animals.
Send the sailor wolf collect the other wolves.

The trolley can dump into the stack of cabbages.

I have a completely different answer. I'm not sure if I'm reading too much into the wording or if this is the real intention of the question.

1 trip with only yourself on the boat.

What is the fewest number of crossings required to get across the river intact?

It's a trick question. The final line only requires yourself to cross "intact". The objects don't matter.

It's overcomplicated because there are many details that don't matter which makes it more complicated than it needs to be.

Not the answer you're looking for? Browse other questions tagged optimization river-crossing or ask your own question.