You are finding 3 places. 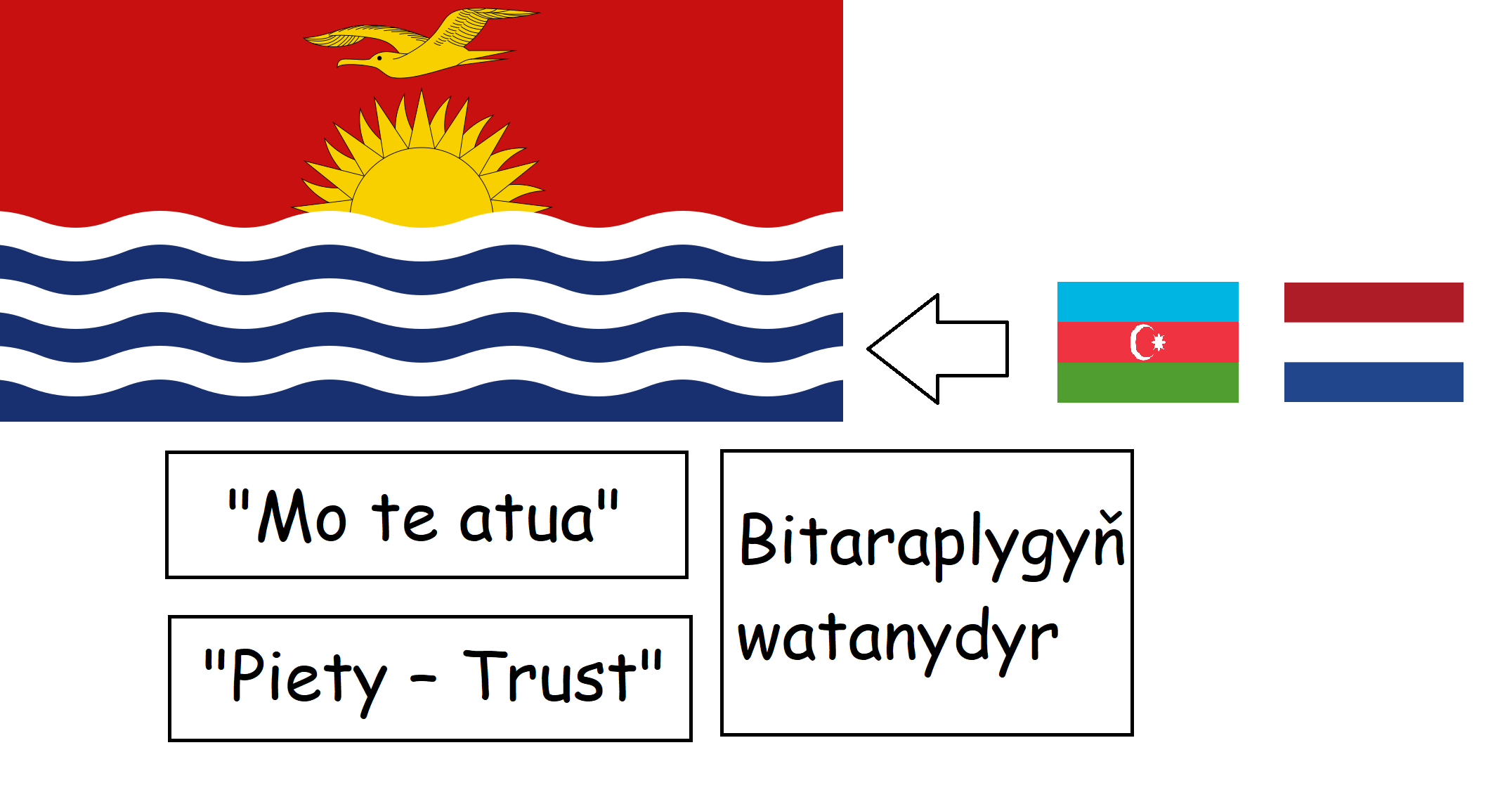 Also, Kiribati's flag is for checking if you got the "places" correcct.

Kiribati's flag has water in it. Its useful. 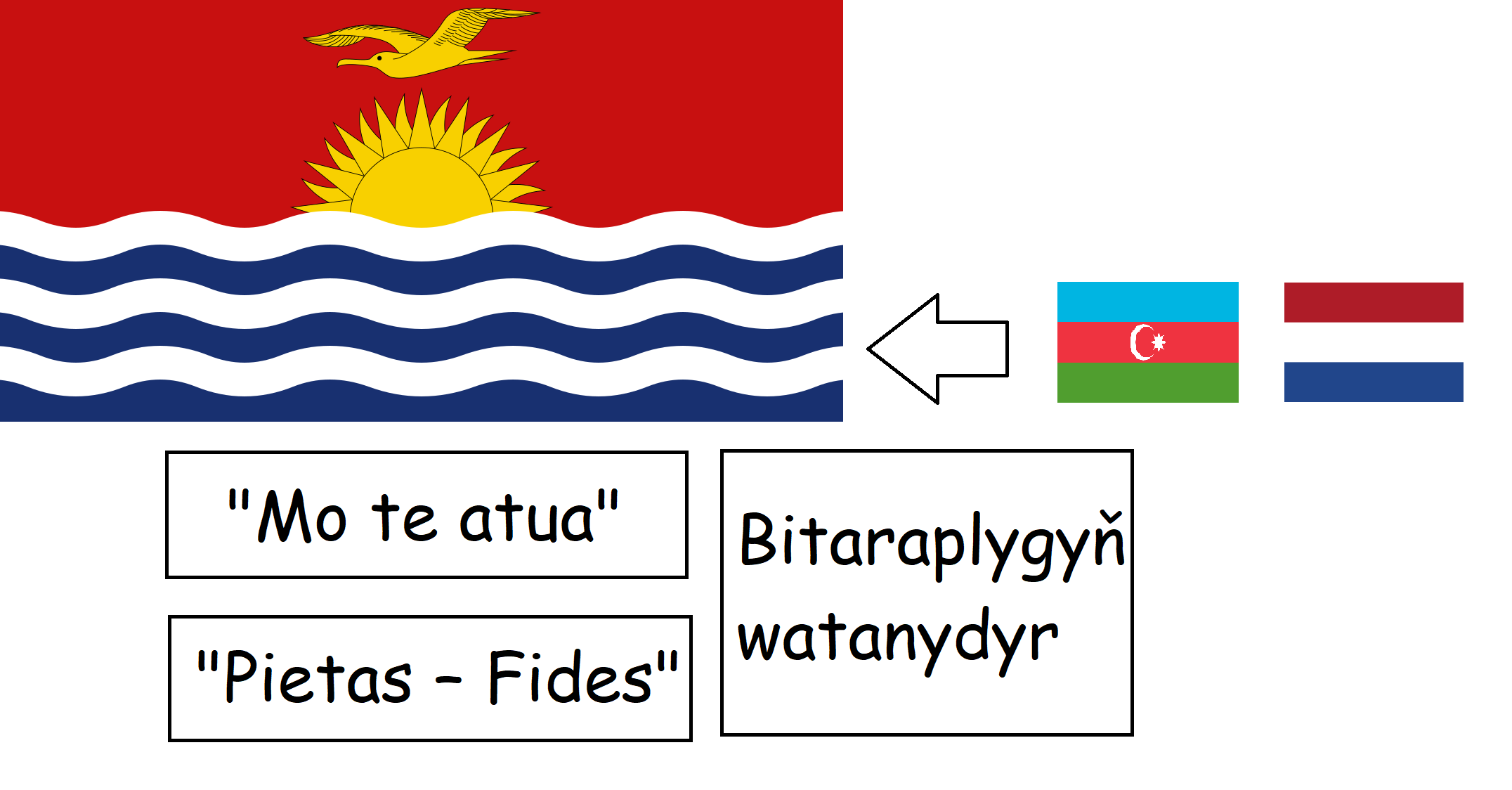 What does Azerbaijan and the Netherlands have to do with water?

If Bolivia, Ecuador or Colombia was pointing to Kiribati's flag, It would be on top of the image.

I've got the countries figured out, but there's five of them (six including Kiribati), not three:

Possible method of answering (especially given the title):

something to do with the two-letter internet domains for these countries. Interestingly, Kiribati (.KI) is exactly a 3-letter Caesar shift from the Netherlands (.NL), but between them is not Azerbaijan but Macedonia (.MK). Meanwhile, Tuvalu is .TV and Turkmenistan is .TM.

what I've got as Tuvalu could also be indicating TOKELAU (motto "Tokelau mo te Atua", but a territory of New Zealand rather than an independent state).

[Not a full answer, only some loose thoughts that are too long for comments. I'm building on Rand al'thor's answer here.]

The flag of Kiribati features sine-like waves and a bird over a rising sun. Kiribati is an island state in the Pacific Ocean. Its territory (Mostly "aquatory", really) is known for spanning both the equator and the antimeridian, but not the international date line.

The small flags to the right (Azerbaijan and the Netherlands) point at the sea. Azerbaijan's capital Baku is the lowest capital of the world. It is on the shores of the Caspian Sea, which is 28 m below sea level. Parts of the Netherlands are also below sea level, in particular the inland bay of the IJsselmeer.

We are told to check the "three places" with the flag of Kiribati. A wavy version of the Dutch flag can be seen near the horizon of Kiribati's flag. Some of the flags of Dutch provinces, notably Zeeland and Overijssel, but also the polders of Flevoland, have wavy designs. The city arms of Baku also feature waves, but they are not sine-like, but pointy.

Tuvalu mo te atua is the state motto of Tuvalu, an island state in the Pacific Ocean and nor far from Kiribati. What's interesting is that Tuvalu's coat of arms features a wave design like the one in the flag of Kiribati, albeit in gold and blue.

Justitia – Pietas – Fides is the state motto of Suriname, whose coat of arms also features waves, this time in white and silver.

The last hint mentions that those countries would refer to the top of Kiribati's flag. All three have coats of arms with a condor sitting on top of a shield, so like Kiribati's flag, they have a bird near the top. They are also in the Andes, which makes them places of high elevation. Bolivia is landlocked, but Ecuador and Colombia have sea coats, so they have points at sea level. (According to this list, they don't have significant points below sea level, though.)

Türkmenistan Bitaraplygyň watanydyr is the state of Turkmenistan. Like Azerbaijan, it lies on the Caspian sea and therefore has parts below sea level. Unfortunately, its coat of arms has neither waves nor birds nor sunrises: Among other things, it features the crescent of Islam and the former president's pet horse ("a source of pride to the people of Turkmenistan") in realistic, not heraldic rendering. (But the country's second largest city Türkmenabad features some waves in an Islamic shield.)

That's the title. Surely it hints at something. I have no idea at what. (But I note the A–Z and that Azerbaijan's two-letter cpountry code is AZ. Rand has already pointed that out, too.)

You are finding 3 places.

We are looking for unspecified "places", so not necessarily countries or towns. I think that none of these places is a country mentioned so far, because its flag or motto is in the question. My guess is that we are looking for three places that share some characteristic with the countries already shown.

So far, we have seen a hodgepodge of rather heterogenous characteristics. Some proposals:

The British Indian Ocean Territory is the prime example for wavy water in heraldic designs. It is not the only place with waves in its coat of arms, though.

I can't think of a third candidate, which will probably be identified by a third characteristic. Perhaps it's just Mount Everest as the highest elevation or, more likely, Lesotho, which is the country with the highest minimum elevation.

But that doesn't account for A–Z or Turkmenistan. Well, I'm out of ideas.

Not the answer you're looking for? Browse other questions tagged knowledge enigmatic-puzzle geography flags or ask your own question.

5
What does it want?
10
Troubles with a Rogue Circuit
29
Oh no, it's another safe!
15
Reverse Puzzling 5
19
Just another day in the Shack
8
Google (Maps) Hacking worldwide
33
Which country did my sister visit?
12
Lunch with my travel agent
9
Embassy Park - A Grid Deduction Puzzle
18
NASA analyzing message from space