This question is inspired by the Chameleon 8x8 tour puzzle.

In this puzzle, the piece you have is a "camel-eon". The camel-eon starts out as a knight, but it will transform into a camel after making its first move, then transform back into a knight after making its second move, and so on: transforming after every move. For example, here is a diagram of several moves of a camel-eon starting from the bottom left corner of a chessboard. Camel moves are marked in red, knight moves are marked in blue. 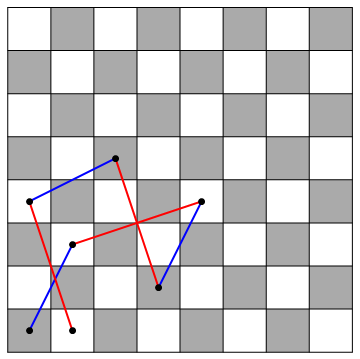 Can you find a closed camel-eon tour of the $8 \times 8$ chessboard? That is, can you find a sequence of moves (starting from anywhere you like - it doesn't matter) that visit every square exactly once, and return to the starting point?

To be clear, both pieces move by jumping: they go from the starting square of the jump directly to the ending square, without passing through any of the squares in between.

After much effort, I have managed to tame this beast. Here it is, with the red/blue color scheme: 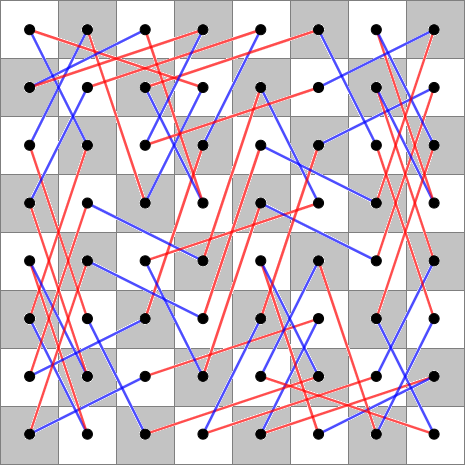 And here is more colorful version which should make following the path a bit easier: 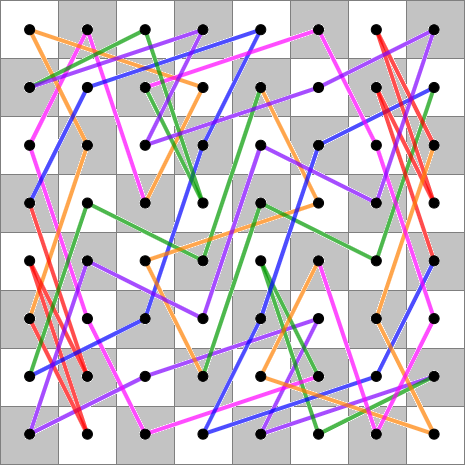 Of course, there may be billions of closed camel-eon tours, though most of them won't have such symmetry.

Not the answer you're looking for? Browse other questions tagged chess knight-moves or ask your own question.