The Golden Age of Sudoku 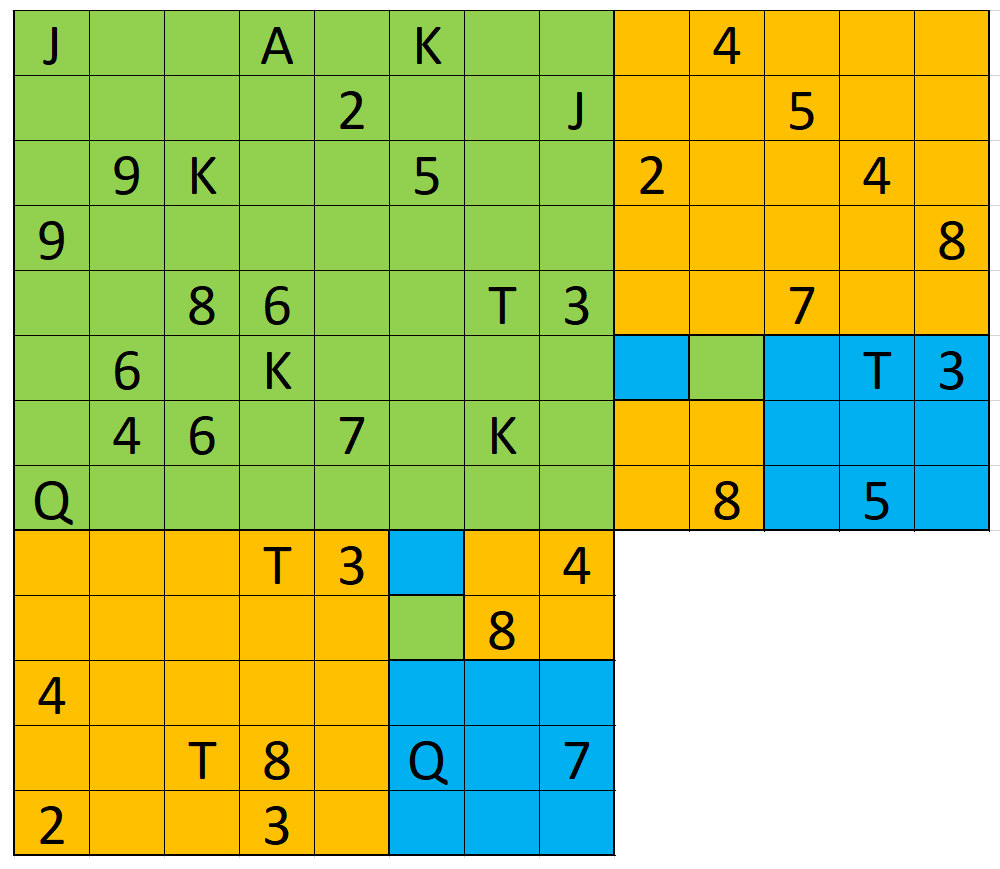 @AxiomaticSystem posted the solution (without explanations) just when I was just finishing the step-by-step write-up, and we seem to have reached the same solution (phew!), so here you go:

The easiest place to start seems to be the 3x2 box. (I'll try to always mention width first, that should give unique names to all the golden boxes.) The 8 and 4 fix each other's positions, and we actually know the missing digit: there's a 2 in the bottom left corner, so we must fit five 2s into the 8x5 box. They can't all go in the 5x5 square part, because column 5 already has a 2, so there must be at least one 2 in the 3x5 box. And if there's one, there must be three, which again won't fit in the 3x3 square area. So the missing digit in the 3x2 box is a 2, and we get to start the puzzle. 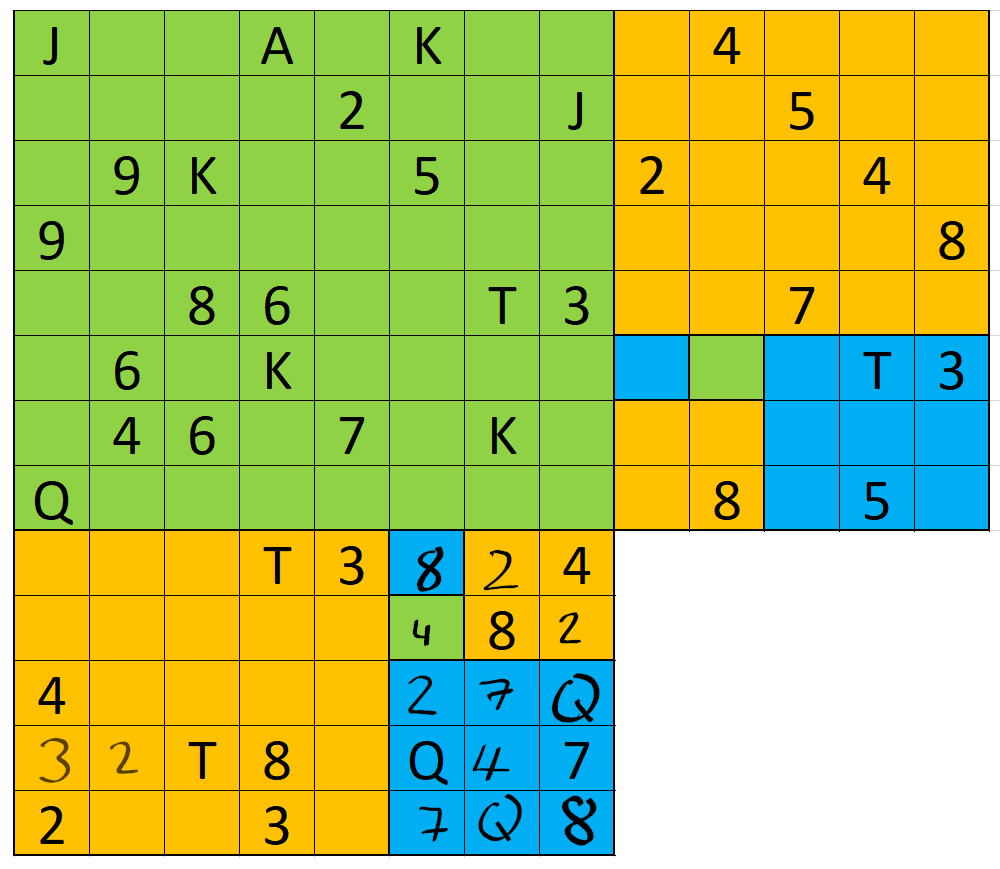 There's only one digit missing on row 12, and again, we know what it is: By the rules of the puzzle, the 13x8 box and the 8x13 box both must contain 8 sets of all the digits, so their contents are equal. Subtracting the 8x8 square from both, we get that the contents of the 8x5 box must be exactly equal to the 5x8 box. There's a 5 in the 5x8 box, so the missing digit must be a 5.

There are a couple of naked singles on row 11, so regular sudoku gets us most of the 8x5 box: 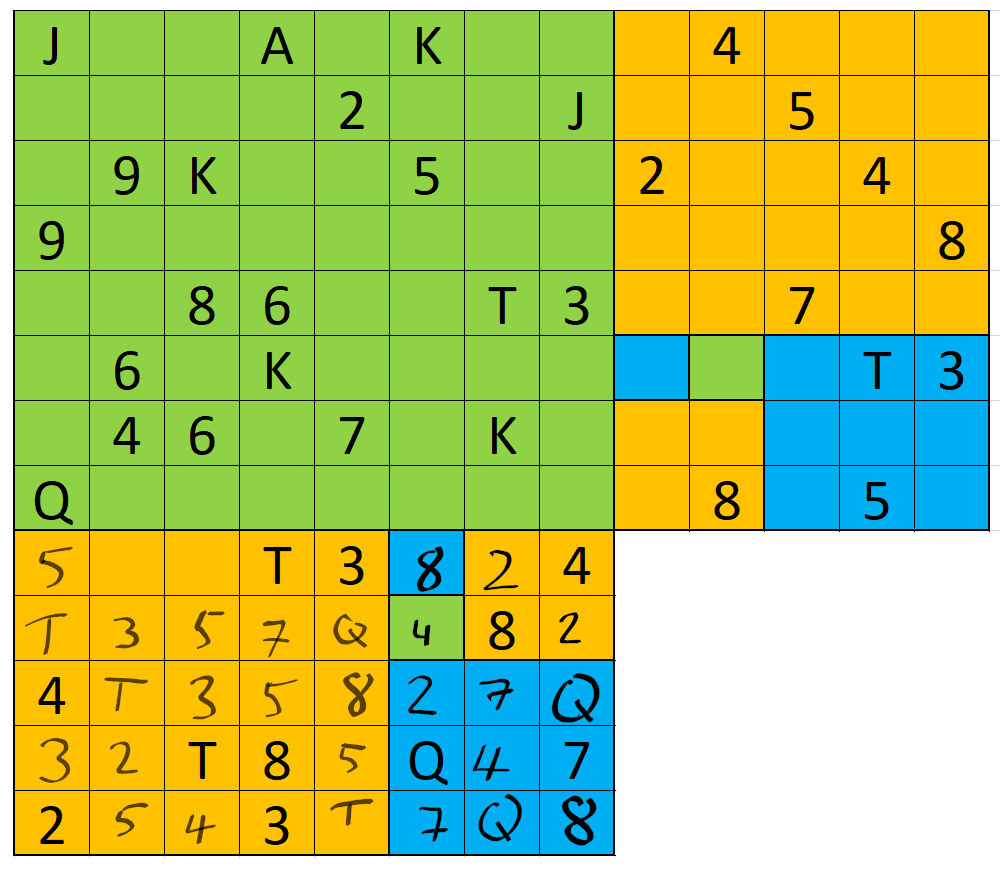 There may be easier break-ins to the other areas, but I managed to place the Q on row 7 first: it cannot be in the 5x3 box, because that would need two more Qs in that box, which is impossible, so column 4 is the only possibility. That leaves a naked single J in the same column. Applying the same login to the other Q and the 4s on row 6-8, we get a couple digits more. Also, the 3 and T in column 6 are forced into 2 squares exactly, which places the 6 in that column. 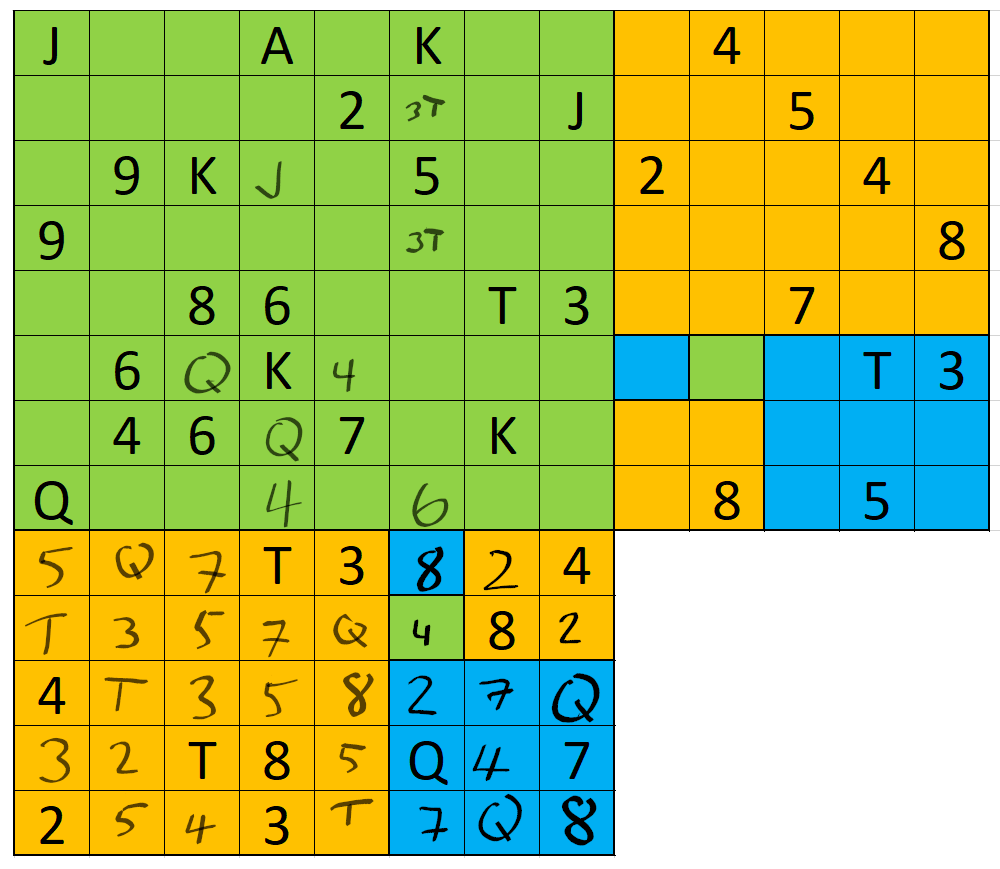 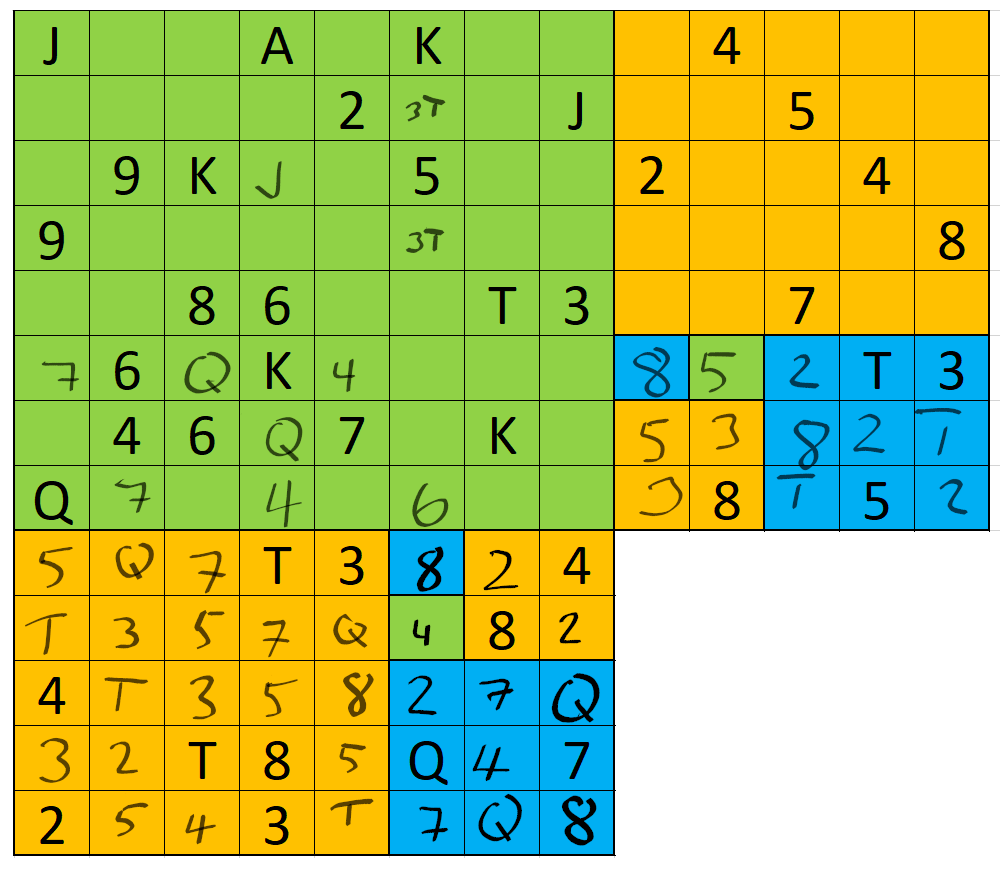 Now row 7 needs A9J, which we can place. The King in column 1 is naked (and single), and the 5 in row 5 is pushed into the 5x5 square, which resolves the row, and we're off and running. 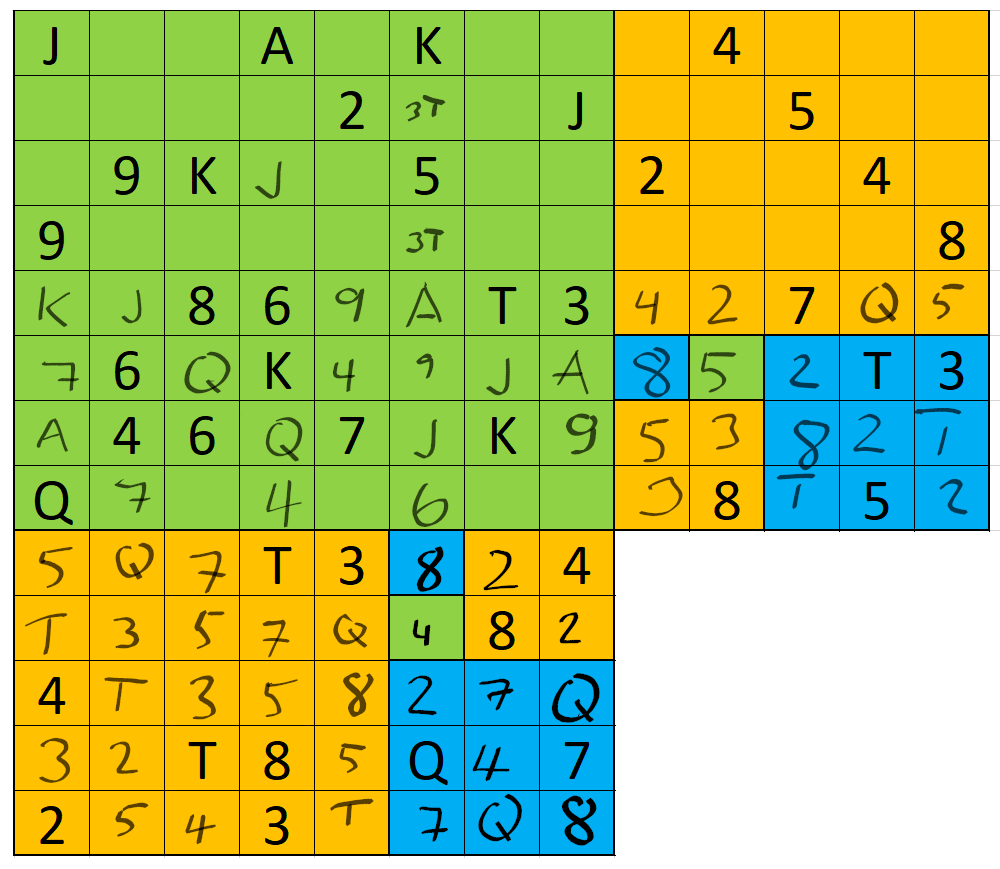 As usual, the rest is pretty much just scanning the grid and hunting for singles, which is made not a bit easier by the presence of all the extra digits. I've included a couple of phases, mostly as a backup, in case I've made a blunder along the way. 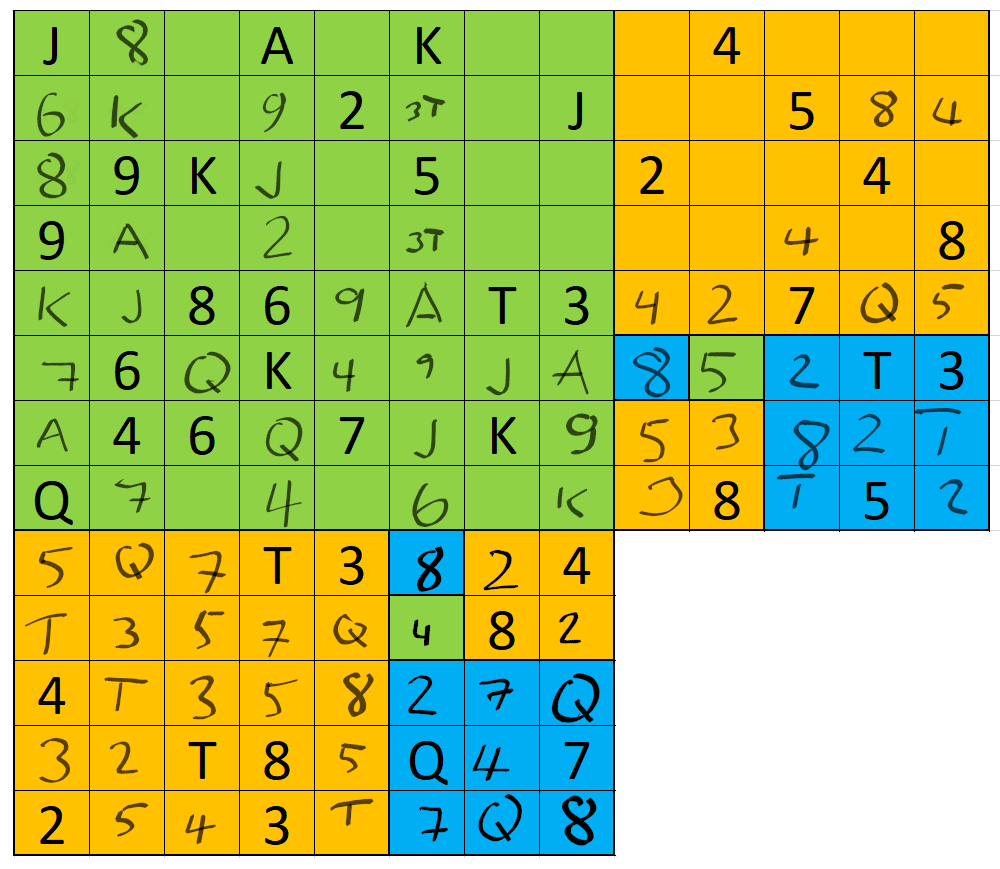 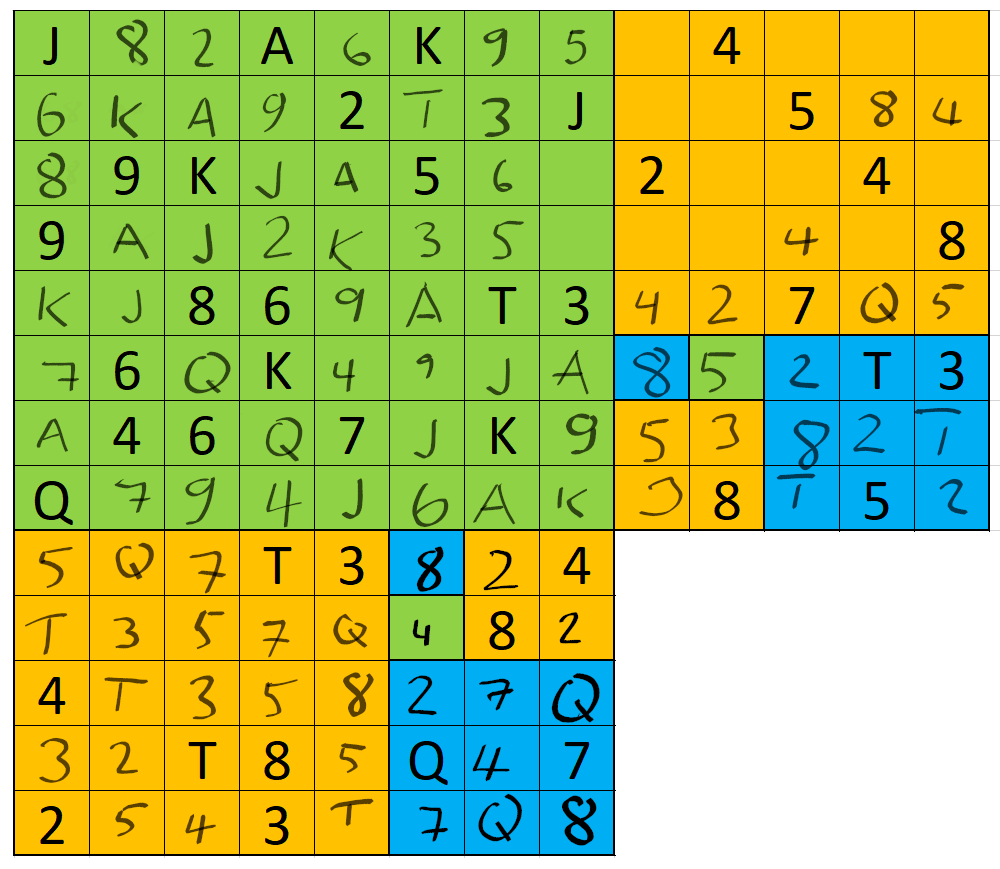 And here's the final solution: 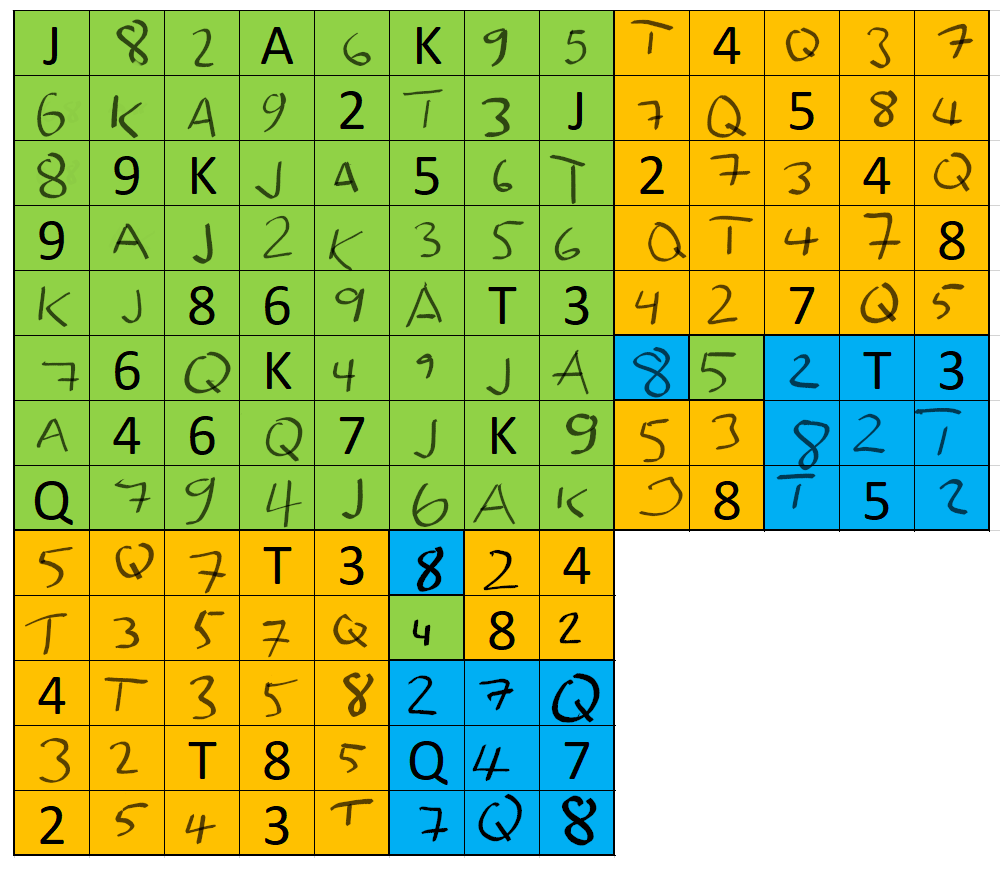 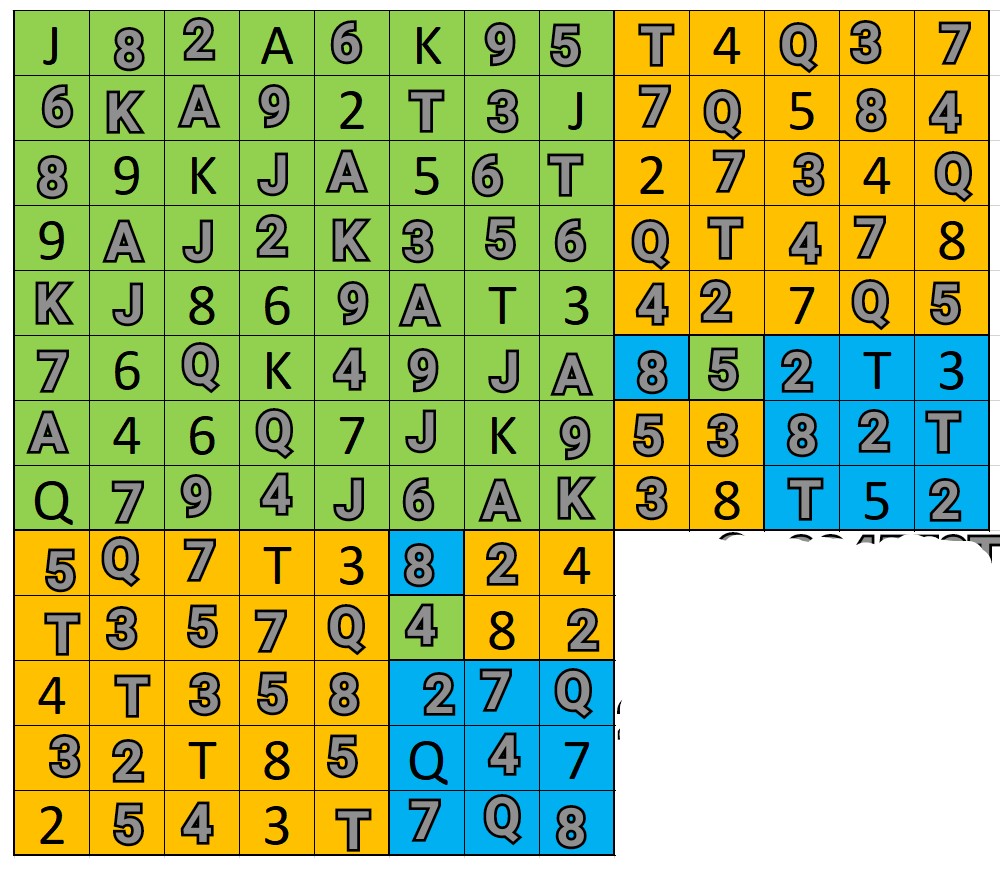 The first step in solving this puzzle is to determine which symbols belong to which regions, and much of that can be done as follows:

Consider the 5x8 region on the right. It has all of 234578T, so one symbol (call it Wildcard) is completely missing. Since 4 and 7 appear in the green square in row 7, they can't belong to the 3x5, and so the bottom 3x5 is missing either 2 or Wildcard. However, whichever symbol is missing from the bottom 3x5 must appear in every row of the top right 5x5, which means it cannot be 2 and must be Wildcard! This means that Wildcard cannot be any of A69JK and must be Q.
Similarly, the bottom region has all of 23478TQ. Its 3x5 has 478Q, and cannot have 3 or T, so either 2 or the bottom Wildcard is missing from it, and the same 2 from before forces 2 to be the 3x5's missing symbol. A69JK can't fill every column of the bottom left 5x5, either, so the bottom's Wildcard is 5.

Now that that's done (for now), let's fill in some numbers!

That brings us here: 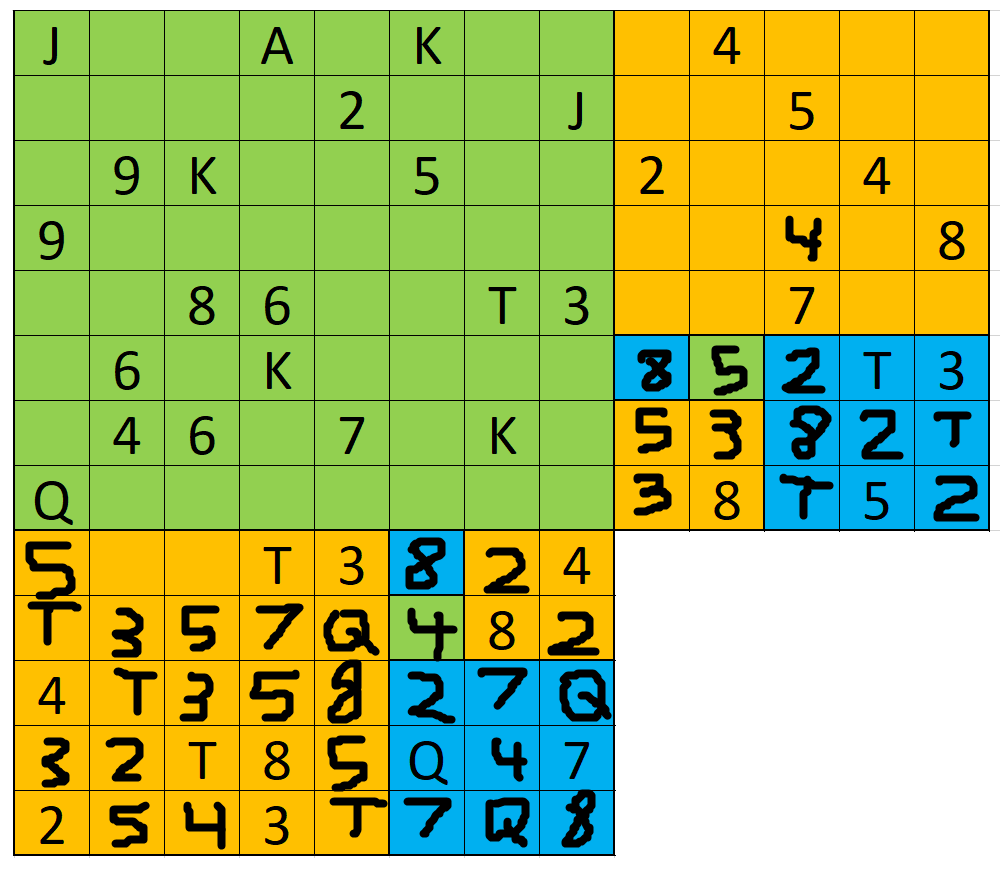 notice that A69JK aren't in either of the 5x8 subregions, so they'll magically fill the green square. In particular, these are the only symbols that can fill the central 3x3 area.
R7 finishes off easily: Q only fits C4 which forces J into C6, and CA only takes A which forces 9 into C8. Q in R6 must be C3, which fixed the remaining 7Q pair in the bottom subregion. R6C6-8 can be filled in using the restrictions on the central 3x3, which forces the remaining 4 and 7. Now R8's 4 is in C4, and R2C4 = 9 follows. A9JK in row 5 are now forced, since they can only go in the green cells. 2's position in R5 is forced, so 45Q can fill in the rest of the row. R2C2 = K, and since more of the central 3x3 can be filled in we can push 7 into R8C2 and allow C2 to be finished. An 8 in R2CQ finishes off CA.

Not far to go! 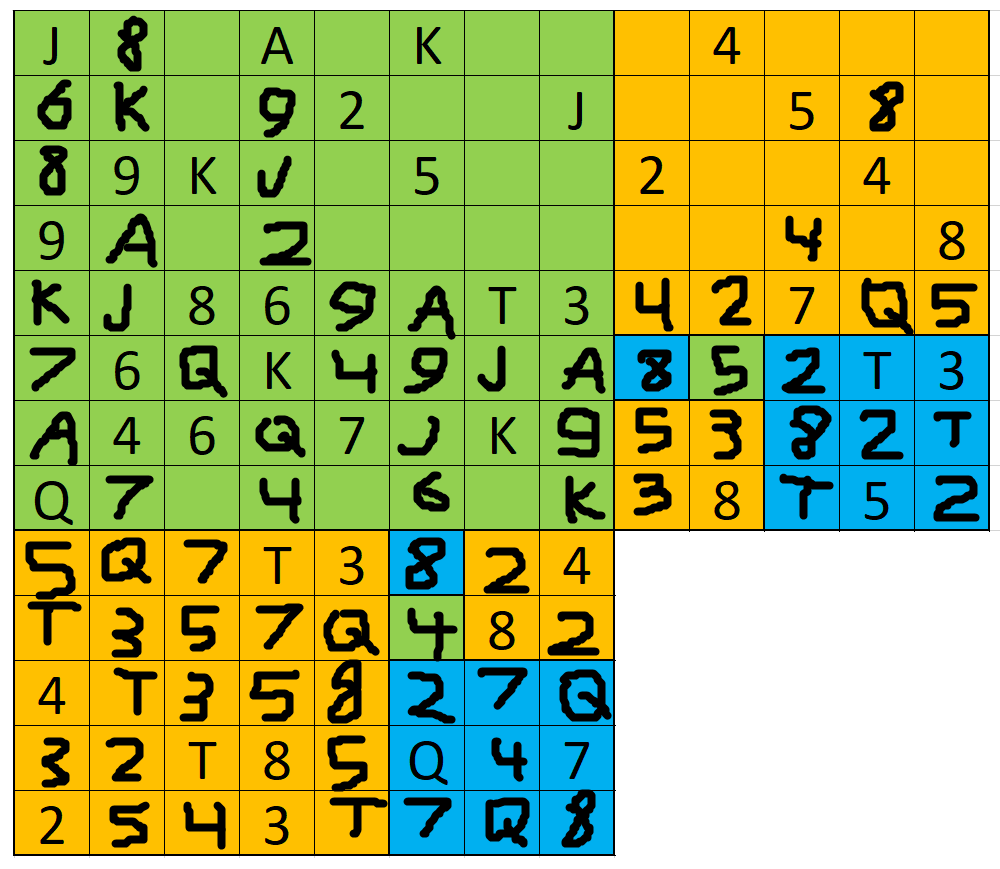 Only one 2 remains to be placed; column 3 and row 8 fall into place in quick succession. The last A is the key to filling in C5, and 9-5-T fill in RA. Finishing C7 gives the 3 needed to break the 3T pair in C6 and finish CQ, and a short cascade finishes the remainder of the puzzle!

Not the answer you're looking for? Browse other questions tagged mathematics logical-deduction grid-deduction sudoku or ask your own question.