Mason is improving at the game Battleship. He's got this current game in the bag, or so he thinks.

His opponent is Richard, whose method for placing his ships is completely random. Each side has 5 ships, and they reach the position below, where it is Mason's turn and Mason has sunk all of Richard's ships except for his Carrier, which is 5 units long. Richard has sunk only 2 of Mason's ships. 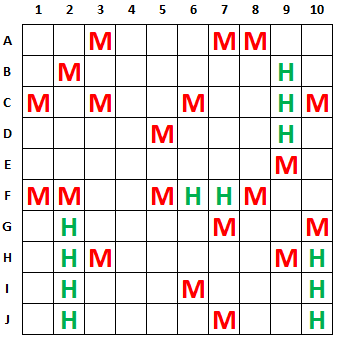 For the question, you can assume that Mason will win.

If Mason plays optimally, in how many moves can he guarantee victory? Also, can you explain your answer so that the vast majority of those reading it will understand it?

The max I've found is winning within

There are only 4 "spots" where the ship could be:

First you want to ignore the spaces who have less than 5 spaces above/below and left/right. After all, if there aren't 5 spaces, how is there going to be a 5 unit long battleship? 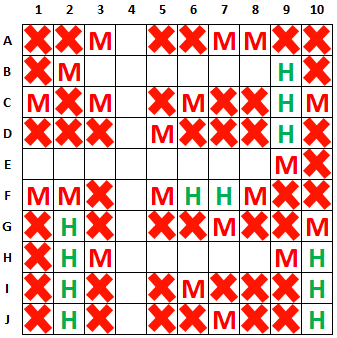 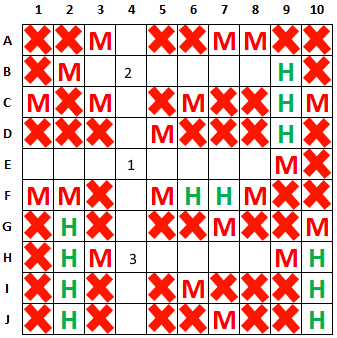 He is guaranteed victory in

Since the carrier has not yet been hit, we know that it must be in one of the spaces that are at least 5 squares long.

D4 and then continuing up the grid.
A miss on E5 means the carrier is vertical.
If these four vertical shots all hit, the carrier has been sunk using 6 shots.
If one of the shots misses, he fires at F4 and continues downwards until the carrier is sunk in a total of 7 shots.

B4
In the event of a hit, we know the carrier is horizontal. If it were vertical, $S_1$ would have also hit the carrier. 4 more shots to the right will sink the carrier in 6 shots.
If the final shot misses, one shot fired at B3 sinks the carrier bringing our total to 7 shots.

21
Picking up stones
20
Battleship- Best Next Move
3
Sink me and live
22
Monte Carlo Chess
5
Hnefatafl - a lost Art
8
Battleship Game with only one Aircraft Carrier
2
Taming a Bomb Puzzle (Part 3 of 3)
5
What is the optimal way to play standard Battleship?
14
Shooting them blanks (double optimization task)