The Tree is Growing

I just found this new type of puzzle and I think the rule set is fun! So, I decided to create one.

Rules (taken from the original puzzle): 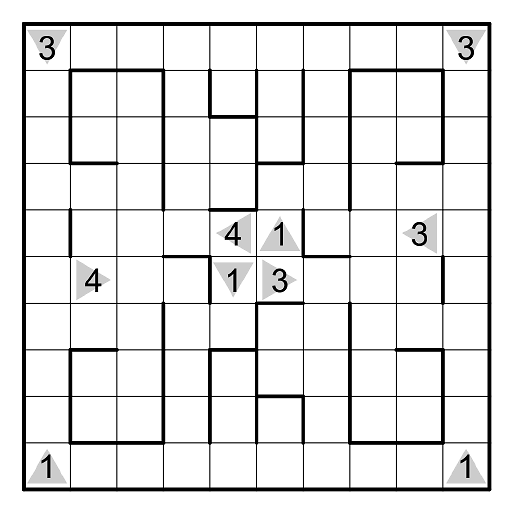 Kudos to scor for the original puzzle. You also can solve this on Penpa if you prefer online solving. Hope you guys enjoy it!

I feel like this is the intended answer but I found two places where lines could go either way unless I misread the instructions (for the green and blue leaves/stars).

UPDATE: I noticed the image in OP had two additional lines added to it, so I updated my solution, which is unique now. 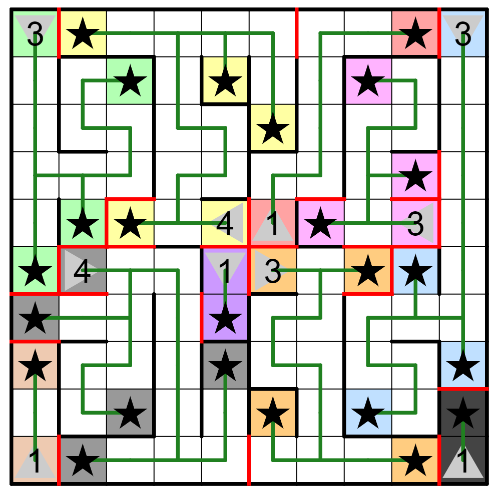 First of all, one thing to note is that no closed 2x2 alcove can have more than 1 leaf. If it had 2, both would need to share the row or column, and since there's only one entrance, they'd be on the same tree. (I'll call this the ALCOVE RULE)

We start by filling some lines and adding some leaves on dead ends. Trees greater than 1 should at least reach a square with a possible intersection, which forces the 3s on both sides to reach longer. 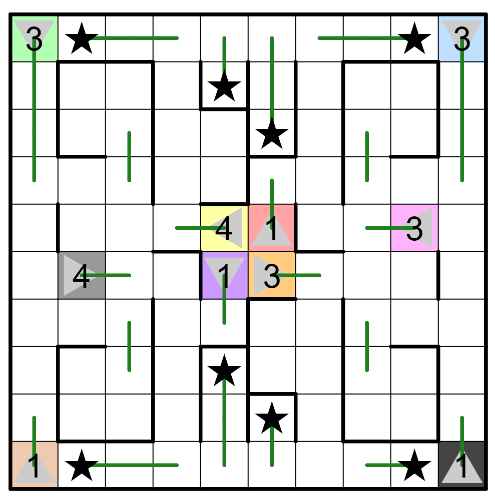 If yellow tree doesn't go into R4C4, the four leaves on the top rows will have to be attached to a 1 or a 3, due to the narrow pathway in C7. Yellow tree needs to pick at least one of them. On the other hand, it can' not go into R5C3 because if it picks all the top leaves two of them will be in the same row (R1C2 and R1C9). 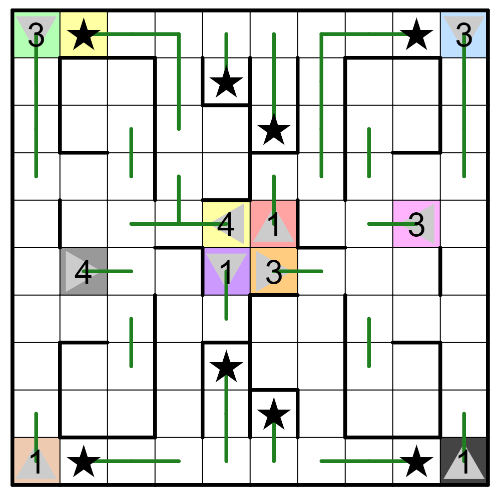 If purple leaf goes in R6C4, R7C4, R8C4, or R9C4, we'll get too many leaves on the bottom central area to join with the orange 3 tree. Thus, purple either ends on R7C5 or the marked leaf in R10C2. In any case, R6C4 must at least extend to its left. (I've also added red borders to indicate trees not joining each other). 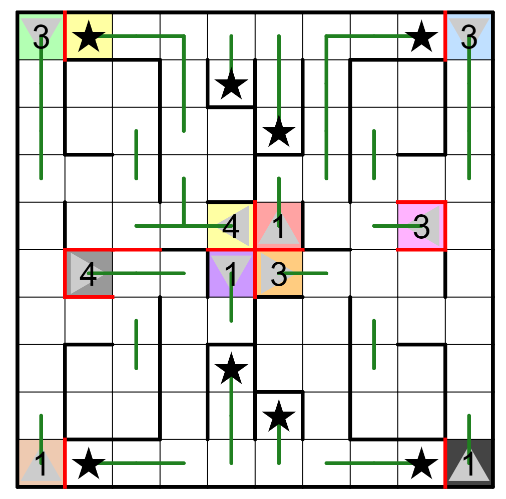 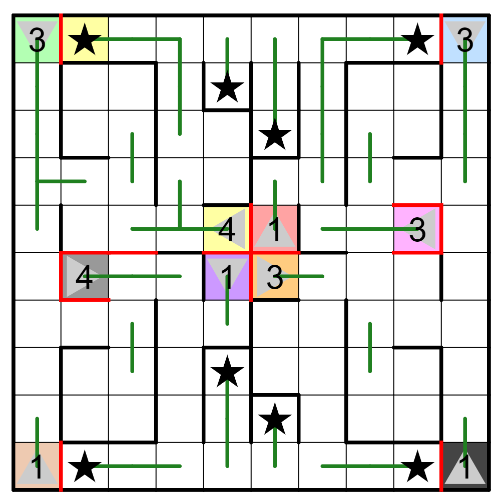 Blue tree must go down C10 due to the ALCOVE RULE too. It can at most fit one leaf by going into R4C9, so it must also extend to split once more (at least), thus reaching R7C10. R5C2 cannot be a leaf of the yellow tree as it'd be in the same column as R1C2. It must be a leaf for green then. This also means that R2C5 and R3C6 must be yellow leaves. If we count yellow leaves, we have: R1C2; one in the R2C2 alcove or in R5C3; R2C5 (we need to extend through R1) and R3C6 (we can't have one in the alcove above the tree as it would collide with R2C5). We also extend green tree at least one space in C1 to make space for the third leaf and have it not colliding with R5C2. 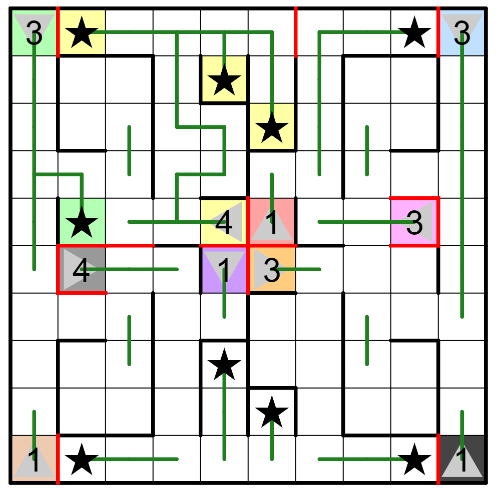 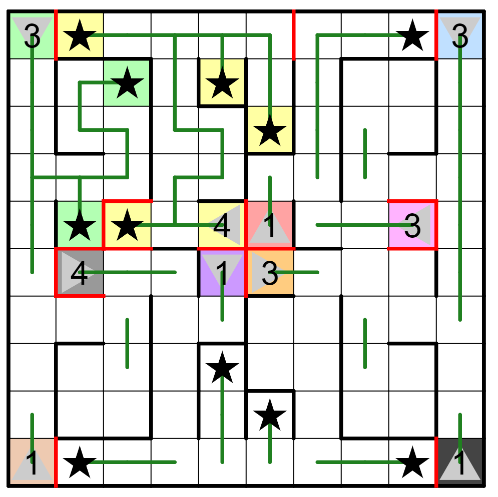 ALCOVE RULE means that light grey must go down C4, as it can fit at most a leaf in the lower left alcove and a leaf in C1 or C2. For its other two leaves it must reach R10C2 and R8C5 at least. This locks purple leaf too. Purple can't grab both R9C6 and R10C9 as both leaves in R10 would collide. It must then go into R7C3, and R10C9 needs to connect upwards, with the orange tree. 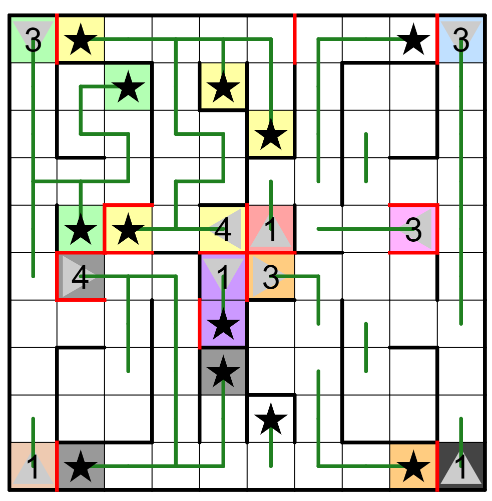 The grey leaf in lower left alcove must be R9C3. This means R9C6 can't be a grey leaf (it must be orange). The fourth grey leaf must go into R7C1 to avoid more collisions. This also fixes brown and green leaves. 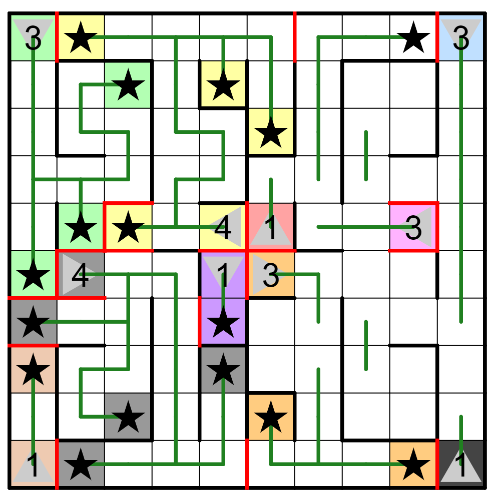 Orange must dip into R6C8 because it can't fit a leaf in the alcove below it (due to R9C6). Pink must then connect with R4C8 to make wiggle room for its 3 leaves. Blue needs 3 leaves which must be in different columns. The only place where it could have a leaf in C8 is in R9C8, forcing it to enter the lower right alcove. R6C9 must be blue too, as if it was an orange leaf it would collide. 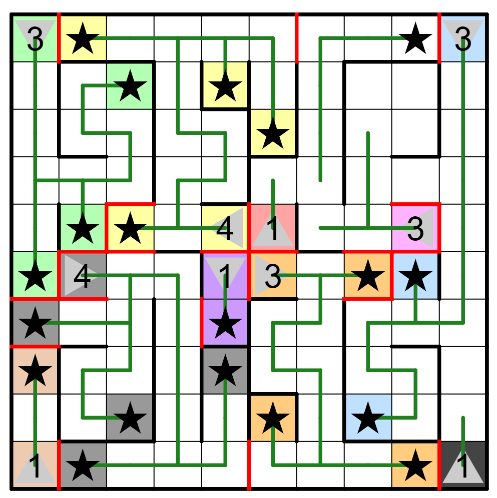 We're getting close to the end; the third blue leaf must go in C10, so the only place available is R8C10, which also locks the dark grey leaf. This gives us the pink star in R4C9, which means R1C9 can't be pink, it must be red. The places for the last pink leaves are tight, but they fit, giving us the solved grid:

16
Mini Ripple Effect puzzles
5
Where to pitch the next tent?
9
Fill this Rangoli puzzle
9
A half-shading Nurikabe
12
Cross the Streams: Three?
9
Sudoku: Episode 64 - Attack of the Clones
14
Cross ALL the Streams
10
Trio Tapa: Introduction
2
What's the next logical step for this Kakuro?
16
Ripple Effect ... with Inequality Sign