Pawns and kings, what is the optimal play for white? 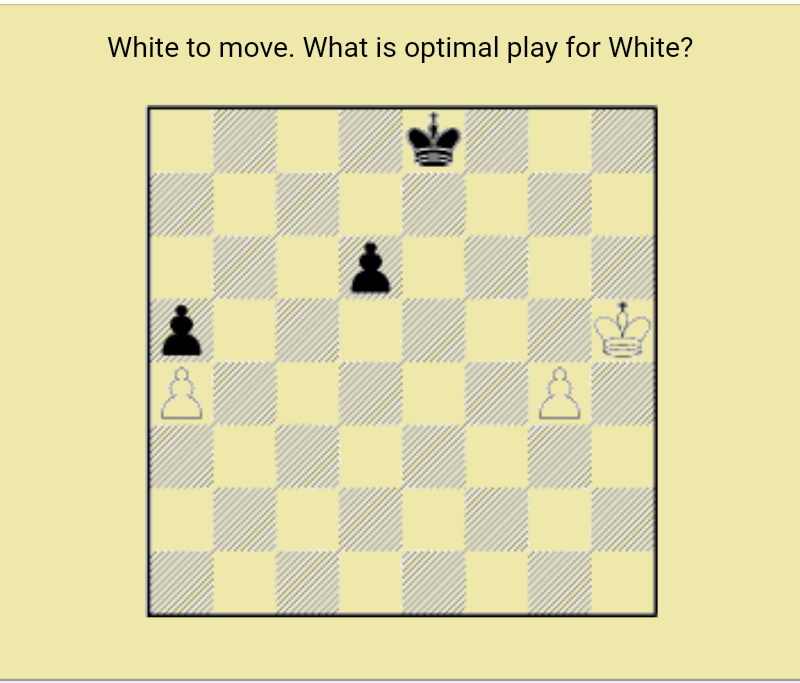 Ok, let's add a fourth opinion ;-) Please note that this is not trying to cover each and every line of play. Also, I should mention that this came to me while trying to figure out why @Gareth's solution does not work.

White has two ways of winning

Neither can on its own be enforced, see for example @TACO's counter to @nadapez's attempt to win with strategy (1) alone. Instead, both white and black should remain ambiguous about their strategy until the other side slips up.

What is enough of a head start in (2)? Let's for the sake of argument relocate the white king to g6 and the black king to e7. Interestingly, this is

a zugzwang position. Black to move loses while white to move must settle for a draw. Indeed, the black king and pawn are placed "optimally" in that white queening on g8 would do so without check and the white king has no direct path to capture the black d pawn but would have to waste a crucial tempo going via e4-d5. Similarly, the white g pawn is placed far out of the black king's reach and the white king's position is perfect to react to what black chooses to do. If black moves their king to e6 to support the d pawn white has g5 ... Kh7 and wins as the g pawn is promoted with check.

g6 because that would allow black to answer with Ke7 putting white in the zugzwang position. Nor should the g pawn move before it is clear it is racing against the black d pawn. The ambiguous and I think correct move would therefore be 1.Kg5.

There are, of course, lots of variarions left to check. And given how tightly blanced the position is they should be checked but that would still be tedious. I do think we have covered the key ideas and can leave the nitty-gritty to a computer (as I did to check this answer is broadly correct).

The optimal move here is to

One example of this can be done

During this black may shift focus to

either free their blocked pawn, or capture white's open pawn.

we must prevent promotion and either bring the match to a stalemate or if we should be so lucky, promote our pawns after preventing promotion, and take the game with a checkmate from two queens.

prevent the open pawn's promotion, it can also attempt to capture the blocked pawn, thus potentially opening their options back up to two promoted pieces which heavily increases their chance of winning.

promoting white's open pawn? This can be done by protecting it's route with the king traveling in the H file.

This can be prevented by

black in two moves. If white starts with Kh6, black plays Kf7. From here white has two options; Kh7 or g5. Playing g5 will break white's plan allowing black to play Kg8 and playing Kh7 leaves white's pawn open if black plays Kf6 on their next turn. However, if white starts with g5 then black simply plays Kf8 followed by Kg8 unobstructed, regardless of white's next move.

after @Gareth McCaughan pointed out in a comment that an online chess engine could solve it in seconds, I went to test the idea with Next Chess Move and it aligned with my idea (albeit taking a bit longer and a different route due to black playing its strongest next moves each turn) by capturing pawns. I won't chase the end game down as it will take a minimum of 15 more moves since black is about to capture white's open pawn while white is closing in on black's blocked pawn and white will have to force the black king to move around which can be agonizing.

[NOTE: After writing this, I checked with a computer. The following is wrong. I shall not say how it is wrong, of course. Nor shall I delete it, because I believe in not hiding my errors.]

It looks to me as if

White wins with 1. Kg6. The idea is to win the d-pawn while stopping Black getting to the g-pawn too quickly. Then while Black is tied up with the g-pawn White has time to get over to the queenside, capture the Black a-pawn, and promote the White a-pawn.

It's not much better

Black tries to stop W winning the d-pawn with 1. ... Ke7, then it doesn't look as if White can win with 2. Kh7 -- both pawns will promote, and the resulting position looks drawn. So instead 2. g5. Now there seem to be three things Black could try.

Key to this position is to keep black far enough from the g-pawn to be able to capture both black pawns and promote the a-pawn.

Not the answer you're looking for? Browse other questions tagged logical-deduction strategy optimization chess or ask your own question.