You have a straight line $l$ in an infinite plane. 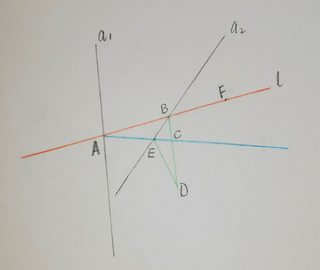 After the second fold, the shape has one cross point $C$, where the green segment and the blue ray cross each other.

Question: If you can fold the plane four times, what is the maximum number of cross points you can get?

because the maximal increments at the four foldings are

Here the powers $2^k$ arise as the

The number of pairs that can be formed among them. Indeed, each segment ("mother segment") will be folded into at best two sub segments ("children") and new intersections can only be formed between children not on the same side of the fold. Further, siblings cannot cross because their intersection lies on the fold. And finally of the children of any two mothers at most one new pair can be formed. Because the two candidates pairs (the two non sibling, opposite sides of fold pairs)---being mirror images of each other---intersect on opposite sides of the fold, hence at most one of them can be manifest.

This concludes proof (well, sketch of proof) that the number I give is an upper bound.

To construct a maximal example simply

make the first fold almost perpendicular to the given line. And the consecutive folds almost parallel to the first. We can then make sure the maximum number of segments is created by always bisecting the corridor left by the two preceding folds, We can ensure the maximum number of intersections by always very slightly deviating from the new fold being exactly parallel instead rotating it such the all the intersections with the previous fold can be separated from all the intersections with the fold before that by a line parallel to the given line.

Not the answer you're looking for? Browse other questions tagged mathematics geometry optimization or ask your own question.

4
Find shortest network connecting four points
7
Smallest number of matchsticks for a 3D structure with 6 matchsticks at each vertex
10
Connecting blue dots to red dots
12
Professor Halfbrain's second cutting theorem
0
Finding a line on a plane
6
Line segments inside a square
7
When is a robotic arm able to reach any point (closer than the length of the outstretched arm)?
21
An ant's walk in the Cartesian Plane
8
The Extraordinary Sky of Saddlestania