Clash of the Robinsons

"Ridiculous!" you think "What can be the odds? Either I'm hallucinating or the amateur writing this story plunged to new depths of incompetence." Both being equally likely you don't bother finding out which but just accept that after drifting aimlessly in the ocean on a makeshift float for days you ran into someone else complete with their own float and not much else. "Let's pool our resources!" you cry with as much enthusiasm as your addled brain can muster. "What resources?" comes the reply. "Well," you answer detemined not to let your new "friend" ruin the moment "let's start with real estate! Let's join our floats together." -- "Join them together using what?" -- "We can use material from the floats themselves!" you counter even finding the energy to draw a little scheme in the mud that covers your float. 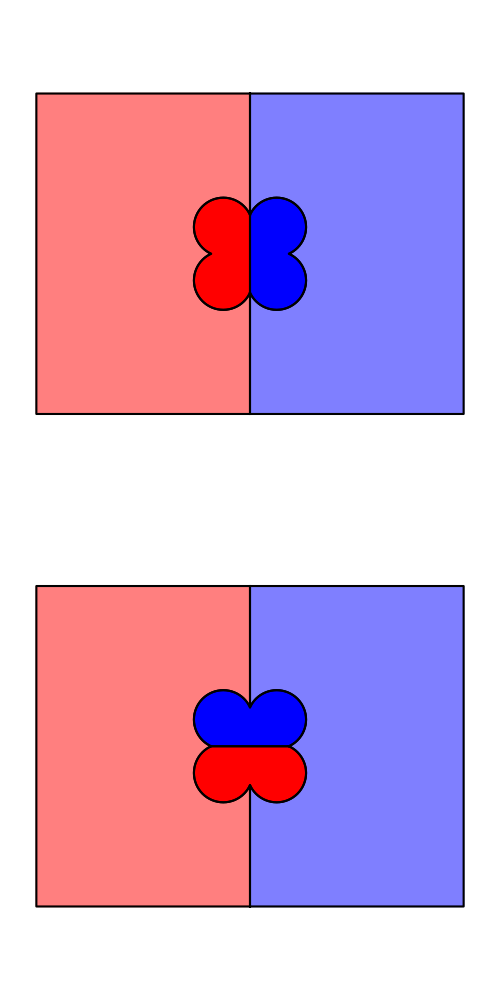 "With our primitive tools? The shapes are way too complex. The best we can hope for is cutting out simple convex shapes." The wretch started to seriously annoy you. He seemed to enjoy finding fault! But he had a point.

Will our two heros find a way to join forces or will they drift apart and die alone? Find out yourself, because this "story" will certainly not be continued...

from two equal side-by-side rectangles cut out as few and as simple as possible convex shapes that can be rearranged such that the rectangles be interlocked. Or prove that this is not possible.

It can't be done with two.

Our floating Robinsons can do this with $3$ pieces, but not with $2$

In this answer, I first show constructive examples with $4$ and then $3$ pieces, and then prove why $2$ pieces is impossible.

First, and easiest, we can do it in:

Using the principle of the:

The method is as follows:

Cut along the outlines of 2 non-parallel congruent rectangles that both cross the dividing line between the two main rectangles, neither being perpendicular to the dividing line, thus forming 4 separate convex shapes to be manipulated: 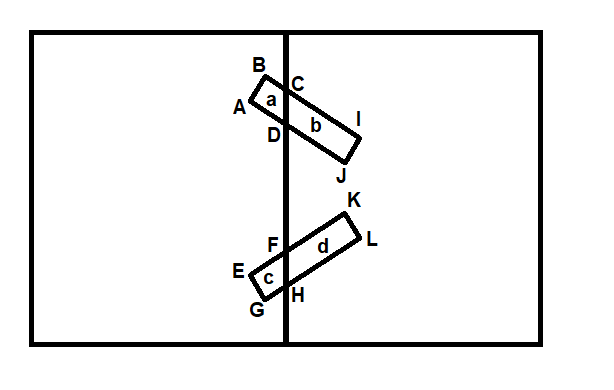 Apart from ensuring that the cut rectangles are the same length and width, you do not need to place them at precise locations or angles (as long as they are not perfectly perpendicular to the line dividing the two rectangles, and are not perfectly parallel, and as long as they extend sufficiently far to the right (wlog) the construction will work).

You then just need to rearrange your pieces.

Simply swap the pieces within each rectangle. We can do this with planar rotations and translations alone as follows: 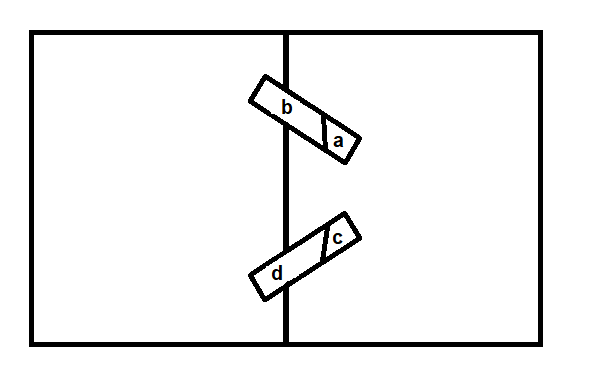 This works as long as we choose $|BC|<|DJ$ and $|GH|<|FK|$, in other words, our rectangles extend sufficiently far to one side of the join. There are other ways we could place these pieces to get the same result (including swapping between the upper and lower rectangles, and rotating the pieces so the front is now the back).

Now that we understand that method, how can we do it better?

We can do it in three pieces, by in some sense combining two of the pieces from the four-piece dissection.

Cut the wood as follows: Pick appropriate lengths $x$ and $y$ and any $\theta\in(60,90)$ and cut out the following three symmetrical trapezia: 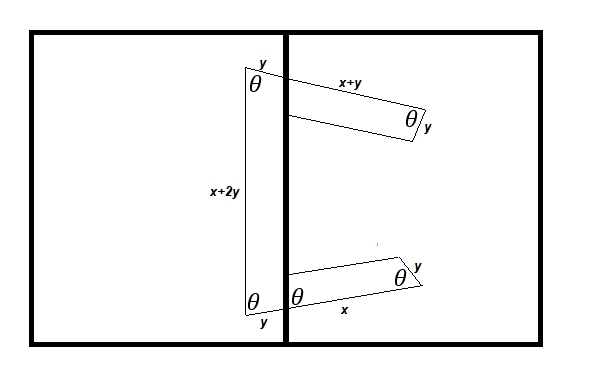 Then rearrange as follows: 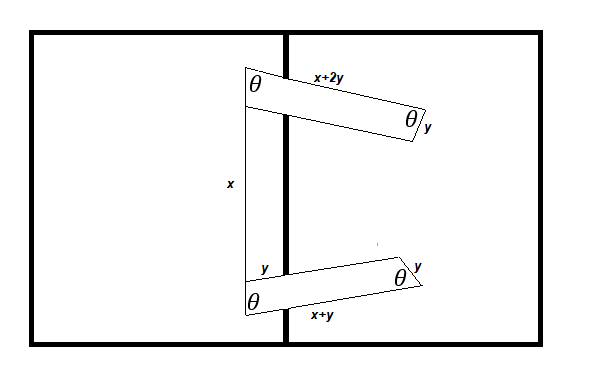 To see why this will work for any $\theta\in(60,90)$, consider the following diagram which shows the internal triangle formed by the dissection: 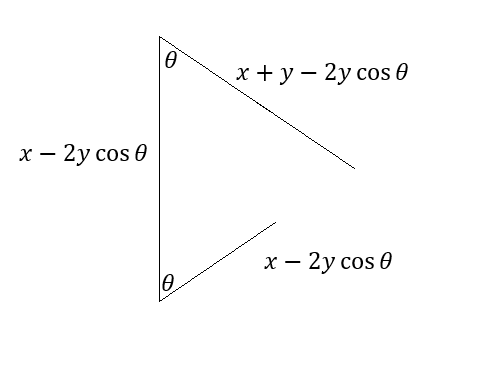 We now need to prove that we cannot do better.

The next step would be to get a solution in two pieces.

However, this is impossible. The following is a sketch of a proof:

Suppose I have performed a dissection, cutting out two pieces and rearranging them such that the two rectangles are locked together.

Then there must be at least a single piece (call it $A$) in the rearrangement which crosses the dividing line $MN$ (otherwise our two rectangles could be slid past each other vertically). Now consider this piece by itself and imagine we have the following construction: 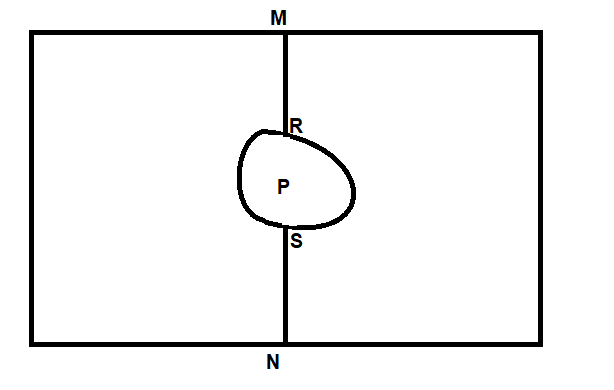 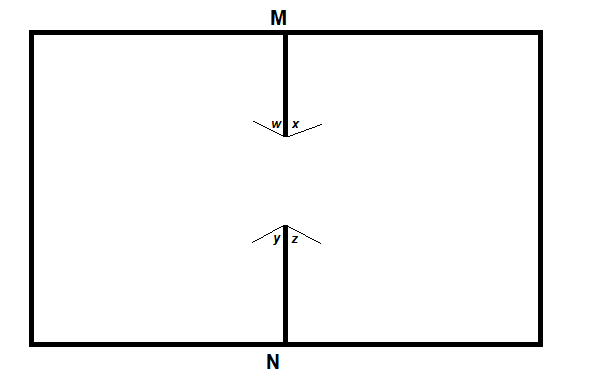 (Note that the left and right tangents about $R$ and $S$ need not be parallel, since $P$ may not be differentiable). Now suppose $w+x<180$, then we could construct a line as follows (arbitrarily close to the point $R$): 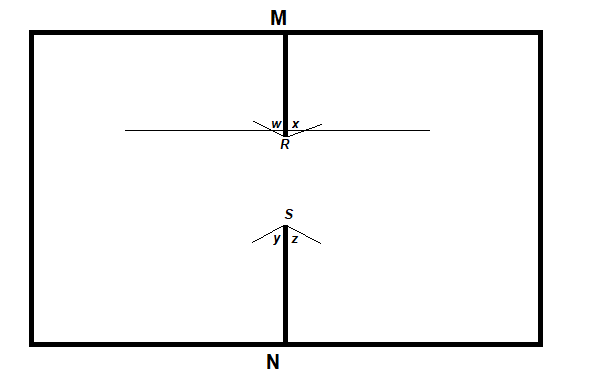 This line would be a straight line connecting two points in the shape $P$, but it would pass through the exterior of $P$. This would contradict convexity. Therefore $w+x\ge180$. By an identical argument, we can prove that $y+z\ge180$. 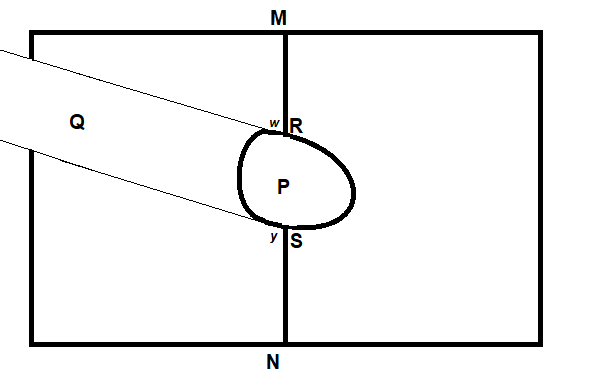 These tangents thus define a region $Q$ to the left of the line $MN$, which is either an infinite rectangle (if $w+y=180$), or a triangle (if $w+y>180$). The portion of $P$ that lies to the left of $MN$ must be wholly contained within $Q$. To see this, suppose without loss of generality that $P$ extends above $Q$. Then a line could be drawn through $R$ as follows: 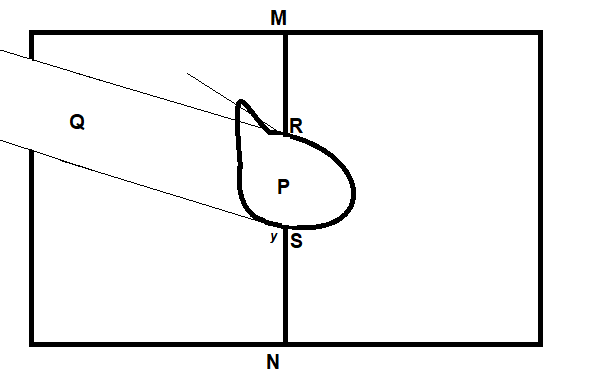 Which contradicts convexity of $P$.

Now my claim is that if we pull our left hand large rectangle in the direction shown by the following arrow, where the angle $u=\frac{w+y}{2}$, then it can be pulled away from $P$ and the right hand larger rectangle. 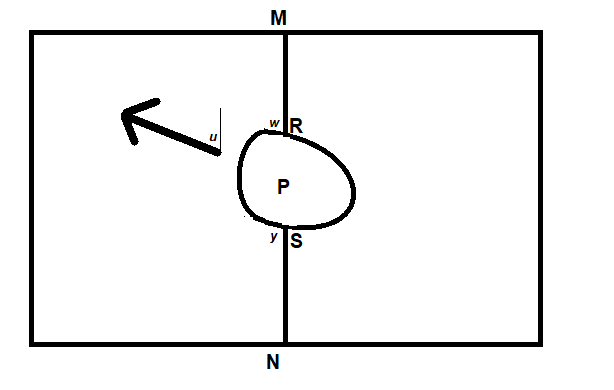 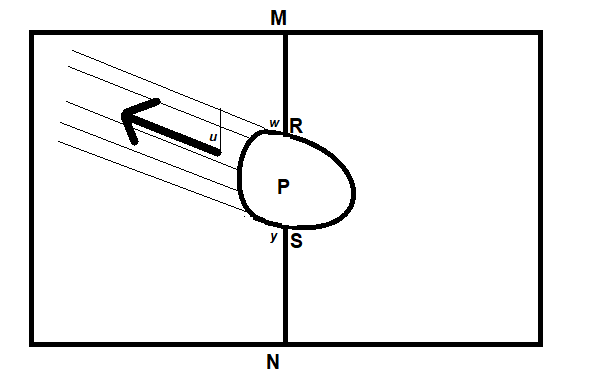 Now, let us return to our final dissection (with pieces rearranged to lock the squares together). If only one piece in this dissection crosses $MN$, then we have shown there is some angle $u$ at which the left rectangle can be pulled to detach it. Thus there must be at least a second piece (call it $O$) that crosses $MN$ in the final dissection. Let us look at these two pieces alone (ignoring all others): 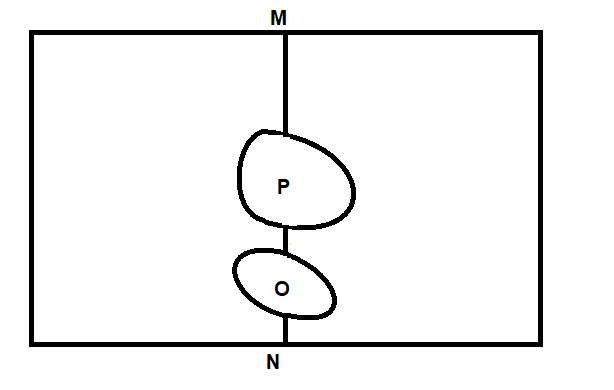 Now consider the cuts required to form these pieces. In making the initial cuts to form the slot that $P$ fits into, an area larger than $P$ may have been cut (to see why have a look at my example four-piece dissection, where $P$ corresponds to the piece $b$, which was formed as part of a larger rectangular cut). However, any cut that would generate the slot that $P$ fits into, must have crossed $MN$, and therefore have produced at least two different pieces (we label the parts that intersect $P$ as $P'$ and $P''$ - the actual pieces produced may have been larger). The same is true of $O$. 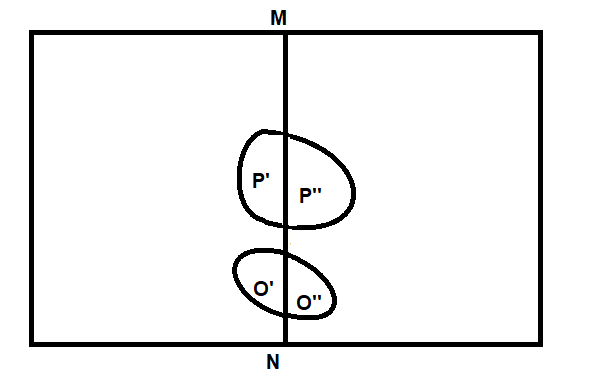 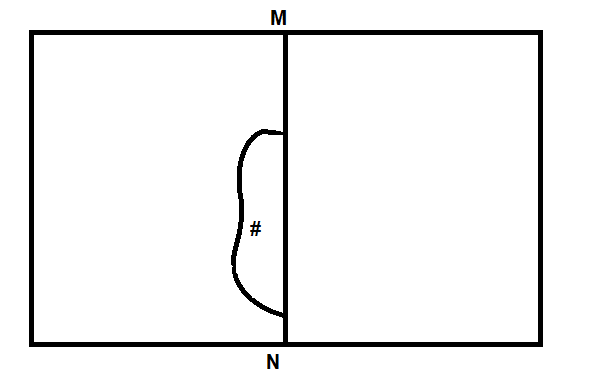 We can look at the angles produced by the tangents to $\#$: 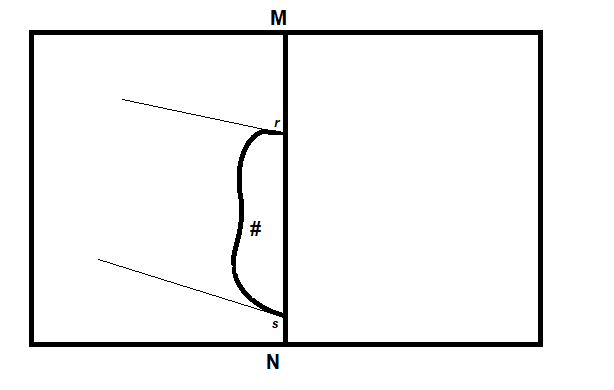 If $r+s\ge180$ then our argument from earlier shows that the left-hand rectangle can be pulled away in a certain direction. Therefore we must have $r+s<180$.

Now, let us rearrange our pieces. Since $\#$ was the only piece cut out of the left-hand rectangle, it is obvious that $P$ and $O$ (one of which must be identical with $\#$) must fit perfectly into the space formed when $\#$ is removed. Let us ignore what happens underneath the grey square: 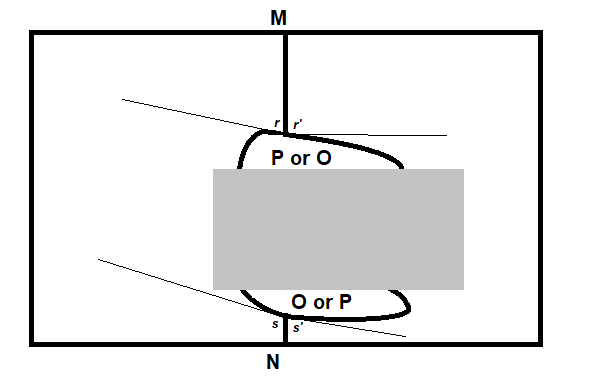 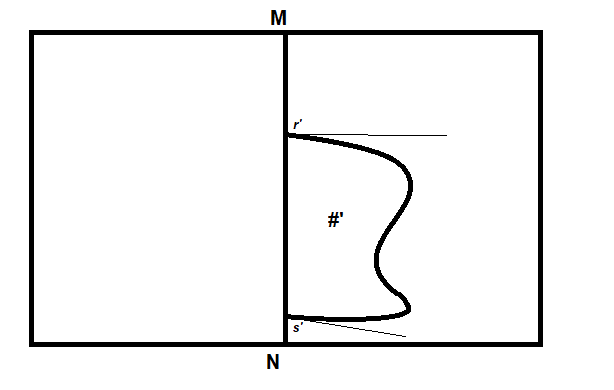 This is a contradiction. Thus it is impossible with two pieces.

Congratz to @Anon for finding the intended solution. I'm posting this just to show off a to scale picture I happened to have lying around: 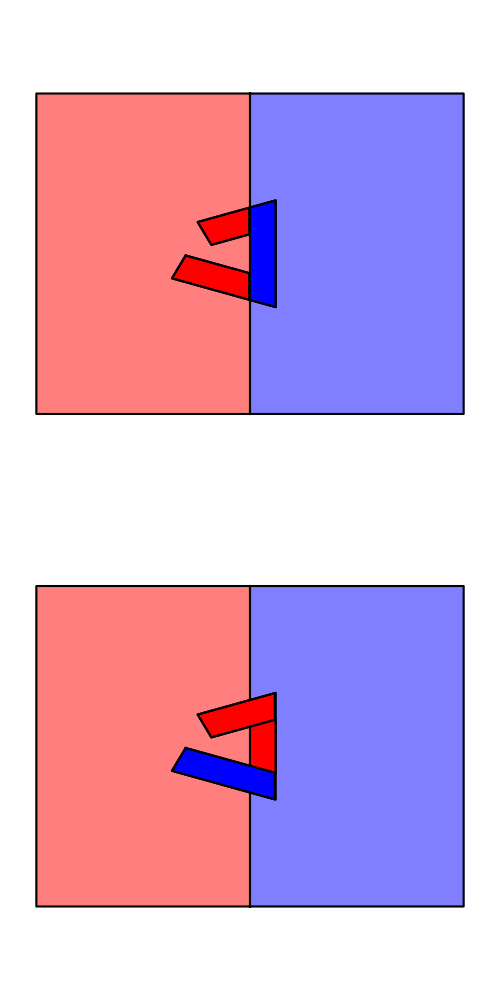 Not the answer you're looking for? Browse other questions tagged story geometry optimization dissection construction or ask your own question.