Train Tracks: is there a unique solution?

In the last year or so a puzzle has been appearing in 'The Guardian' (a UK newspaper). It looks like this: 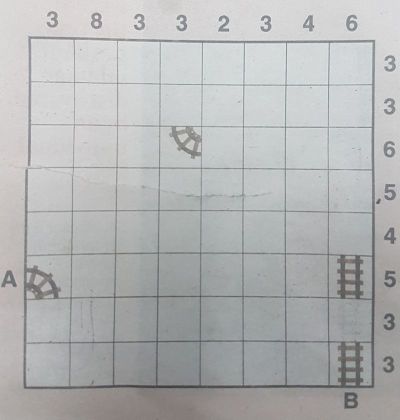 and the instructions are as follows:

Lay tracks to enable the train to travel from village A to village B. The numbers indicate how many sections of rail go in each row and column. There are only straight rails and curved rails. The track cannot cross itself.

I have been doing these puzzles for a while now and was wondering (a) if there was only one solution to a given puzzle, and (b) if the given cells - there are four in this example and that's usually the case - were actually necessary to solve the puzzle, or just made it easier: and if they were necessary, how many were required?

I have now written a program (using Microsoft C#) to generate and test these puzzles. Here's a sample track: 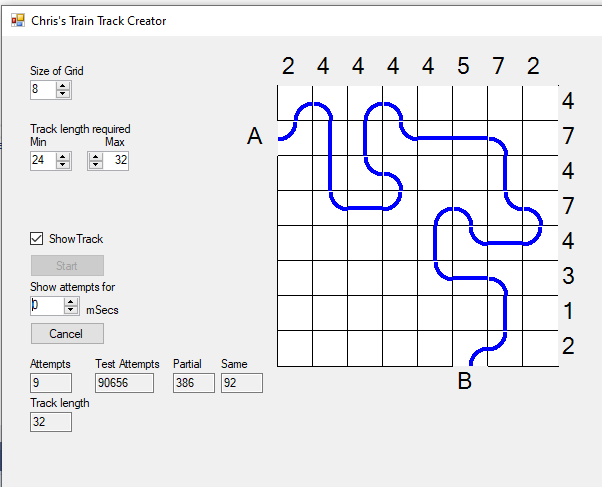 The program randomly chooses a left-hand-side entry point, then randomly chooses any of the allowed track segments until it finds a 'way out' on the lower side (most attempts will fail, and a new sequence will be tried - the number of attempts required for a solution is recorded in the 'Attempts' box).

I then went on to see if the program could generate another layout, using the same entry and exit points, and having the same row and column totals: 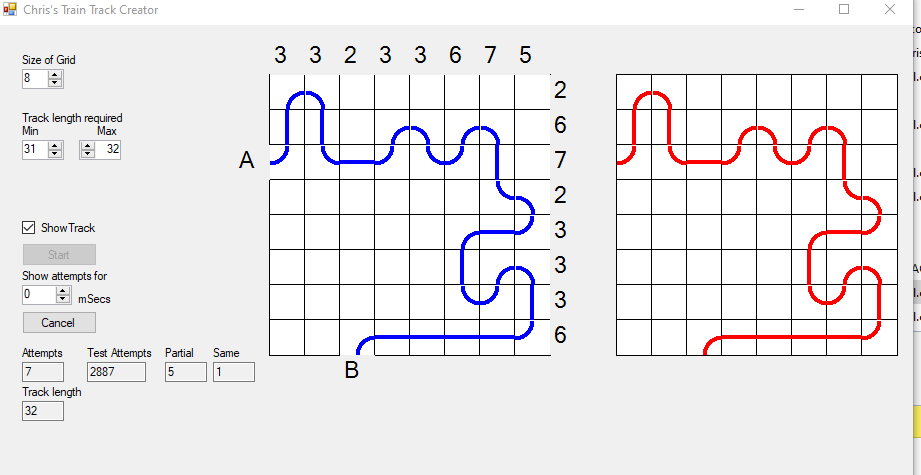 The surprise result is that, as far as I can see, there is a unique solution, even without any 'hint' (given) cells being defined. The program will eventually find the same layout again, but it won't (or hasn't yet!) found a different one. Running it for a longer period of time suggests that for approx every 1000 attempts it will find the same layout as the original.

In the puzzle you generated, there is

not a unique solution. You can mirror the 3x3 block of track that lies on rows 5-7 to get another solution: 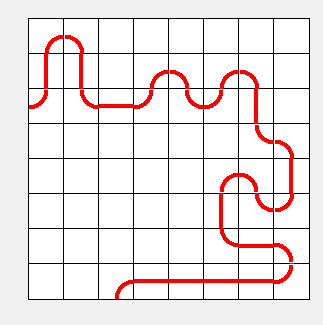 In fact, you can fill that 4x3 block in the bottom right corner in several different ways.

I could solve it up to the ambiguities with deductions only.

I think the hints are the result of the generation process. A random path is generated, a solver runs on this and random hints are added until the problem becomes unique. Maybe the entry and exit are always marked by a hint to make them more visible.

Besides, the hints add some variety to the type of deductions. And visually it looks better than an empty square. So they are nice to have.

PS: It's better with a picture. This is how far you go without hint. A dot means a track is required there. 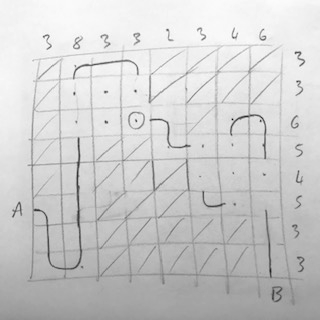 Just for the heads up, your first generated grid has another solution where some different squares are used or left empty: imgur.com/a/jEbRPmx

If there's a unique solution, you can take note of these:

- First of all, always extend the tracks to the middle of the next cell accordingly (obvious).

- The corner cells of the active (not guaranteed to be eliminated or filled/connected yet) part of the puzzle are important. Because they have only two adjacent cells, they must be empty if you can be sure that at least one of the adjacent cells is. Likewise, if an adjacent cell being empty creates a contradiction or lack of filled cells, the adjacent cell must be filled.

- If there is one unfilled cell left in a row or column at the edge of the unsolved part of the puzzle at some point, it must be adjacent to a filled segment (the rows/columns with the starting and ending points could be the exceptions).

- You can also try painting the grid like a checkerboard and check for both colors in rows and columns. Since the track is a continuous route, the total number of colored cells are equal or one color is seen on one more occasion than the other among all the filled cells.

My answer to the Guardian puzzle: