Rules of Double Back:

These two puzzles are the leftover of KPK 2021.

The first one is a standard Double Back puzzle. The second one is a variant with Little-Killer clues: Digits on the pointed diagonal show how many cells the loop bends on the corresponding diagonal. 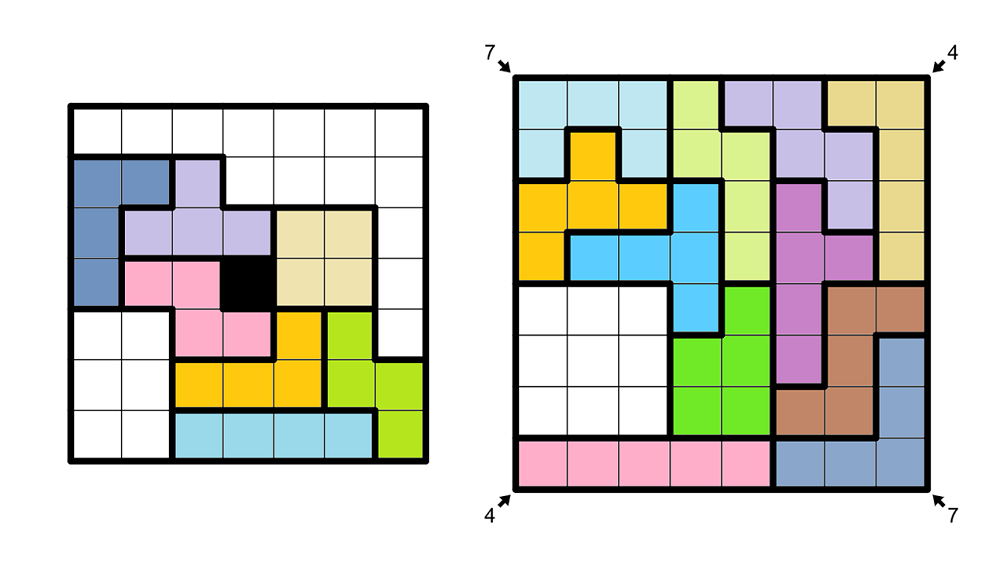 Corners are obvious starting points. If R3C3 connects to the south, the loop should go through the T three times. So we mark an X there. R4C3 is now a corner, connecting three cells of Z. The fourth cell (R5C4) cannot connect to the 3-cell cluster, so it connects to two L-cells.

R6C3 should connect to the east, since otherwise the 2nd fragment going through L would make a small loop. It leaves two ways for R7C4, deciding the two fragments of I and L.

Now going from the southeast corner, the entire board is easily completed in counterclockwise order.

Obvious corners, and use the T-junction logic to mark some X's. Also, two cells on the same branch of a T-junction are on the same fragment (i.e. connected).

If we connect R2C8 to the west, it would force R1C7 to the west too, making R1C5, R2C6, and R3C7 part of three different fragments on W. Therefore, R2C8 connects to the south instead. Now that L has a 4-cell fragment, the 5th cell (R4C8) forms a fragment on its own.

V on the bottom right has two choices too. If R6C8 is a 1-cell fragment, it connects to R5C8 and R6C7 of Z, dividing Z into three fragments. Therefore R6C8 is part of a 4-cell fragment. Now Z has three entry points, which can be fulfilled in only one way without breaking the loop.

P has an entry point in the center. If R5C5 connects to the new entry point, the remaining 3 cells of P should be connected together, but it conflicts with the bottom row. Thus P is divided into 1/4.

On the antidiagonal, R2C7 is a guaranteed bend, so only one more bend exists among R3C6, R5C4, R6C3, and R7C2. If R7C2 is a bend (going east) then R6C3 is also a bend. R6C3 cannot bend to the east because the remaining 3x3 region cannot form a single fragment. R6C2 cannot extend to the north because it would force two fragments of 3x3 which gives contradiction around R4C1.

Now we've got all four bends on the antidiagonal. Straightforward deduction gives this: