Remove the magic from a 3x3 Magic Square

It's commonly stated that there is only one solution to the 3x3 magic square. This is simply because every variant found is simply a rotation, reflection or both of any other variant. Once such variant is:

Now, your goal is to make it less interesting, albeit, in an interesting way. Your objective is simple, rearrange the magic square so that the digits can be read in sequence from $1$ to $9$ starting in the top left corner, to the bottom right corner:

However, be very careful on which tiles you swap as there are two important rules to swapping tiles:

Tiles can be swapped if they are adjacent to each other. Additionally, outside tiles are considered adjacent. Diagonal movements are not allowed. For example, the $8$ tile can be swapped with the $1$, $6$, $3$ and $4$ tiles initially.

Can you remove the magic from a 3x3 magic square?

Can we remove the magic?

This is the path I took to make a magic square into the grid:

We need to make it to:

How 5 is already correct. We don't want to touch it, so that's why the outside adjacent rule is here.

We need to get 1 into place, and it needs to be first because no matter what happens, 1 is going to get misplaced to a position where we can't place it back in one move. If I understand the rules, this is what will happen:

Note that the brackets mean how many moves are left 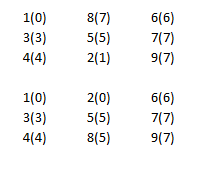 That helps out a ton, as the rest is pretty trivial: 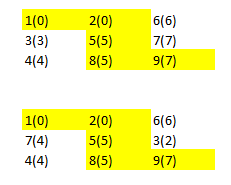 Aha! The 3 and 6 can now slip into place, both becoming into the right place.

We finish it off, making everything in the right place.

Well, say goodbye to the magic in the 3 by 3 magic square, and say hello to a normal 3 by 3 square!

As a supplementary answer I implemented a breadth-first search with duplicate suppression (so e.g. if a state is reachable by swapping A with B and then C with D, it only keeps one of the A<>B C<>D or C<>D A<>B paths), scored by the "total moves left" which monotonically decreases with each swap.

Assuming no errors this reveals that

There are two distinct solutions (which don't share any intermediate states). Both also do the 8 to 1 swap first as Stevo asserted was necessary.

The (hopefully self-explanatory) output from this is below. Source code at https://pastebin.com/5xXQtPMv could theoretically be trivially modified to provide an answer to the follow-on puzzle, but in practice needs to be much better optimised for lower memory usage.

8
Can you reactivate a 4x4 Magic Square?