Overall, gameplay is very similar to typical Scrabble; however, unlike typical Scrabble, you'll be using digits instead of letters (we'll cover your tile bag later). The objective is to achieve a higher score than your opponent while building prime numbers:

A prime number (or a prime) is a natural number greater than 1 that is not a product of two smaller natural numbers. For example, 5 is prime because the only ways of writing it as a product, 1 × 5 or 5 × 1, involve 5 itself.

For clarity, a number is considered valid, only if it is prime.

Numbers are awarded a base score represented as the sum of their tiles. For example, take the number $127$, assuming that none of the digits occupy a multiplying tile, the base score for the number is $1 + 2 + 7 = 10$.

Additionally, per traditional Scrabble rules, if all 7 of a player's tiles are played in a single turn, an additional 50 points are awarded.

As with traditional Scrabble, there are multiplier tiles on the board that impact the base score:

The tile bag is distributed based on Benford's law and contains 110 tiles:

As with traditional Scrabble, the game ends when:

Now, for the moment you've been waiting for! What is the highest achievable score in a single play? For your answer, you can assume that the board already contains a number that is advantageous to your goal with relation to your tile rack.

EDIT2: My solution was already accepted, but (I assumed) far from optimal. I finally made myself a prime checking algorithm and checked the 32 numbers that allow maximum scoring for the main 'word'.

No less than 5 are prime! So one can score the maximum of 136*27 for the main word alone (with 2 9s and an 8 on the triples for maximum secondary scoring) 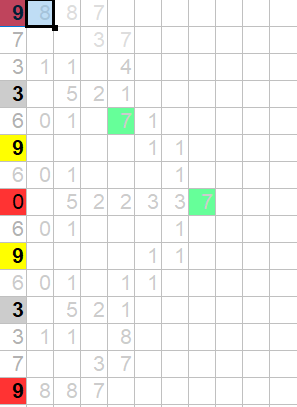 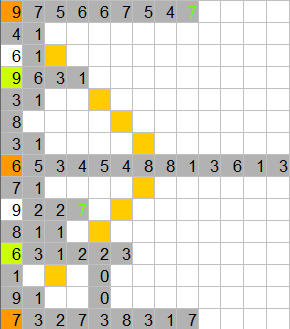 This is a huge question, and I think people can help each other here so I'm going to start with some initial strategy:

I'm attempting to build a 15 digit prime number with a high total digit sum. This prime will run along the edge of the board so that all 3 TN tiles can be hit at once. As such, this 15 digit prime would ideally have primes as substrings, because only 7 tiles can be played at once. There are no 15 digit Fibonacci numbers, and hitting all 3 TNs is more important than a 2x.

I have set up this board: 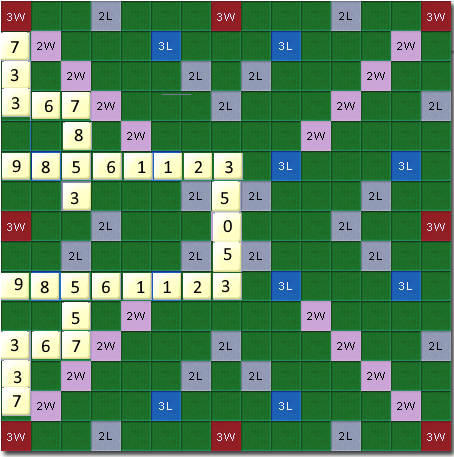 Note: One of the sixes in this set-up must be a blank.

Which allows for this move: 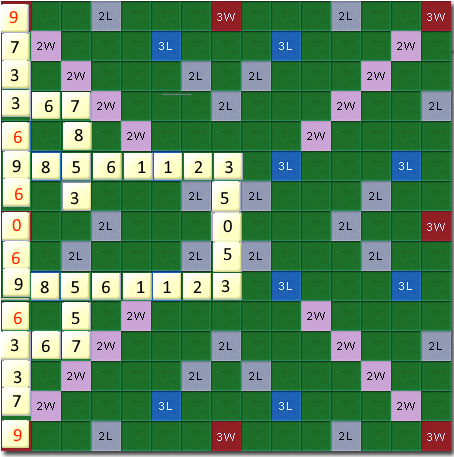 Not the answer you're looking for? Browse other questions tagged mathematics strategy number-property primes scrabble or ask your own question.

3
Find a high-scoring 53-digit prime number chain
15
For which numbers does the order of reversing their digits and squaring not matter?
4
Number wheel Challenge!
12
Can the score be deduced from the position in 2048?
1
5 subjects and their marks
26
Lowest total scrabble score
7
Make a formula to get the highest score
9
How many times can the “X” tile be used in one Scrabble game?
2
Looking for a strategy for assembling a Minesweeper grid knowing only the tiles but not their positions