It is known that most positive integers contain at least one copy of each of the ten digits.

First we need a way to count two things: the number of $n$-digit pandigital numbers and the number of pandigital numbers with a given prefix not using $r$ digits and a suffix of $f$ "free" digits. The count for the first is $$9\cdot9!S(n,10)$$ where $S(a,b)$ is the second-kind Stirling number, the number of ways to partition $a$ items into $b$ non-empty subsets (we multiply by $9$ for the leading digit choice and by $9!$ for the remaining digit choices). The count for the second is $$\sum_{k=r}^f\binom fkr!S(k,r)(10-r)^{f-k}$$ where $k$ represents the number of "free" digits reserved for non-prefix digits.

Given the two formulas above we can count the number of pandigital numbers $P(n)$ in $[1,n]$ by considering $n$'s prefixes decremented (so as not to overshoot $n$). Then define the non-pandigital abundance $a(n)=n-2P(n)$; it has the Lipschitz property of $|a(n+1)-a(n)|=1$ and we seek the last zero of $a(n)$. Writing code for $P(n)$ is a very delicate task; the code can be found here.

Knowing the Lipschitz property I first computed $a(n)$ for $n=d\cdot10^{26},1\le d\le10$ to get bounds for a zero, specifically the zero's first digit. Then I essentially performed $10$-fold multisection to get additional digits, until I saw all $10$ digits, at which point $a(n)$ was monotone in an interval, positive at the left end and negative at the right. The exact zero followed directly.

Here's a solution with incomplete logic (and could possibly be wrong).

The largest $n$ is

Now that we have a range where the largest $N$ lies, we can start to track down the exact value of the largest $n$. 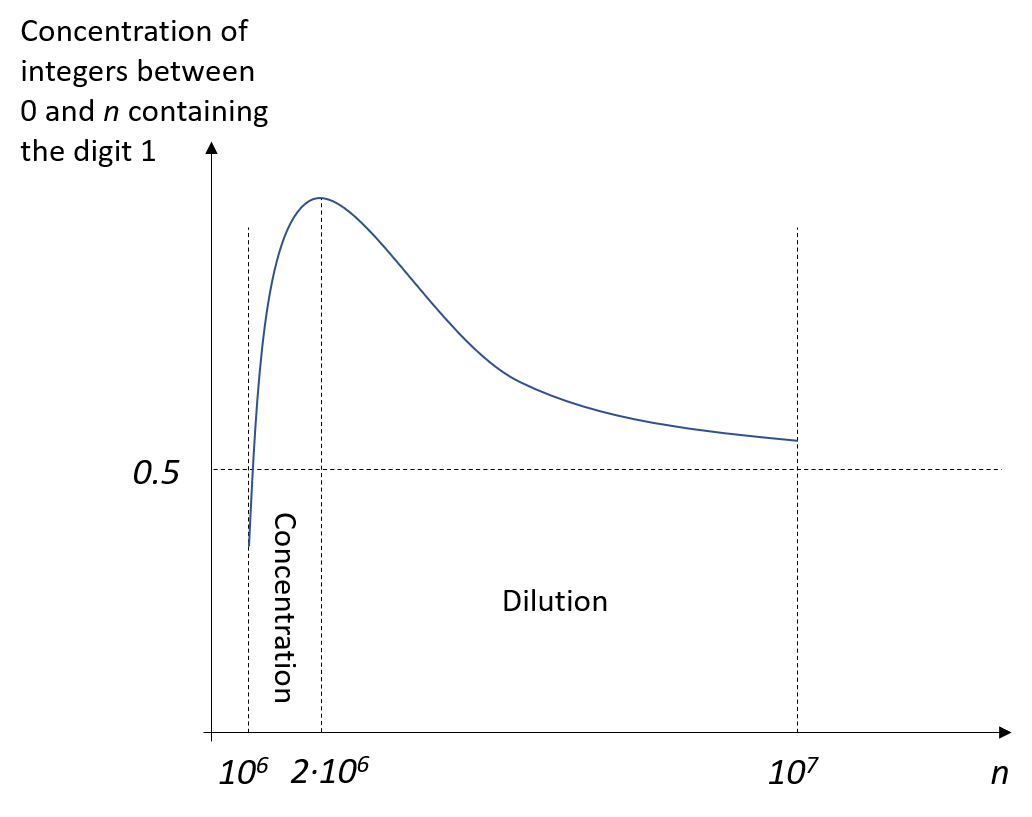 Now our objective is pretty clear: to find the point of intersection between the blue curve and the horizontal dotted line representing concentration $=0.5$.

Not the answer you're looking for? Browse other questions tagged mathematics combinatorics number-property or ask your own question.

3
Numbers with distinct digits
4
Circle of numbers
19
"Legally" filling a 10x10 table with 10 of each digit
12
Removing 100 digits from the first 100 numbers
7
A 4 x 4 Magic Square with Pairwise Relatively Prime Entries
2
Finding numbers having exactly two distinct digits
6
Seventeen positive integers
2
How many 𝑛-digit integers have the property that the block of its first 𝑘 digits is a prime or divisible by 𝑘 for all 1 ≤ 𝑘 ≤ 𝑛?