While space was being cleared for a new building, a bunch of scitales came out of the water to munch on the worker's lunches, before falling asleep in the way of everything. You, having a knack for puzzling scenarios, have been sent out to drive away the serpents with a basilisk-whistle. However, you realize that the scitales will only be driven deeper into the clearing site. Unless you make some paths

You could borrow a tractor from the worker in order to wear paths through the shrubbery. If one of the scitales awoke with a path by its head, it's certain to take the path instead. Then it should follow the path along, following any bends like in snake games and picking randomly at intersections. You aren't sure what'd happen at a dead end, so best avoid those. The workers have also mapped out where the snakes are sleeping (see below)

Scitales can generally move at around 1/4 of their length every second. They're also heavy sleepers. The only way to wake them up is all at once with your basilisk whistle

Because you've only got a rather mundane tractor to make the paths, it'll need to be in a continuous path from begining to end. But in the meantime it's rather versatile, being able to turn 90 degrees or reverse easily

There are already some preexisting paths. One leads into the water, and the other leads off into the worksite from the tractor's path. Luckily, the latter is already blocked off, so you don't need to worry about it

However, with all the panicked motion collisions could happen, either between snakes or with a snake hitting its own body. Either way, this is certain to cripple the snake, which would make it far more costly to move

Is there any way to make paths to ensure that the scitales never collide? If not, what is the lowest collision chance that can be managed? 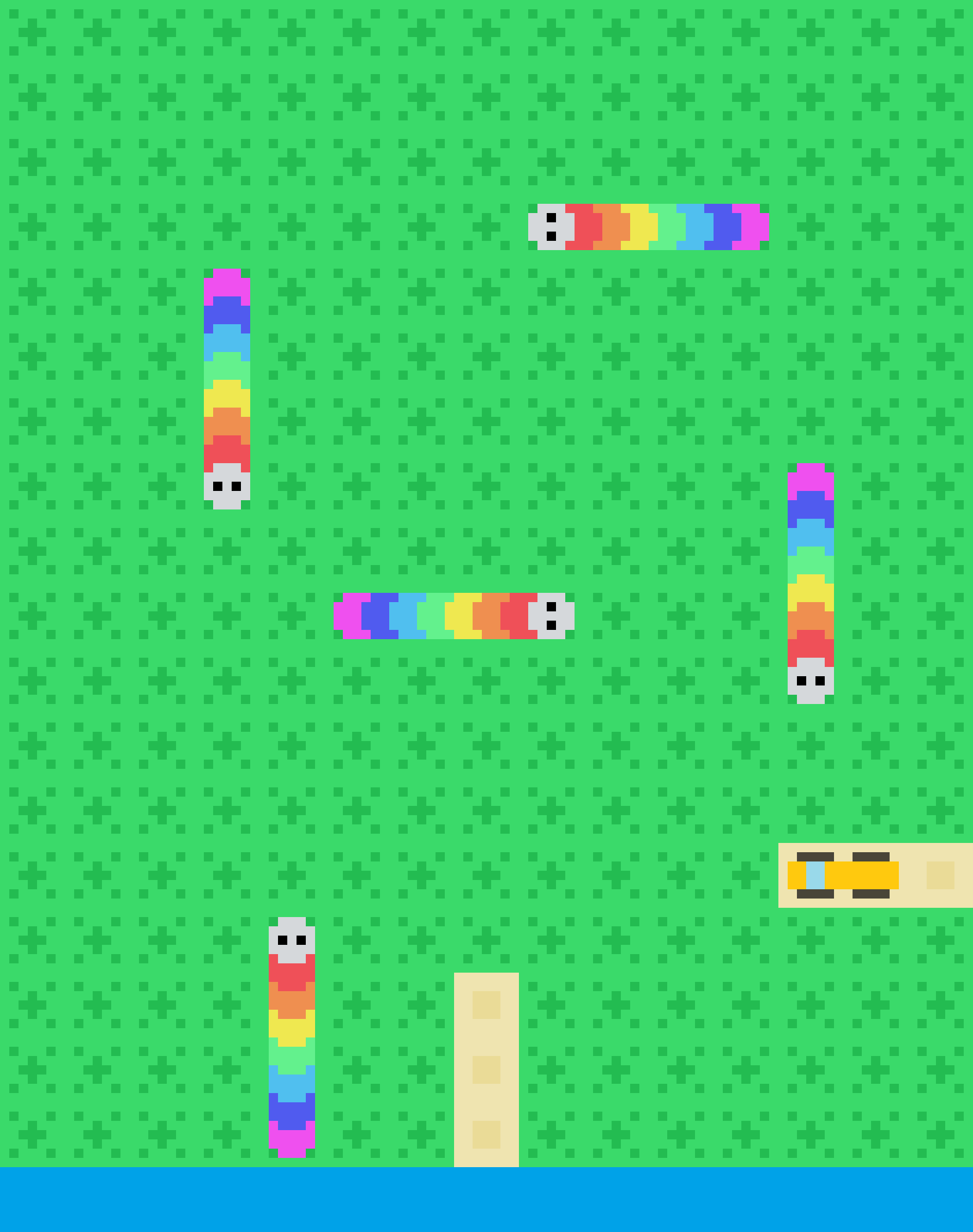 I don't have a rigorous justification for this, but it seems likely that any extra paths I make to let snakes avoid each other can also be used by scitales to seek each other out,

unless they lead to the water.

With that in mind, I

link all the scitale heads together in a giant loop, adding only branches that lead to the water to increase the chance of survival. We'll number them 1 through 5, starting from the bottom scitale and working clockwise around our loop. 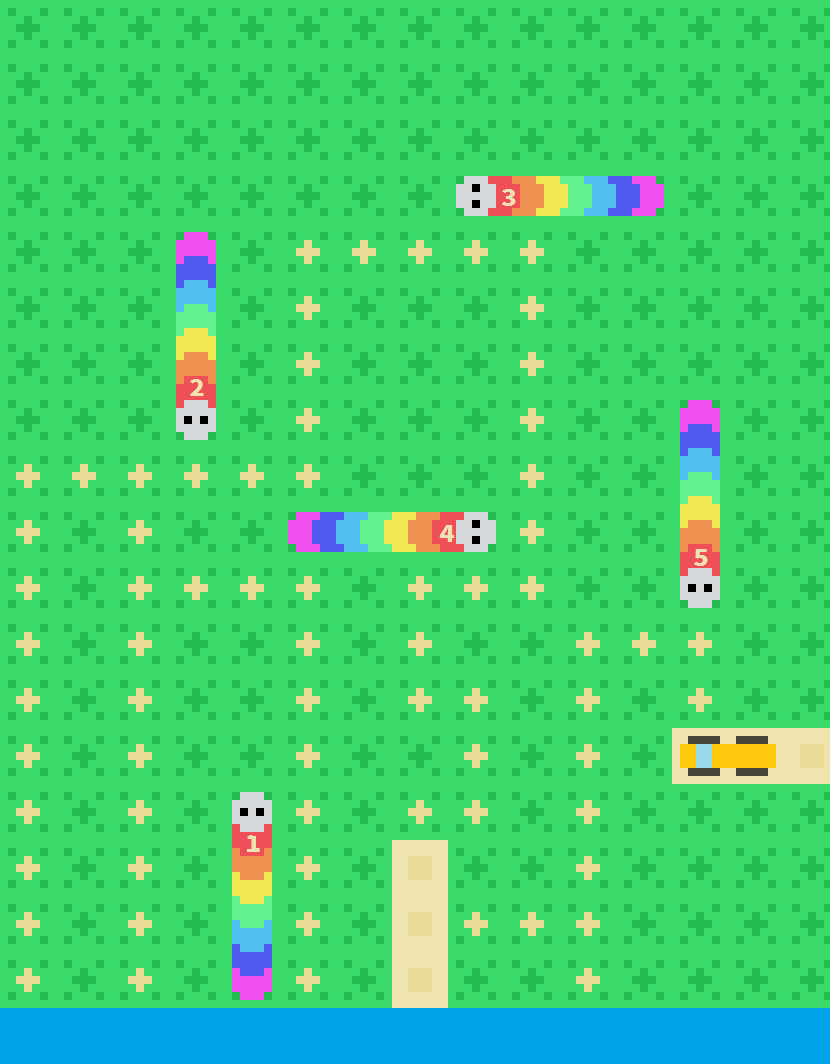 There are several cases to consider:

It's possible to drive the scitales into the water 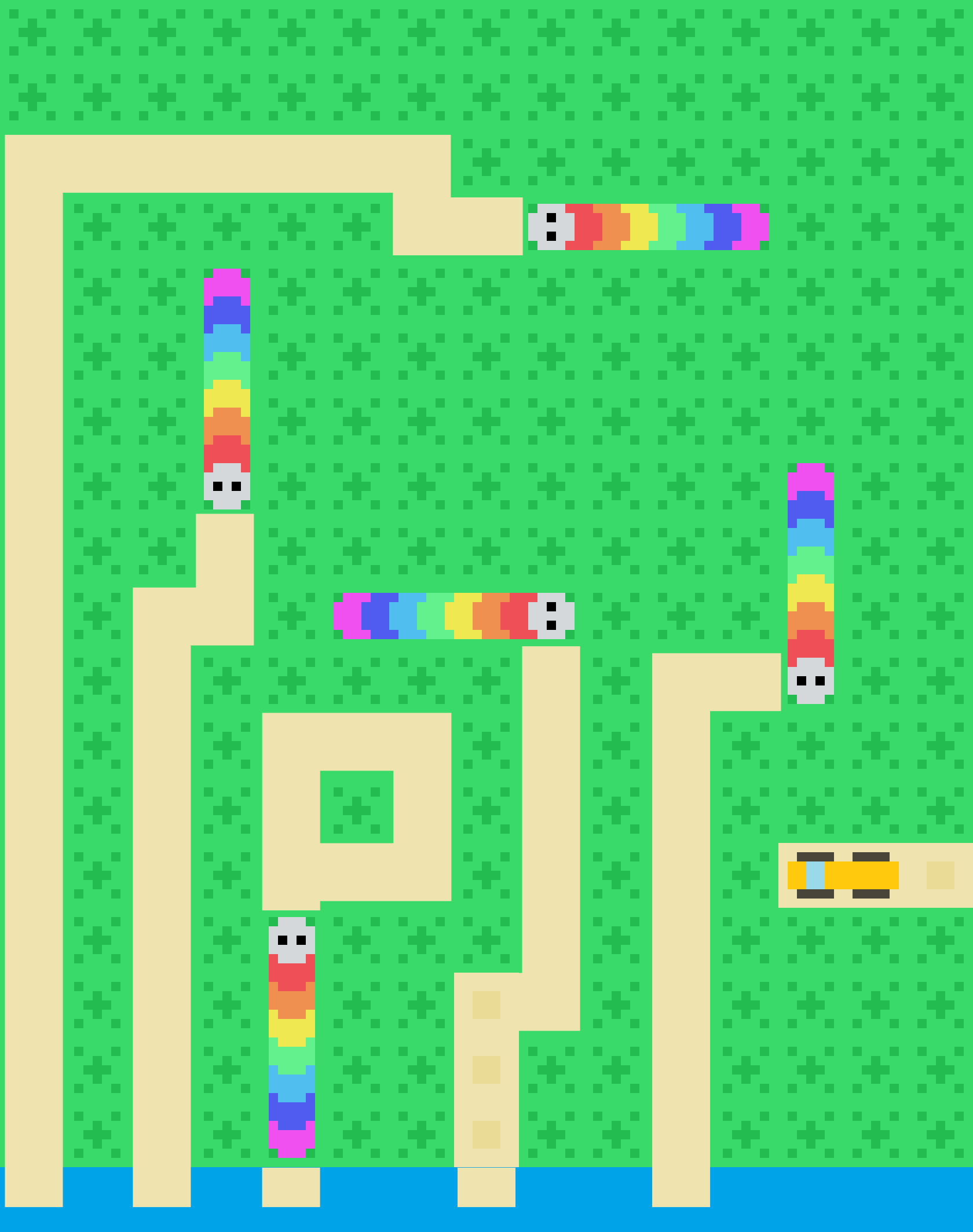 The middle scitale enters the cleared cycle of length 8; since all scitales have length 4 this scitale will not collide with itself. As time goes on, since a scitale chooses randomly at intersections, the probability of the middle scitale choosing the path into the water approaches 1 geometrically.

I had to make several assumptions:

Since we need a single path and we're not allowed dead ends, we need a plan. Collisions will always be possible, so we need to give the snakes every opportunity to choose life.

My first idea was to just:

Mow everywhere. This turns out not to be that great. The snakes just aren't that smart. My simulation gives about 25% probability of success.

My next idea was:

Mow an edge along the shoreline and give all the snakes a path to get there. Also, since we're not allowed dead ends, put a little 2x2 square at the end by its nose. That will give it enough space to turn around if it needs to. My view was that the details probably wouldn't matter much, so here's an example: 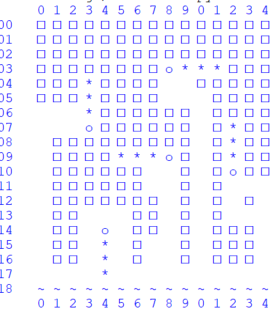 Which has a probability of success of around 85%. We'll call that a new lower-bound...

Not the answer you're looking for? Browse other questions tagged story strategy or ask your own question.

7
A fork in the road
12
Ernie and the Thrones of the Aqua-ant
8
Hired by the Council of Magic - Language Barrier at the Circle
32
Snakes on a Plane!! 2
7
Clearing the Robot Museum
10
Fight Battle 21
18
In Time or out of Time, that is the question
9
Luncheon in the dungeon
15
The Maze of Hermes