Extension to the coin flipping puzzle

This is an extension to this great puzzle: Coin Flipping Puzzle. The main difference is we now have ternary sequences instead of binary sequences.

The criminals are allowed to agree upon a common strategy in advance, but after that they cannot communicate. What is the best strategy for the prisoners that maximizes their chance of winning?

There is a simple strategy that is pretty good:

Find the first time a $1$ is thrown in your sequence, and choose the corresponding throw in the other player's sequence.

The probability of the two players skipping over the same number of non-$1$ outcomes is given by: $$ r = \frac13\cdot\frac13 + \frac23\cdot\frac23 \cdot r$$ where the first term represents both players throwing a $1$ and so not skipping, and the second term represents both players skipping a non-$1$ throw and then needing to skip the same number of further throws. This gives $r=\frac15$.

There is however a better strategy in which outcomes are grouped together in triplets.

I won't include the 24x24 table of all possible combinations, but it turns out that with this strategy, 294 of the 576 combinations result in a match.

While I haven't managed to beat @Jaap's result I think I gained some good intuition on the problem that is worth while sharing:

The centre piece of the advanced strategies we have seen is the following neat little trick:

Assume for the sake of argument that the events each player can see form a fixed recurrent sequence and only the phase is random. We could, equivalently, stipulate that they spin a wheel. Now let's further assume that the order of events for player A is upside down compared to the order of events for player B. Then they can win 100% by agreeing on a reference element a and both simply reporting the position of that element: 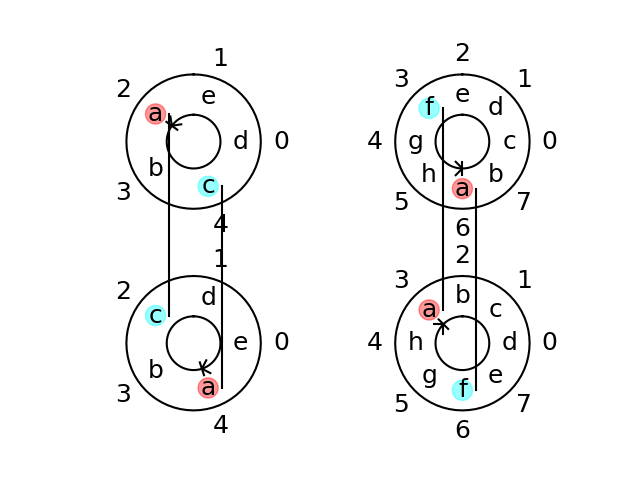 Two examples which should make the principle clear: Because of the opposite order of the patterns the difference in offsets simply cancels.

The advanced strategy @Jaap has described (for both the three way and the two way flips) can be viewed as transferring as much as possible of this simple scheme to the fully random situation: Choose a period (Jaap chose 3 with some success) get rid of monochromatic sequences, and group the remaining ones together if they are equal up to rotation. And now comes the tricky bit: Choose representatives for each class such that they are as similar as possible. This is necessary since after coordinating general strategies we have no means to communicate, so we need to settle for a single anchor point before we know which patterns we are going to work with.

Let's carry this out for the three letters three positions example. There are eight ($\frac{3^3-3} 3$) patterns up to rotation aligning them as best as we can they are (But keep in mind that one of the players needs to use the mirror image of this):

(If the frame length isn't a prime and there are therefore classes with different period lengths it becomes only very slightly more compliated.)

This formula offers a cheap method for brute force approaches, but also suggests some pretty successful heuristic strategies: The more uneven the distribution the better, ideally a single dominant letter per column: which translates to the simple but effective algorithm choose one reference pattern (a b c) and align everything else as closely as possible.

We can now also begin to understand why three seems to be a sweet spot. There clearly is a trade off between longer chain length which would allow us to cover as much of the probability space as possible in the first and most efficient iteration of the strategy and shorter patterns which are much easier to align.