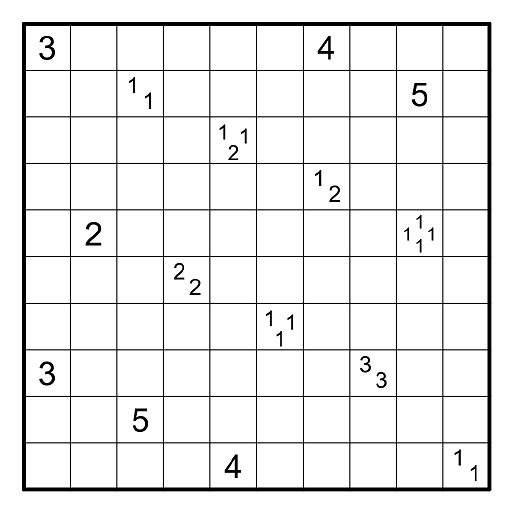 This is my first puzzle that I post in PSE. I hope you guys enjoy it! 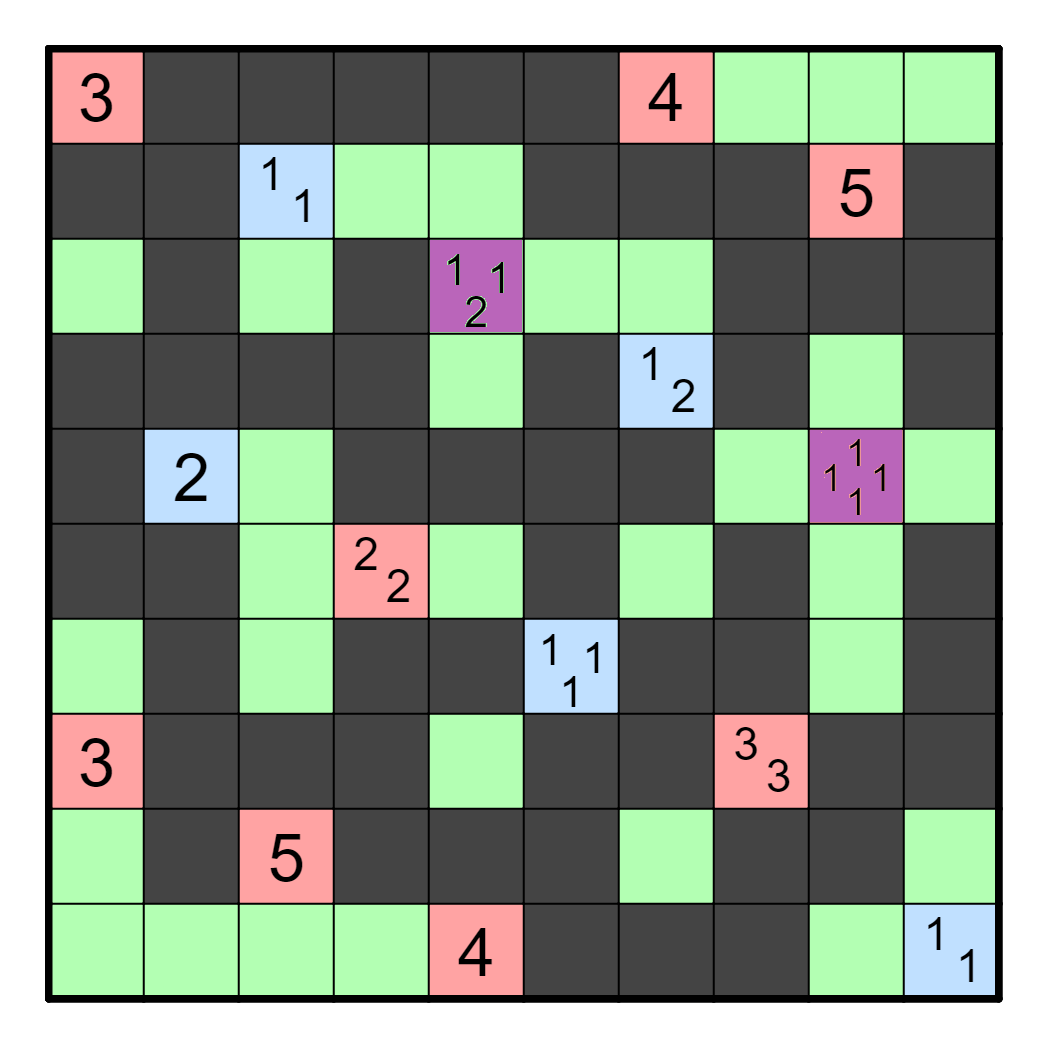 So the easiest place to start is with the 1-1-1-1 clue at right; it is the same pattern regardless of being a tapa/pata clue, and the square to its right cannot be shaded, since that would be isolated. So all of its diagonals are shaded, and we get some easy connectivity deductions, which show that the two squares diagonally beneath the 5 in the upper right corner are shaded. Regardless of whether this 5 is tapa/pata, the square beneath it must also be shaded. The grid thus far: 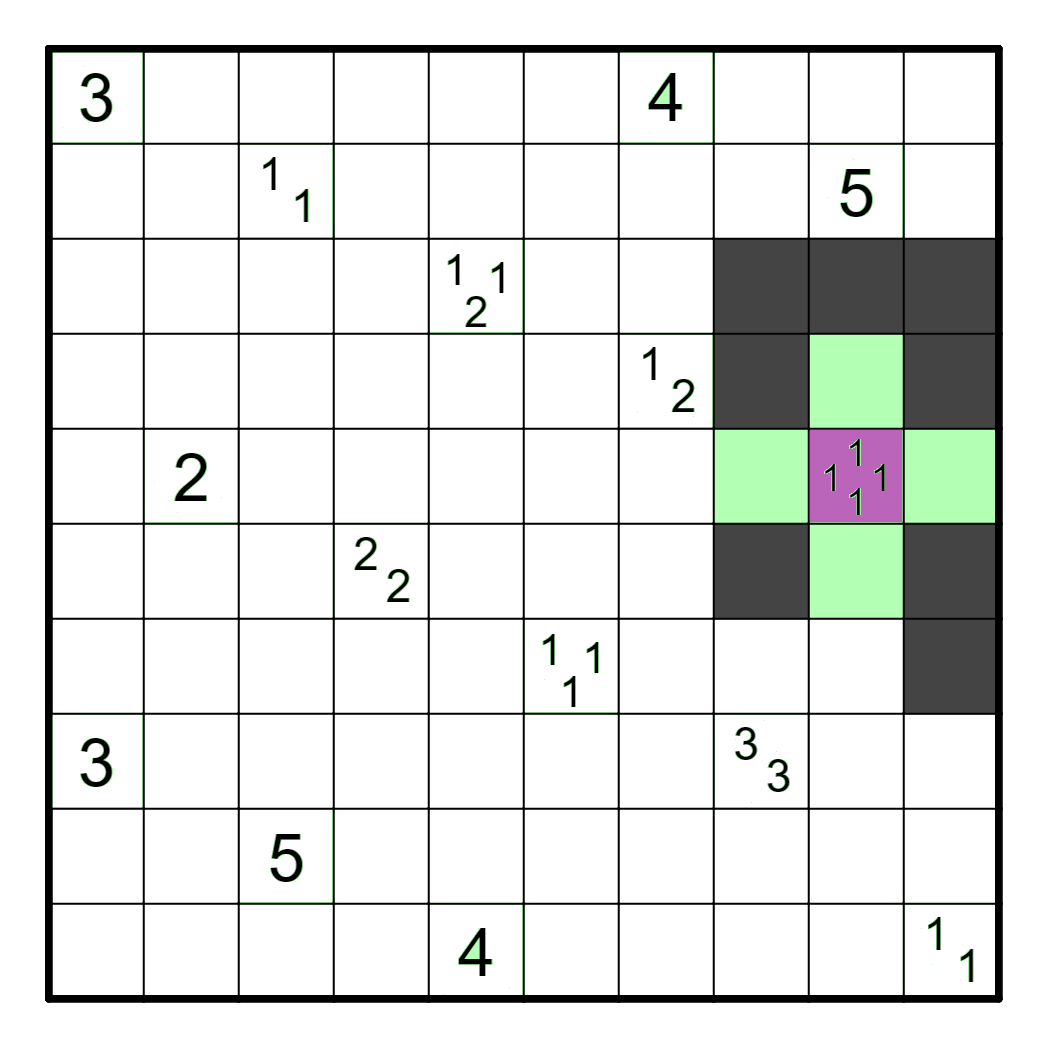 We claim the 3-3 clue at bottom right must be a tapa clue. If it is a pata clue, then at least one of R7C8 or R7C9 is unshaded, so the shaded squares in R6-7C10 must escape through R9C9. But if this square is shaded, then R10C10 is a pata clue, preventing this escape. So 3-3 must be a tapa clue. We can then shade the squares above and below, by the same escape logic as before. This forces the 1-1 in the bottom right corner to be a pata clue, as otherwise connecting R9C10 would create a 2x2 in R8-9C9-10. After some easy connectivity and non-2x2 deductions, leaving the squares left and right of the 3-3 unshaded would isolate the shaded squares in R6-7C19. Again, we get some simple connectivity shadings toward the 4 in R10C5, and connectivity forces this 4 to be a tapa clue, not pata. The grid thus far: 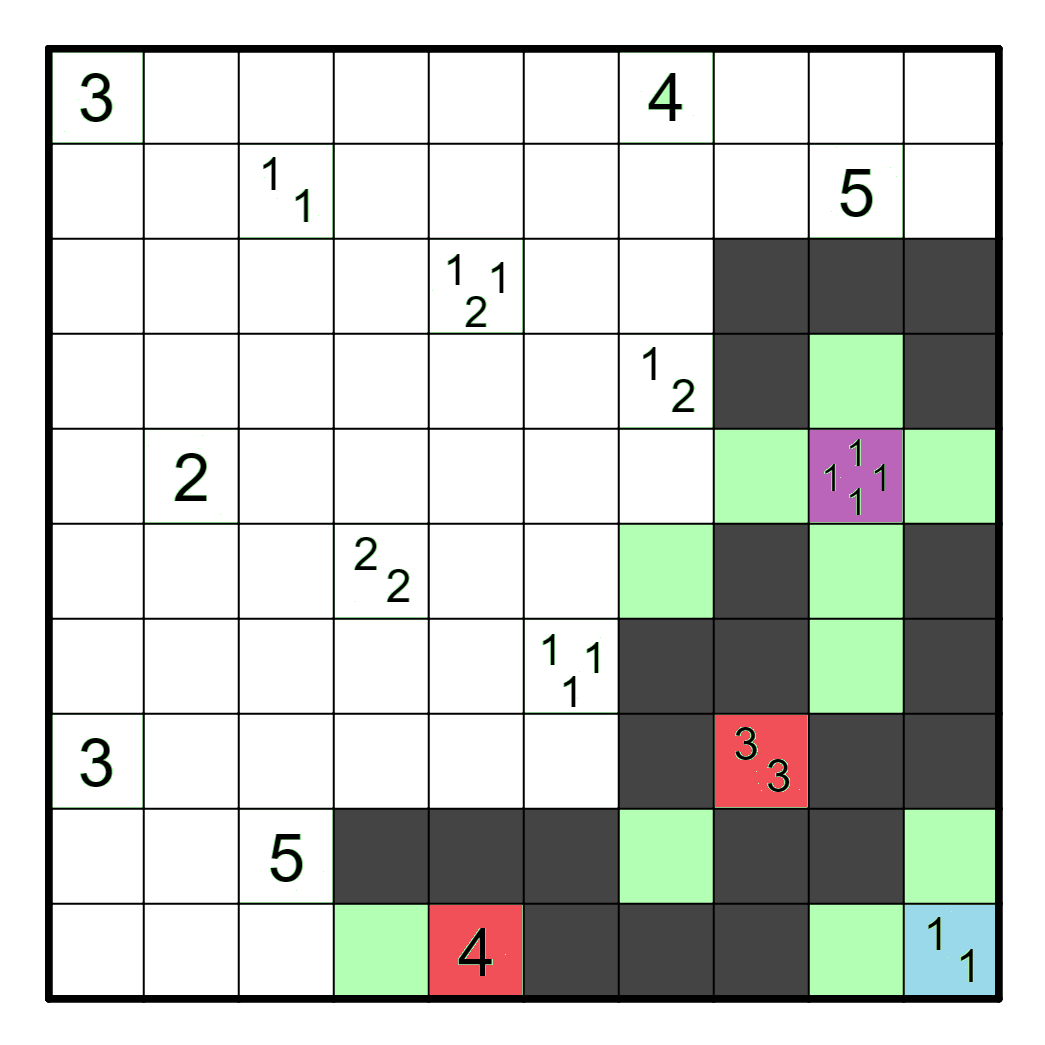 Continuing in the middle:

We have two consecutive shaded squares by the 1-1-1 in R7C6, so it must be a pata clue, connecting from the right gives one more shaded square, which forces the whole surrounding, and some extra squares for connectivity. This also lets us resolve the 5 in R9C3: if it were a pata clue, it quickly leads to a line of unshaded squares crossing the whole grid, breaking connectivity. We also get easy deduction with the 3 clue in R8C1. The grid thus far: 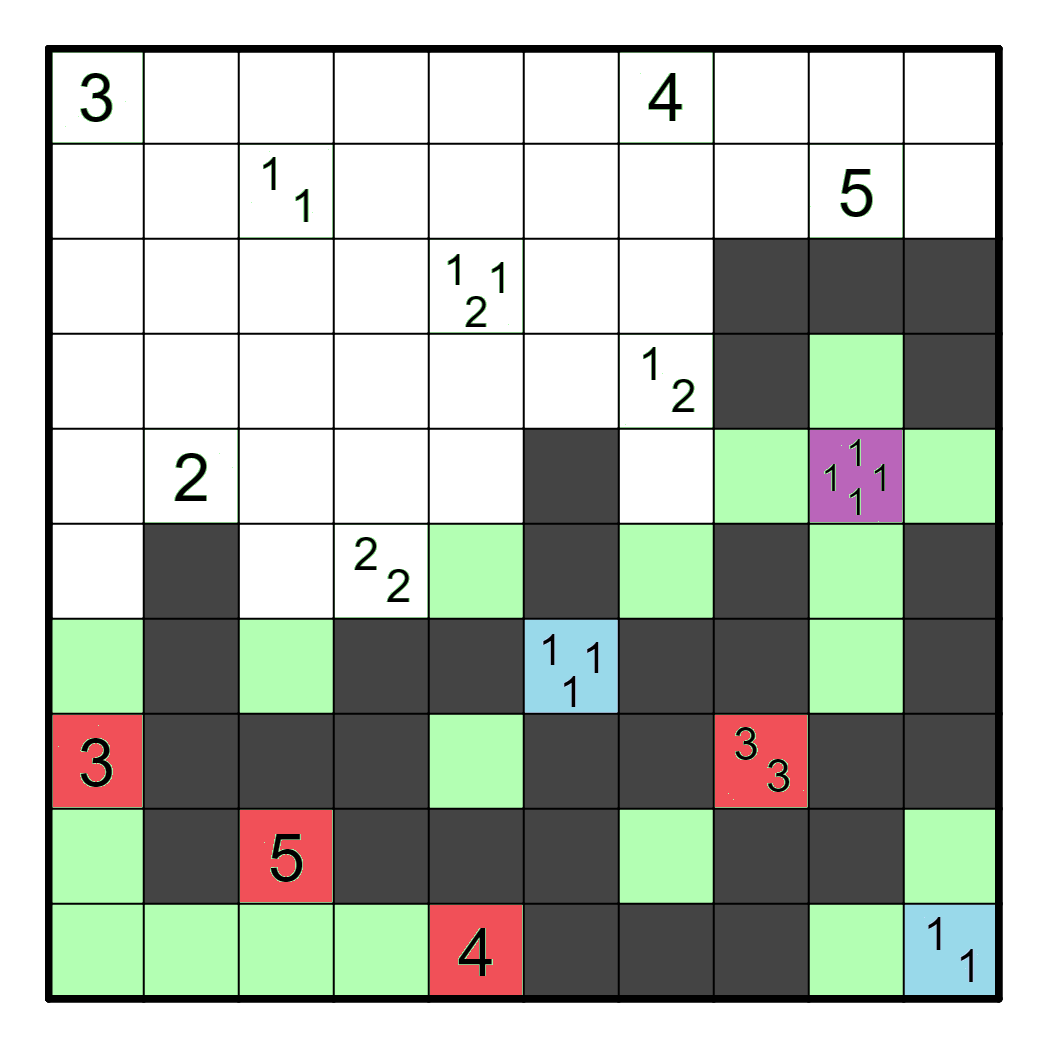 The 2 in R5C2 has to be a pata clue, for if not there would be at least one unshaded square to its left on the wall, and one unshaded square between the 2 and the 2-2, which would create an unshaded line from left-to-right, breaking connectivity. Then look at the 2-2: if it were a pata clue, then we would have to have R6C3 unshaded and R5C3 shaded, which contradicts the pata 2 clue. So the 2-2 is a tapa clue.

A bit of a contradiction: suppose the 1-2 in R4C7 is a tapa clue. Then we know all its shaded squares, and connectivity forces R5C5 to be shaded, which resolves the 2-2 and 2 clues at left. But then we are forced to shade R4C4, and thus not shade R4C5 for the 2x2 rule, which means the 1-1-2 clue in R3C5 cannot be satisfied as either a tapa or pata clue. The grid showing the contradiction (supposed unshaded in pink, supposed shaded in black): 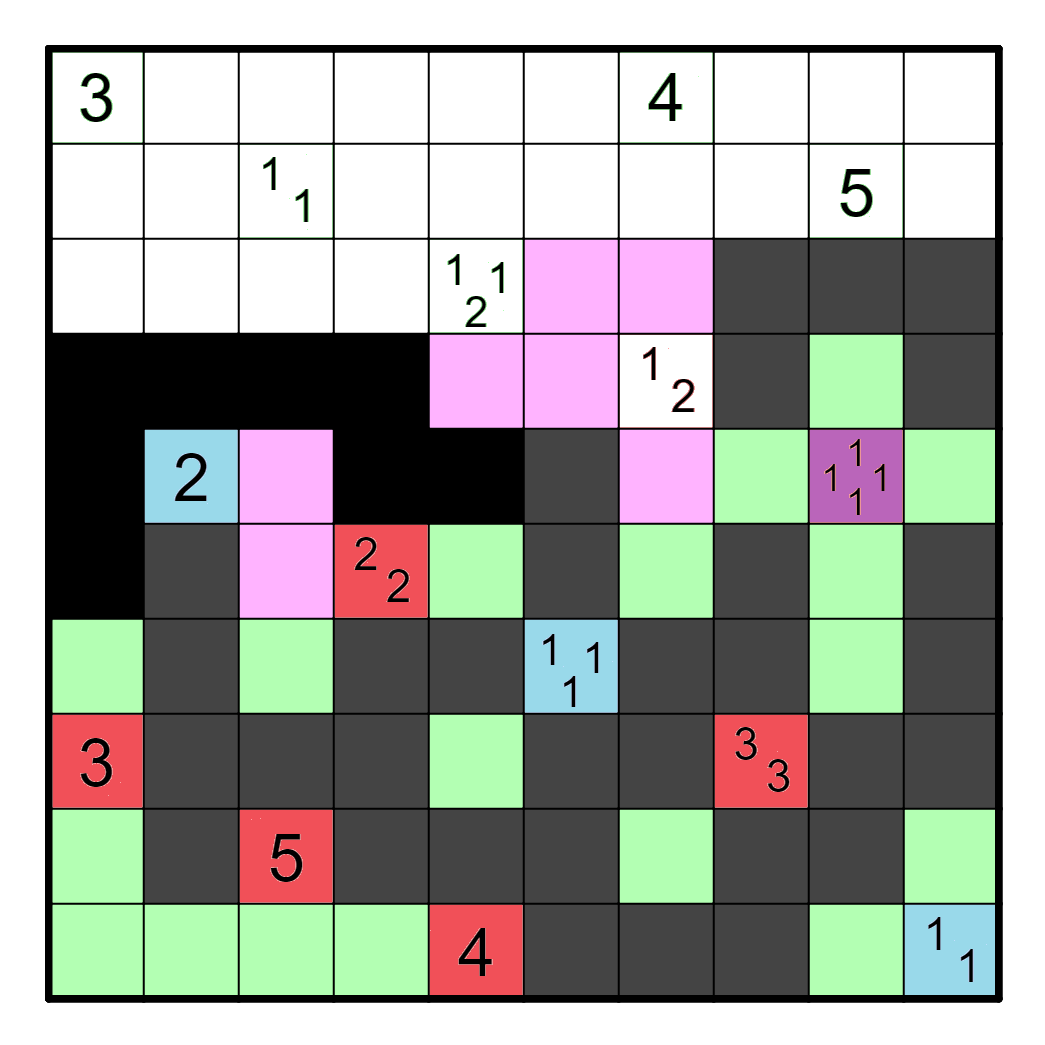 Let's look in the upper left:

Suppose the 3 in R1C1 is a pata clue, so that all of its squares are unshaded. This forces R2C3 to be a tapa clue, since it has two unshaded connected squares. Thus at least one of the squares R2-3C4 must be unshaded, which forces both of R3-4C6 to be shaded for connectivity. This completes the 1-2 clue, and forces connectivity to come across under the 4. But this leaves the 1-1-2 clue unable to be satisfied, yielding a contradiction. Thus 3-3 must be a tapa clue, which forces 1-1 to be a pata clue. The grid thus far: 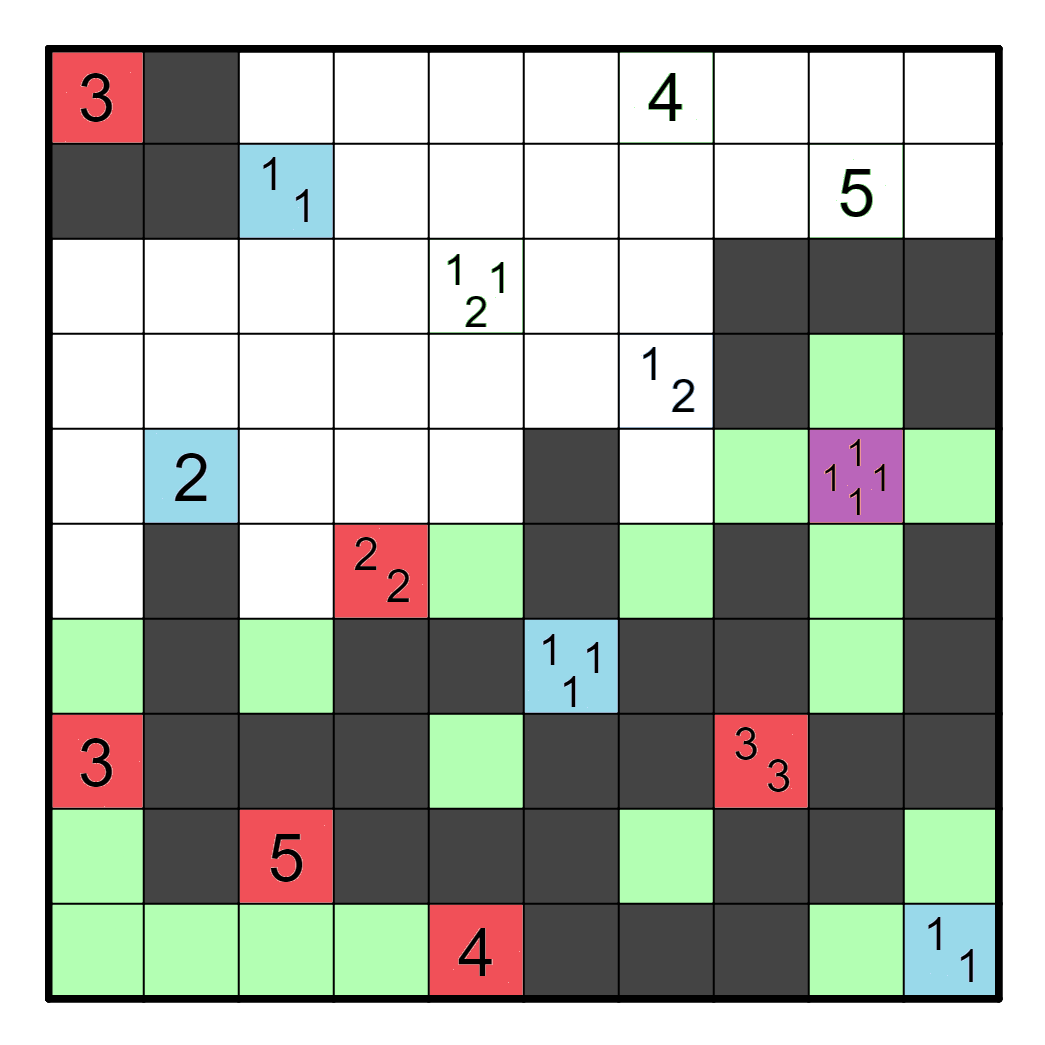 The shaded squares in the upper right have to escape between the 4 and the 1-2...but how? Let's suppose the 4 is a pata clue. Then we must have both R3C6 and R3C7 shaded, which forces the remaining squares around 1-2 to be unshaded. Connectivity now forces R2C5 and R2C6 to be shaded, which leaves the 1-1-2 unable to be satisfied. The contradiction (assumed shaded in black, assumed unshaded in pink): 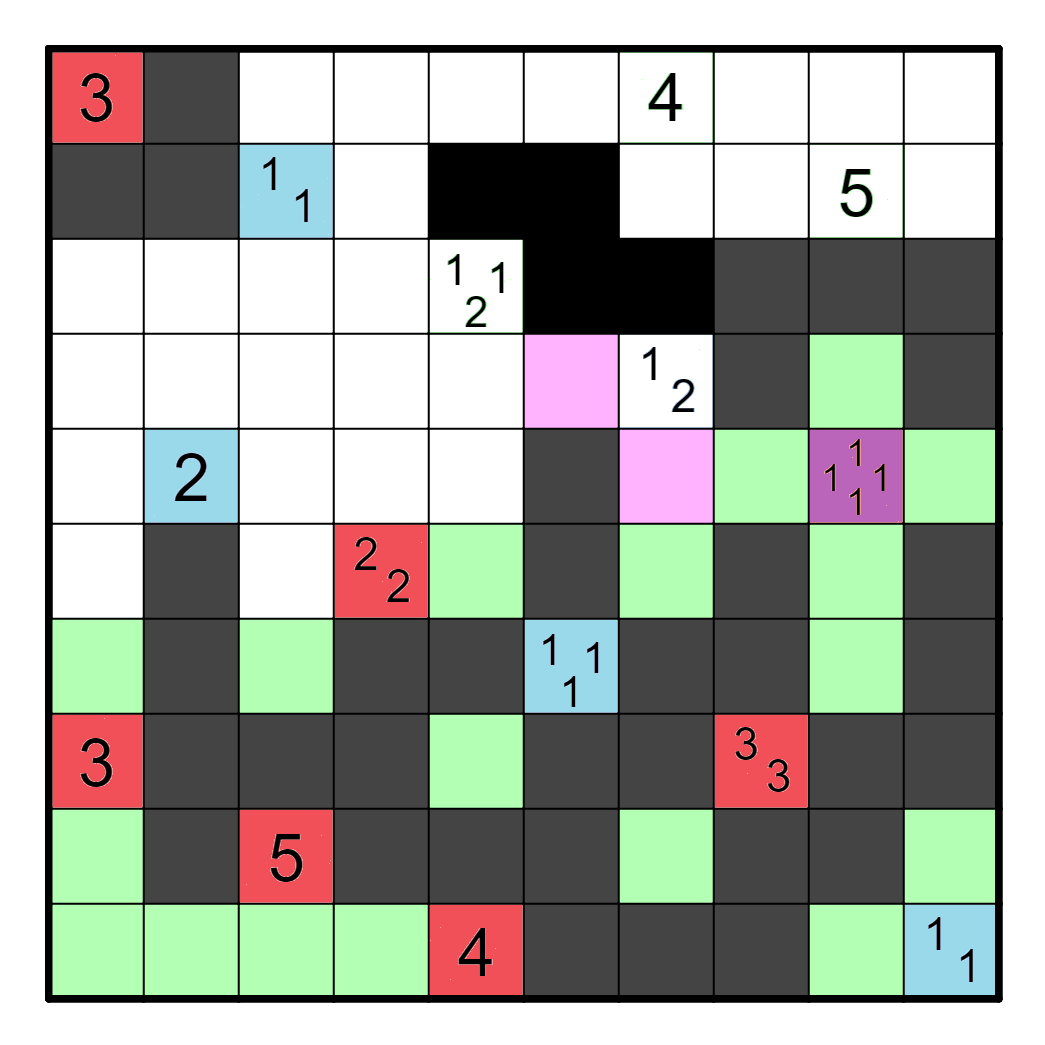 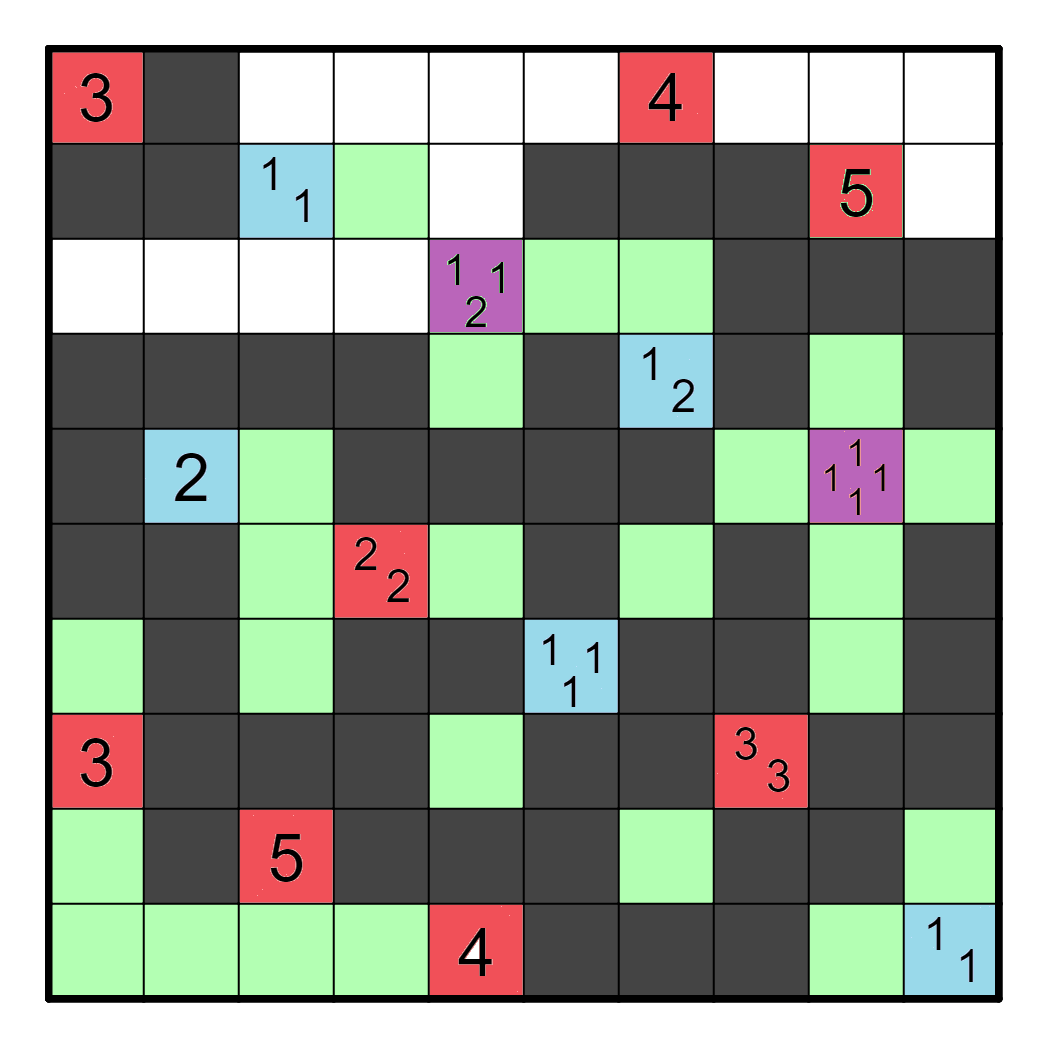 Notice that R2C4 had to be shaded to make the 1-1-2 work, but this is key, since the 1-1 pata clue then forces R1C4 and R3C4 to be shaded. At this point the rest of the grid resolves trivially.