Found an old IQ problem that came up in an earlier job search. Still don't know how to solve it. I tried counting the number of edges/ faces and flipping the diagrams, but I can't see the trick. 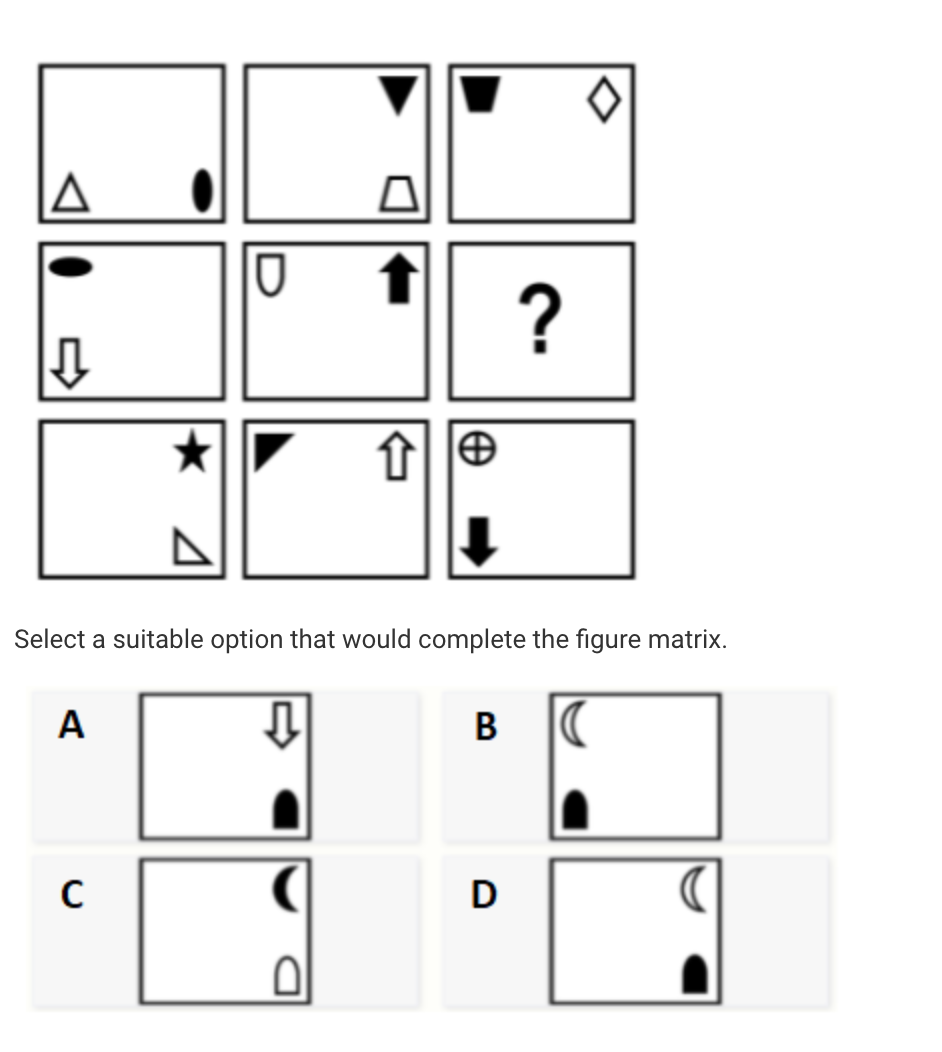 I'm going to propose the answer as:

The color scheme in each piece, within each row. The first row follows a pattern of white -> black. The second's pattern is black -> white, and the third's is white -> black.

Additionally, it can be seen that:

Within each row, a piece may alternate color, but outside of that, it's not repeated again. For example, the triangle in the first row is white then black, then not there. Same with the arrow in the third row.

This leads me to believe that all of the aforementioned points would remain true in the blank square, and as such our only logical options are:

With this, we can conclude that:

The answer is most likely to be D, since the arrow has already occurred twice in the row.

Note: I tried making sense with sides and lines, couldn't see anything significant there.

A short formulation, in line with ​the accepted answer

The white symbol reappears as black, mirrored horizontally, in the opposite corner. The black symbol is replaced with a new white symbol. Only D honors that.

For all of these questions, the real key is to look at the possible answers.

Many times, the testers have one real solution in mind with 3 fake solutions that are adjacent by one thing to the real one.

So, looking for majorities gives the following results:

3 times the moon is present, only 1 time not => moon has to be present

3 times the door is black, only 1 time white => door has to be black

That is enough to choose D, but if you look further you will see even more things that D has in common with the majority of answers.

I see no immediate logic in the symbols other than the color.

9
What is the sitting arrangement ?(double row question)
4
The gardener problem
1
Cheryl's birthday with one more dimension/person
9
Backwards Boggle
7
Find the ages of mathematician's children
3
How many children have two colored flags?
6
Skyscrapers 6x6 - Stuck at the end