Strategies for Circuit Board Puzzle from NYT

The New York Times publishes a collection of variety puzzles each week, and new to the rotation recently is one called "Circuit Board". Here is an example of a puzzle (I added coordinates for sake of discussion): 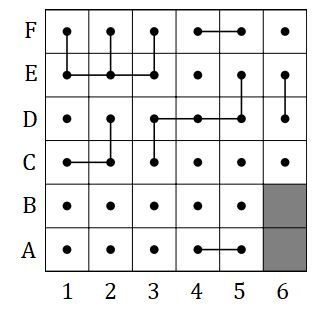 The puzzle is solved when "every point is connected to either one or three (never two) other points, and so that no areas are enclosed. When you’re done, all the points must be interconnected".

Beyond some basic observations, I am having trouble finding good strategies to be able to finish these puzzles. In the example, I have noted the following:

The problem I'm having is that it is hard to find specific connections that must be made. I can only find lots of instances where one of two connections must be made, for example:

I am looking for strategies that will help determine exactly where to put the connections.

In general, with logic puzzles it's important to mark not only the parts of the solution, but also things you know can't be part of the solution. Here, that means you should mark segments that you aren't allowed to draw, because there would be no way of completing the puzzle if you did.

For example, there can't be a connection between F1 and F2, because F1 is in a corner and already has one connection. So you could draw an X between them. 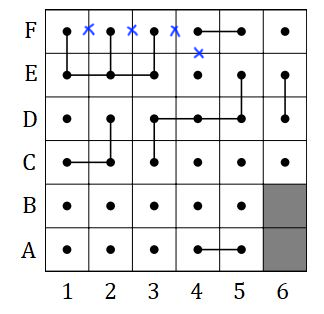 And now the top-right section is nearly isolated. How does the dot in F4 connect to the rest of the puzzle? It can't go through F6, because corners are always dead ends. So there must be a segment between F5 and E5.

X-markings could be useful in other places, too: Once you've drawn E1-D1, you know that D1 can't be a 3-connection dot, because that would make a tiny loop. So you can then mark off the other two D1 connections: 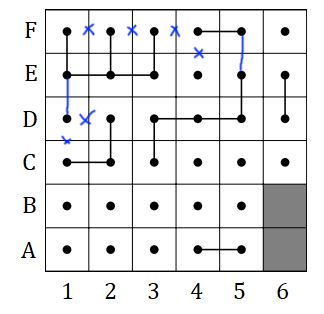 Continuing like this, marking both connections and Xs, should let you solve the puzzle much more easily.

Not the answer you're looking for? Browse other questions tagged logical-deduction grid-deduction strategy or ask your own question.