Mysterious Deaths, or is it just a well known attack?

Last week you were promoted to the position of Sergeant Head Detective of Australia, which basically means the best detective in Australia. Its January 2019, and you wake up ready for your new job.

But on your first day, you get a phone call from your best friend Sergeant Jack:

Sergeant Corrus Onavir, we have a death at 11 Vircor Avenue* Please come immediately and...

The phone was suddenly cut. Startled, you open the front door of your office and bolt down the stairs, and get to the scene as quickly as possible.

Once you get there, you see a teenaged boy, dead at his own house in his apartment. There was a name id, and you quickly glance at it. The name was Charlie Olthe, 19 years old.

That might be important you think, and you go look at everything else. Beside him was a clock stopped at 1am, a tissue, and a small squishy ball with tiny spikes coming out of it. No fingerprints, nothing on the body: It was a really weird death. Just as you were about to leave, you see a piece of paper that looks like it says BIN. No conclusions were to be found, but the case wasn't closed. You thought about it, and went back to your office.

The next day, Jack called you again. This time, they had already inVestigated the death and told him everything they knew:

A clock that stopped at 9am, the exact same squishy ball, again nothing on the site on the body, and the name was Victoria Ivey, and she was only 11 years old. Again, there was another piece of paper that he said looked like an AR. You thought about it, but still nothing came to your mind. Aghast, you went back to your office for 2 hours, before you were called again at 1pm to another death scene.

Once you arrived to the scene, you saw that everything that happened in the last 2 deaths were there. They must be connected somehow you thought, as you saw the squishy ball with spikes, the clock that stopped at 1pm, the piece of paper that said Y, and the name id, except only his first name was seen. It was David. You thought about it, still not knowing what was happening. But then, on the edge of peripheral vision, you saw a 2 pieces of paper dangling in the air. You go and investigate.

You want to know who killed them? Heres' a Nurikabe puzzle answer... wait parts are erased! White is bigger than Black... Solve it if you can! 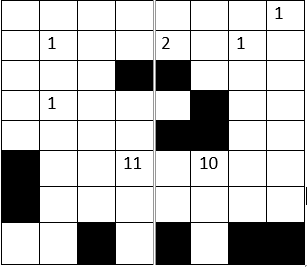 After solving the puzzle, some suspects were sent to your office. You dismiss all of them, saying that they aren't the murderers. You go out of your office, and start telling everyone to be careful.

This puzzle is a reference to the

The name "Corrus Onavir" can be rearranged as COR[ONAVIR]RUS, with an extra R. >! Similarly, the location "Vircor Avenue" is two of the syllables from the word "coronavirus".

The "squishy ball with spikes coming out" is a common way of depicting the coronavirus.
The names' initials spell out C.O., V.I., D.

The Nurikabe has multiple solutions, and I'm not sure how it's relevant: 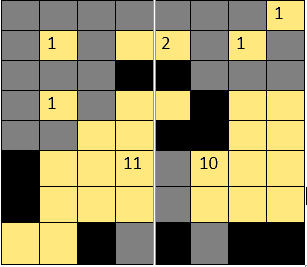 (In the 11 region, you can shade R5C3 or R7C3; you could also connect the given black cell the other way.)

The "pieces of paper" spell BINARY, but the rows and columns don't read as meaningful ASCII, with either assignment of 0/1.

9
Recover the Ripped Quote
214
An overheard gang meeting, a double agent, and a murder
8
A Letter: Moriarty is dead
4
What is my colleague researching?
22
My wall clock is not working
14
What is his full name?
12
A Boring Lecture - ft. Eggs, Donuts & Pills
16
Ingrid Deduction pops by with a puzzle