How long can you survive at the devil's playground?

The devil has trapped you in his playground. 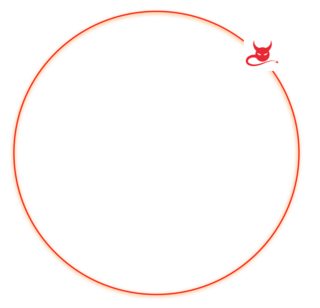 The devil knows that you can't cross over the burning boundary of his circle, so he allows you to choose a position within the circle before he starts to chase you down. You know that 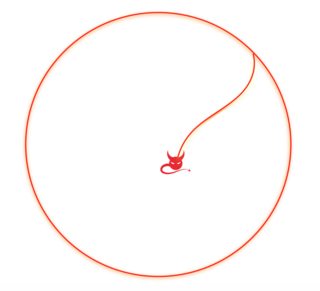 You're caught by the devil if the distance between you is $0$. The devil will try to catch you as quickly as possible. You know that an angel is en route to save you, so you move to survive for as long as possible.

Question 1: How long can you manage to survive if $V=1$? How should you move?

Question 2: Suppose now you move twice as fast as the devil, i.e. $V=2$. How long can you manage to survive?

Question 3: As your speed $V$ approaches infinity, how long can you manage to survive?

Notice that you can survive for at least $T=2$ by choosing to stay at the opposite side of the devil. On the other hand, you can't survive indefinitely no matter how fast you move, because the devil can carve the disk into patches of exponentially decreasing areas with you inside, shrinking that area to $0$ in finite time.

You're screwed in constant time, no matter your speed, since the devil has a good strategy.

I cannot claim to having found the devil's optimal strategy, but I do claim that there is an upper bound to the time the devil takes to catch the victim. And that upper bound is quite low.

Assume that the circle is inscribed in an equilateral triangle of ABC of base $b = 2\sqrt[]3$, with the devil resting at the midpoint D of its base AB, like so: 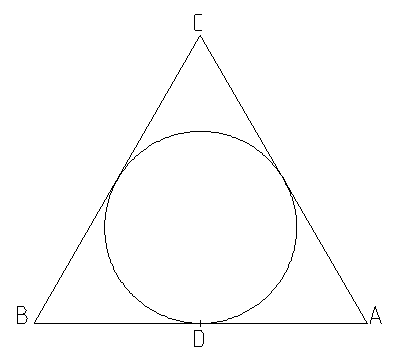 In fact, forget about the circle. Also, mark the midpoint of BC as E, and of CA as F: 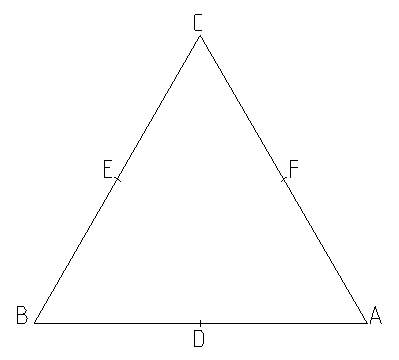 The devil shall move a distance of $b/2$ from D towards E, dividing it in two areas. Mark the midpoint of DE as G: 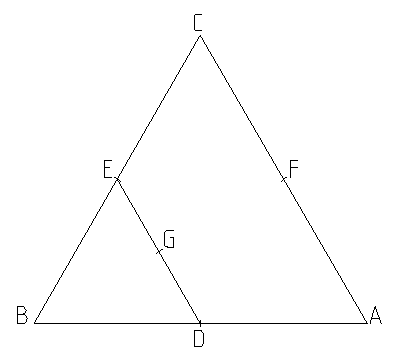 Is the victim within the smaller triangle BDE? Good, move $b/4$ towards G, and repeat this division algorithm on the BDE triangle. If not, move $b/2$ from E to F, marking the midpoint of EF as H: 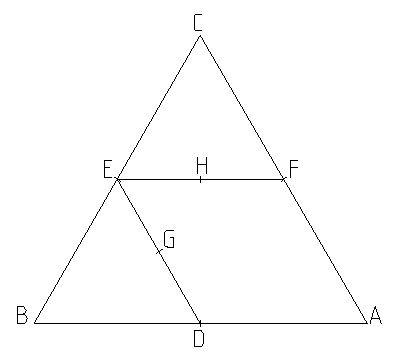 Again: is the victim in the smaller triangle CEF? Good, then move $b/4$ back to H and repeat. If not, divide the remaining rhombus in two by moving $b/2$ from F to D, marking the midpoint of DF as J: 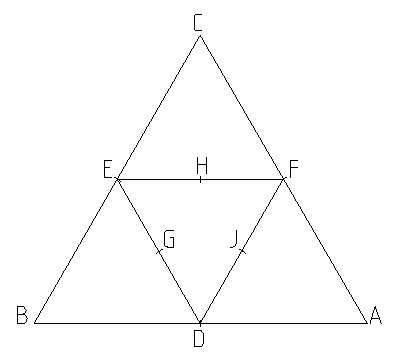 ...and since the victim sure is either DEF or ADF, move $b/4$ from D to J, and repeat the algorithm. The idea is to divide the triangles into smaller and smaller triangles in a methodical way.

- Every time a triangle is divided in four, its area is divided by four

- In order to divide a triangle in four, the devil must move at most a distance equal to $7/4$ times its base: $1/2$ each move from midpoint to midpoint, maximum three such moves (D→E→F→D), plus $1/4$ to set up in the midpoint of the appropriate side of a subdivision (E→G, F→H or D→J).

If the devil could perform these subdivisions an infinite number of times, then the area of the triangle containing the victim would be $\lim_{x \to \infty} \frac{a}{4^x} = 0$. (The initial area doesn't matter so why bother calculating it).

Now, is it possible to move long enough to perform all the subdivisions in a finite amount of length? That's the same as asking "Does the following infinite sequence converge?" $$\sum_{n=1}^{\infty} \frac{7\sqrt[]3}{2^{n}}$$ Since I absolutely suck at doing these calculations (and I have completely forgot the "infinite sequences" chapter from my calculus classes), I cheated a bit by using wolfram-alpha. The sequence does, in fact, converge, to $7\sqrt[]3$ or about 12.124 units of length.

The victim's strategy would be

to lead the devil's movements by an infinitesimal distance, so the devil cannot choose the right subdivision until said subdivision is complete.

The generalized strategy explained above provides an upper bound for the distance the devil must move, but has two characteristics that intuitively look like problems: (a) the devil backtracks, potentially wasting movement and (b) the search space is way bigger than needed.

The backtracking issue can be optimized by 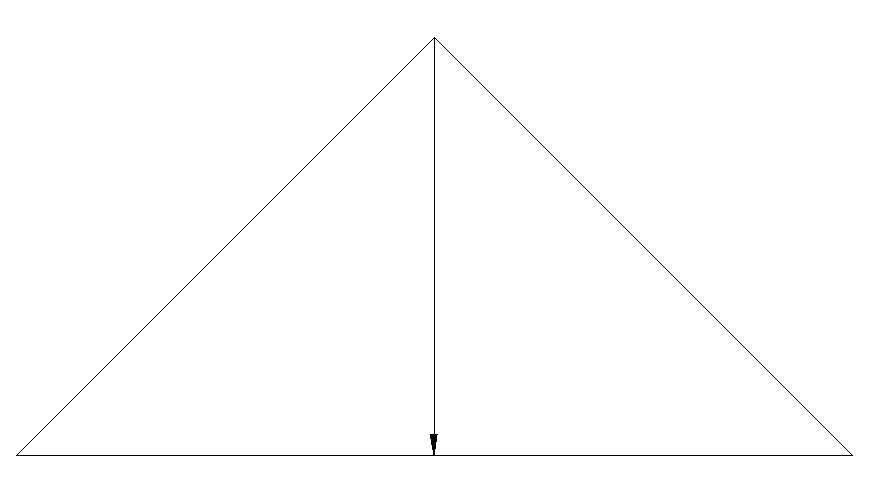 As before, the devil splits a triangle, checks the subdivision containing the lost soul, and recursively proceeds to split that. The devil will follow a fractal path looking like: 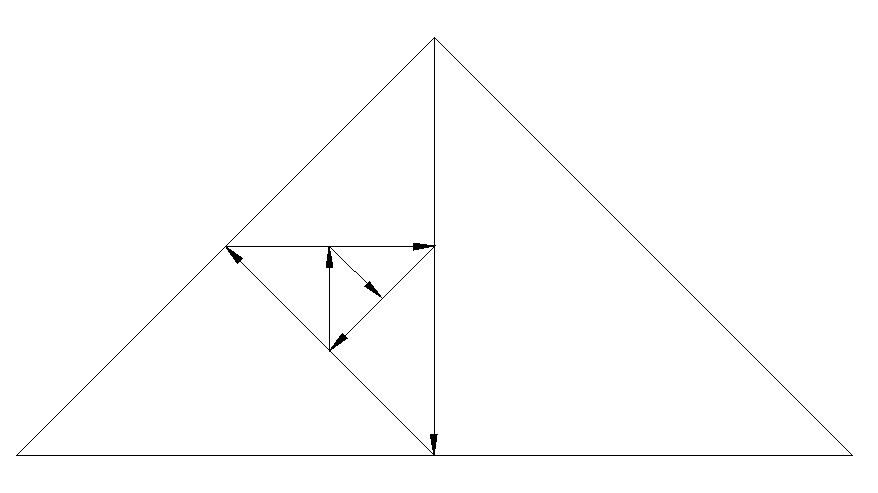 That seems to solve the backtracking issue, but what about the wasted search space? A possible approach would be for the devil to start moving on a path like... 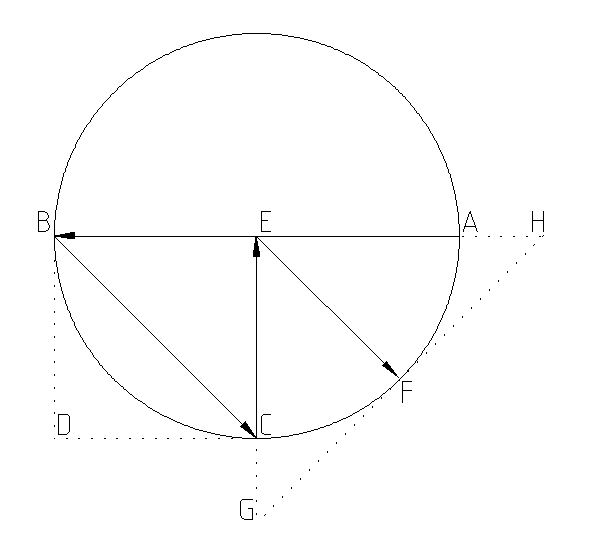 That's significantly better than before (better for the devil, not for the poor soul), but I suspect that it's still not the lowest upper bound possible. The victim's strategy would remain unchanged, and would still depend on knowing the devil's optimal strategy.

If the devil always chases straight after me, following my movements tropistically, then

it seems like I should be able to always stay one step ahead of him at any speed, and lead him on a convoluted meditation-labyrinth-style path almost indefinitely.

But if he's smarter than that,

he'll probably ignore my location altogether and just keep hemming me into smaller and smaller patches of the disk, as the hint suggests. 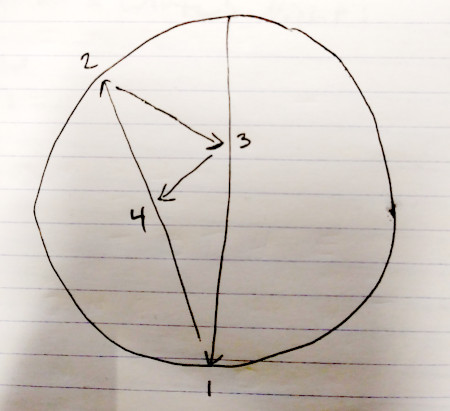 In that case, my instinct would be to cower on the other side of the circle (or circle portion) from him (i.e., first near point 1, then 2, then 3, then 4, etc. -- where he aims each time to cut the portion I'm in again in half), and dodge to one side or the other at the last moment. (I use the word "cower" even though the question says I move continuously -- I'm assuming little jittery back-and-forth movements would amount to the same thing as staying still for all intents and purposes. [Also the hint uses the word "stay".)

But I must be missing something, because variations in my speed wouldn't seem to matter to this solution, as long as I can move at least as fast as him.

Though at first instinct getting as far away as possible from the devil sounds good, I think a good strategy would be to

position yourself close to him, very near to the perimeter of the circle. Then move around the perimeter at the same speed as the devil, slowly spiraling toward the center. The closer to the devil that you start, the wider will be the remaining space after circling. Also the closest you can come to the fiery trail, the bigger you can make the spiral. That will allow for a lot of time for the angel to come and zap the devil.

Note that this will only work if the devil just chases mindlessly by the shorter path to you. If the devil is more interested in strategy than chasing, you're doomed. Also this requires a speed equal or faster than the devil.

This is a strategy that I think the devil should be using, but I don't have a proof that it works. Maybe someone else can supply either a proof or a counterexample.

Consider V=1 first. The devil starts by moving to the center of the circle completly ignoring you. This takes 1 time unit. At this point the devil is at distance at most 1 from you. Therefore any point you can reach at time T=2 the devil can reach by T=2 as well. That is what the devil will aim for.

At any time t in [1,2] the devil will look at your velocity (as a vector) and assuming you continue moving at that exact speed and in that direction compute where you will be at T=2 and then move at maximum speed towards that point. I'm fairly sure that this guarantees that the devil will have caught you at T=2 at the latest but I don't have a proper proof.

This should also generalize to V>1. Either by looking farther into the future or by first carving the circle into smaller pieces one should be able to use essentially the same strategy.

14
Escaping a hungry lion you can't outrun
38
Variant of lion and 100 zebras
3
Game against the Devil
26
Lions and Zebras on a Chess Board
48
The vicious wizard...and you!
12
Can the policeman actually catch the thief, instead of shooting?
21
Can you survive this infinite zombie attack?
8
Survive the infinite zombie attack II
7
Can you distribute the balls equally into 2 boxes?
22
Dividing a piece of land