The following diagram depicts a Pass the Baton tournament 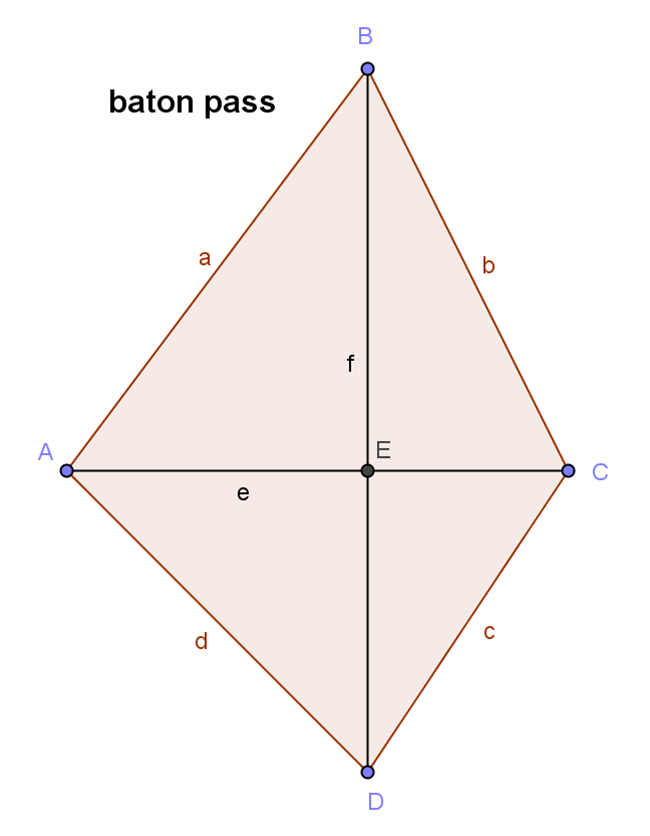 (Note: due to a merge, some of the answers below use this image instead.)

The challenge for the teams is not only to run as fast as they can but to select the best route, by selecting the best points on $a$, $b$, $c$, and $d$ to have the relay runners stand.

What is this route?

In any locally minimal solution, the paths must reflect off the edges, with equal angle of incidence and reflection. This is because reflecting a leg of this this path makes a straight line between one point and the reflection of the other, the shortest distance between two points.

So, we can find the shortest path by reflecting the figure over a, then the result over b, and connecting the original point E to the final one. This gives a cycle from E to a to b to E. We then do the same for c and d. Taking the union of two cycles gives the full cycles.

(Sorry, I can't draw a diagram now because I'm on my phone. ) 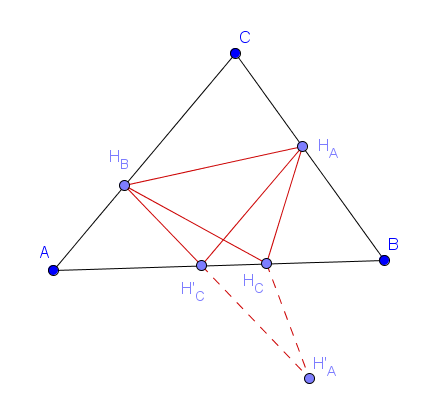 The best possible path therefore satisfies $\angle H_BH_CA = \angle BH_CH_A, \angle H_CH_AB = \angle CH_AH_B$ and $\angle H_AH_BC = \angle AH_BH_C$, otherwise there would obviously be a better path. These three conditions are satisfied exactly when $H_A$, $H_B$ and $H_C$ are the altitude basepoints of the triangle. To verify that, use the inscribed angle theorem a bunch of times on the Thales circles over the three sides. 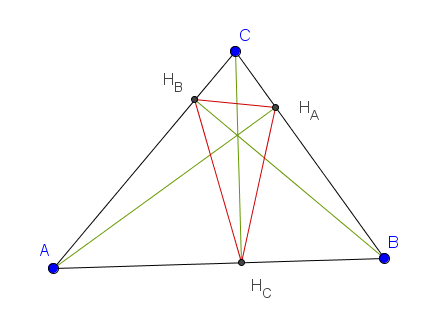 So the best path for the first half of the race starts and ends at the orthogonal projection of $B$ onto $AC$, which is conveniently $E$.

The best path for the second half of the race starts and ends at the orthogonal projection of $D$ onto $AC$, which is just as conveniently also $E$.

The optimal path for the entire race is therefore this: 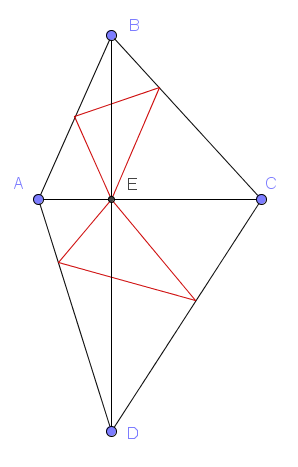 Here's a brute-force solution involving calculus, in the absence of anything more elegant at the moment.

If we've defined these, then we can define a total distance function $f(p_a, p_b)$ as follows:

This function appears to be differentiable, and graphing them in Wolfram Alpha shows that they have a global minimum when their partial derivatives are both equal to zero.

You can define $g(p_c, p_d)$ similarly, and since they're independent, we can minimize each of them individually and that will minimize the sum.

The partial derivatives are sort of tedious, though, so I'll put them off until later.

Edit: Incorrect
My answer would be:

I think the answer is as follows:

(Another way to put this: Your path from P to AB to BC and back to P must be one that light could travel, if the sides of the triangle were mirrors.)

Now do the same thing to the lower part of the picture, with the same conclusion. Except that it will make things a little nicer if we traverse the second half of the path in the opposite direction from that given in the question -- from P to CD to AD and back to P -- which becomes a path from P via CD to A''D and then to A''C'' at point P''.

Now, it seems this path will be shortest when it's a straight line from P' to P'', which ... ah, but no, this is wrong, because P' and P'' are not fixed points; when P moves so do they. So, what's the relationship between these points? Answer: P' is what you get from P by rotating clockwise about B through twice the angle at B (in triangle ABC), and P'' is what you get by rotating clockwise about D through twice the angle at D. Hence the distance PP' is 2 BP sin B and PP' is 2 DP sin D and we're trying to minimize BP sin B + DP sin D. If ABCD were in arbitrary places this would (I think) be fiddly but in this case it happens that point E minimizes DP and BP simultaneously and hence minimizes BP sin B + DP sin D (since both those sines are positive).

So Areeb was partly right and we should start and end at point E. But the path we take should be the one I described above (reflect, draw a straight line, and then reflect back into the original triangle) rather than going straight to B/D and back again.

Not an answer. Maybe a clarification?

Based on the number of comments, it seems that there is a bit of confusion surrounding this puzzle. This is my interpretation of how an answer might look. The runner starts at the point shown by the arrow, then runs through segments 1-6 in order.

The puzzle does not specify that the "touch and go" points on the ABCD diamond are fixed, so I assume we have freedom to build a course however we wish.

Is this correct or have I missed something? 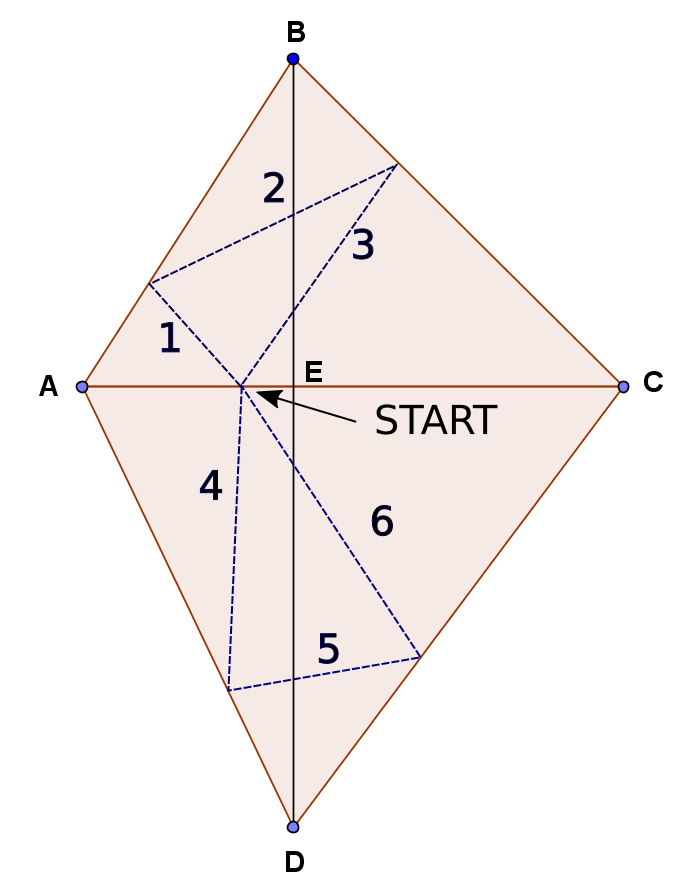 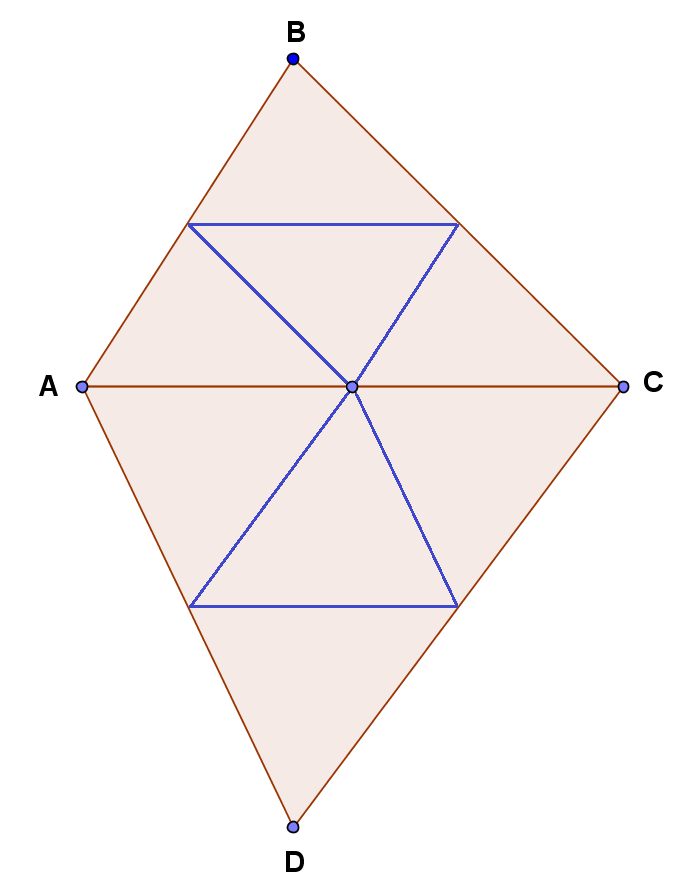 Still working on a proof.

I haven't read any of the spoilers yet, but I would guess the shortest line would be from

B is on both AB and BC; likewise D is on both AD and CD. This eliminates two of the line segments in the path. I'm pretty sure I can prove this using the triangle rule.

I will work out the math after checking the other answers.

Not the answer you're looking for? Browse other questions tagged geometry optimization or ask your own question.

2
Make a wide tower of bridge-shapes
4
Tune a podracer and choose the pilots by solving the podracer tuning equation
20
Ernie and the Drill Test
2
Play against all other team members
15
Ernie and the Slow Glass Solution
5
Surviving the Zombie Apocalypse
11
How many circles needed to pass through each of 5x5 lattice points?
10
Two football teams