Ernie and the Social Network

Ernie finally made it home over the weekend, so I dropped in to give him a bit of help tidying the house (the house sitters hadn't been the most dependable people). We were just finishing the vacuuming when there was a knock on the door and, upon opening it, we found an official looking delegation waiting on the front step. They introduced themselves as agents Alpha, W, X, Y, and Z of SPASM (Secretariat for the Preservation of Autonomy in Social Media), and told Ernie that they needed his help to defeat agents of SMUDGE (Social Media - Universal Domination GLobal Enterprise) in their attempts to monopolize social media world-wide. Ernie has little interest or involvement in social media, but he does have a soft spot for kitten videos, so he was happy to help.

"We have uncovered a plan to insert a virus simultaneously on all major social media platforms." Alpha explained, "The virus is designed to insert inappropriate comments, photographs and videos on everyone's media posts - thereby forcing them onto SMUDGE's alternate platform which will corner the market. Luckily", Alpha continued, "we managed to bug a meeting between a couple of their agents at a local coffee shop. Unfortunately, agent W who was in charge of recording the conversation had some problems with his electronic eaves-dropping software, so we only have a partial recording". And he showed us a transcript of the conversation which read as follows:

Transcription begins:
Voice 1: So you will go to the airport at [#data corrupted#] where you will be passed a thumb-drive with the virus.
Voice 2: Wait a moment while I write that location down [#5 second pause#].
Voice 1: Then you make whatever flight connections you need to get to the airport at [#data corrupted#]. There is a server farm nearby. Break into it and inject the virus into the network.
Voice 2: Just let me write that location down too [#6 second pause#]
Voice 3: Halt - you are under arre...[#loud crashing noise#]...[#expletive deleted#]
Transcription ends.

"Not much to go on", Ernie commented, "did you capture the agents". "Unfortunately not", Alpha replied "agent X who was in charge of the arrest squad tripped over an umbrella and the two SMUDGE agents escaped. Luckily, they were in such a hurry that they left some paperwork behind. But it appears to be written in some sort of foreign language or code - that's where we hoped you might be able to help". And he showed us a detailed photograph of a note the SMUDGE agents had left behind. 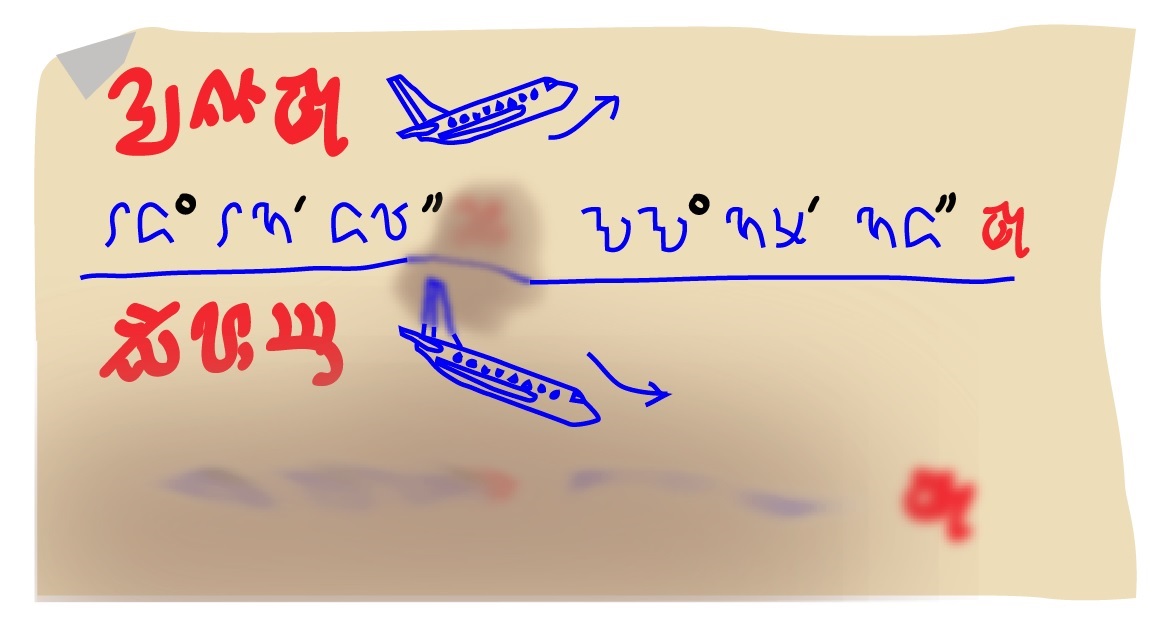 Ernie studied the note "Not much to go on here", he said, "whatever happened to the bottom half of the note?". "Unfortunately," Alpha replied, "our forensic agent Y spilt her coffee on the note as she was about to photograph it - and the ink was water-soluble". "Well", Ernie said after a pause, "I can guess what the various components of the message stand for, and I am almost certain that the note isn't written in a foreign language but rather in some sort of home-made substitution code. But without more information I don't think I can possibly decode it. Was there any other evidence?"

"Nothing relevant.", replied the leader. "I guess we will have to try elsewhere for help". But just then agent Z spoke up from the back of the group. "Except for the cross-word puzzle...". And against the protests of Alpha, W, X, and Y that this was just time wasting, Z showed a second photograph to Ernie. Ernie's eyes jumped back and forth between the two images. 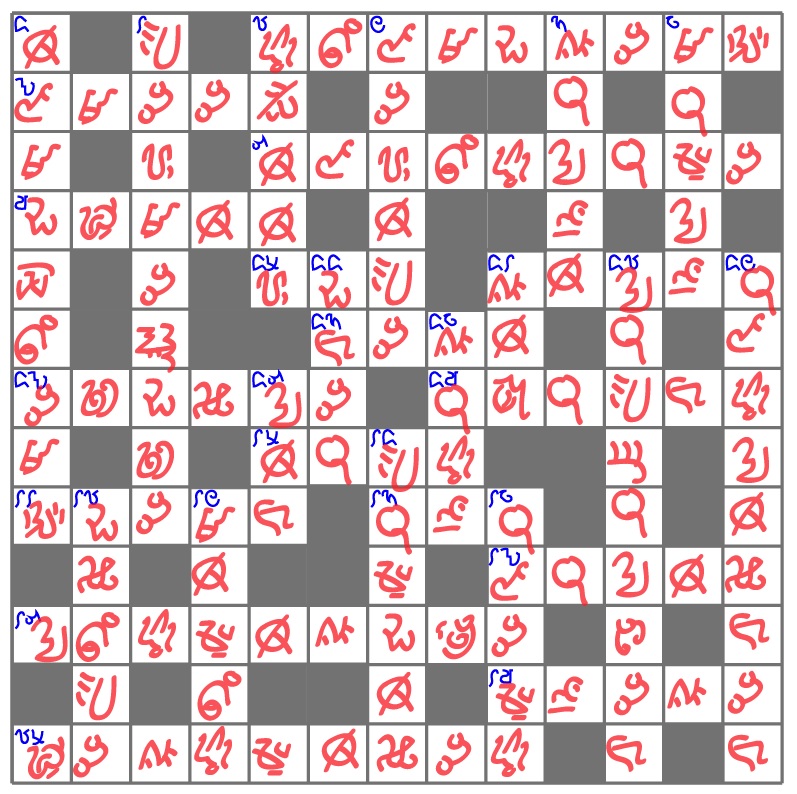 "Well", he said after a few second's pause, "I am pretty sure I can tell you the location of the departure airport...".

He quickly opened up Gargoyle Maps on his phone and continued "...which gives me a name for the departure airport..."

He now stared at the second photograph in silence for some minutes then glanced back at the first one "...and that means I am now almost certain of the name of the arrival airport".

As soon as that happened, Alpha muttered something about the Official Secrets Act and I was ushered out of the room. The agents spoke with Ernie for a couple of minutes and then hurriedly left. Ernie won't tell me the details of his discoveries, but I assume he got things right as, last time I looked, we still appear to have a whole bunch of active social media platforms. Any idea how he managed to save the day?

This is a really nice puzzle! To break into it...

Note that what has been written in the photograph of the note is a pair of airports, with their 3-letter IATA codes and their geographical coordinates in the form {xx° xx'xx" N/S, yy° yy'yy" E/W} where the x's and y's are numbers. While at present we have no immediate way to identify the letters in the IATA codes, we can identify all of the numbers using the numbers of the crossword clues in the grid (since these are always arranged in numerical order, starting at 1). 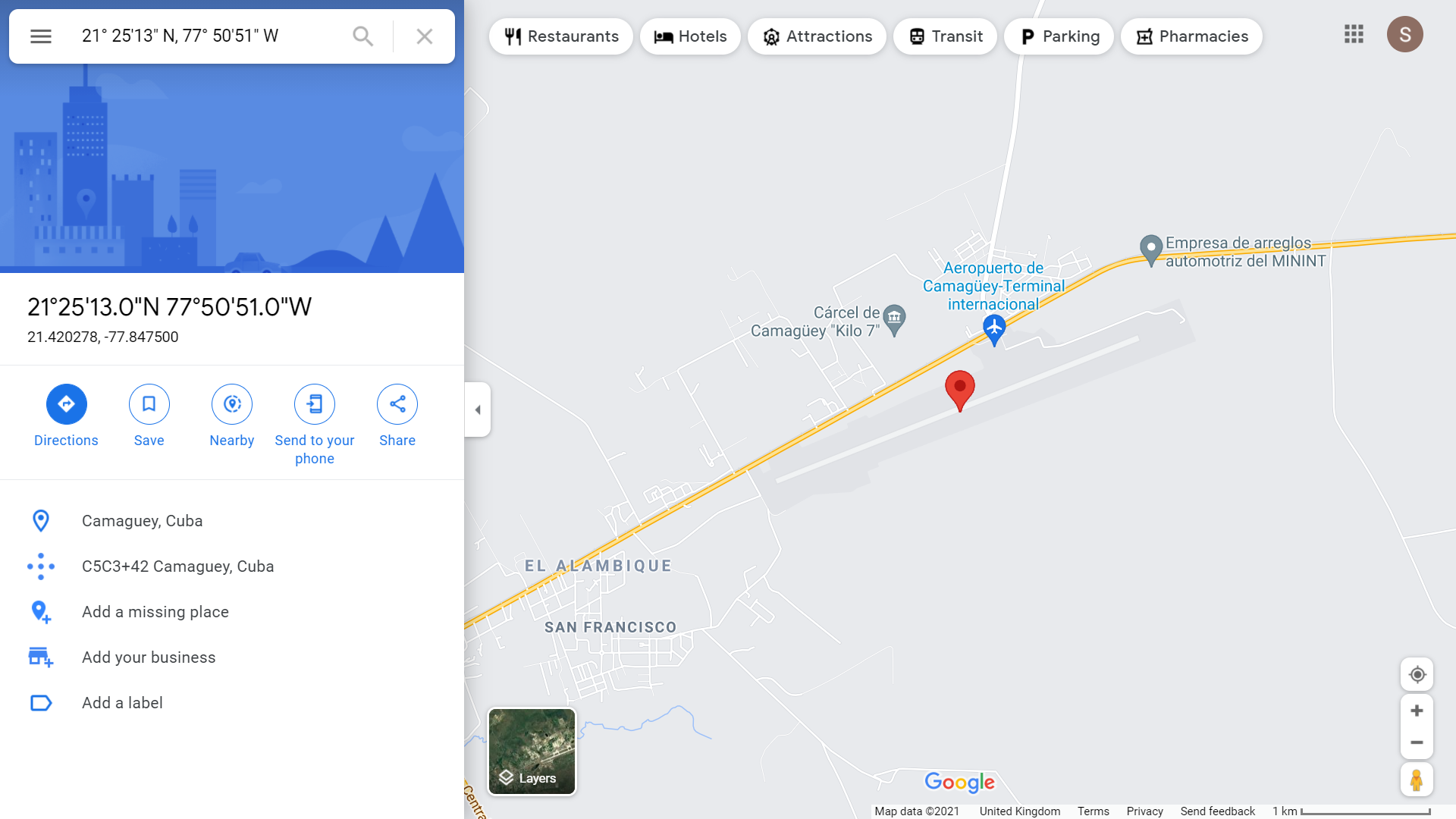 Conveniently we can see that the third character of the IATA code does indeed match the 'W' in the coordinates, as a useful double-check of correctness since they share the same symbol. 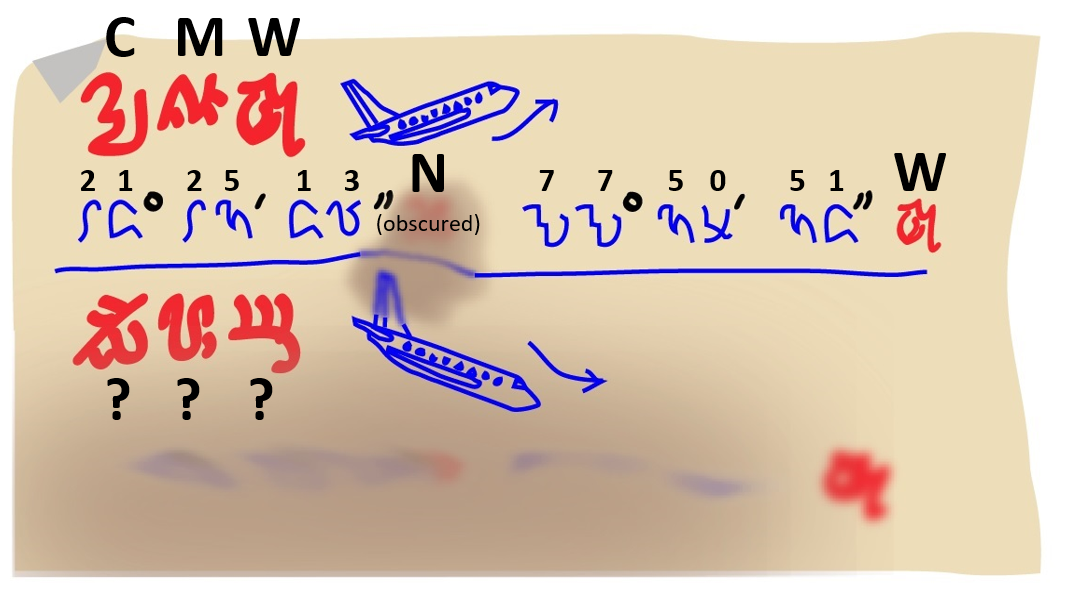 So we know where the plane was leaving from - where was it travelling to? Without any coordinates to find this out (all the numbers are obscured by the coffee spill), we need to:

Treat the solved crossword as a 'codeword' (or 'cipher crossword'), substituting the thus-far known letters from the IATA code we have already discovered, in order to work out what letters correspond to the three unknown symbols in the second IATA code.

The logic that I followed to solve this was roughly as follows:

1. Substitute the letters we know already: 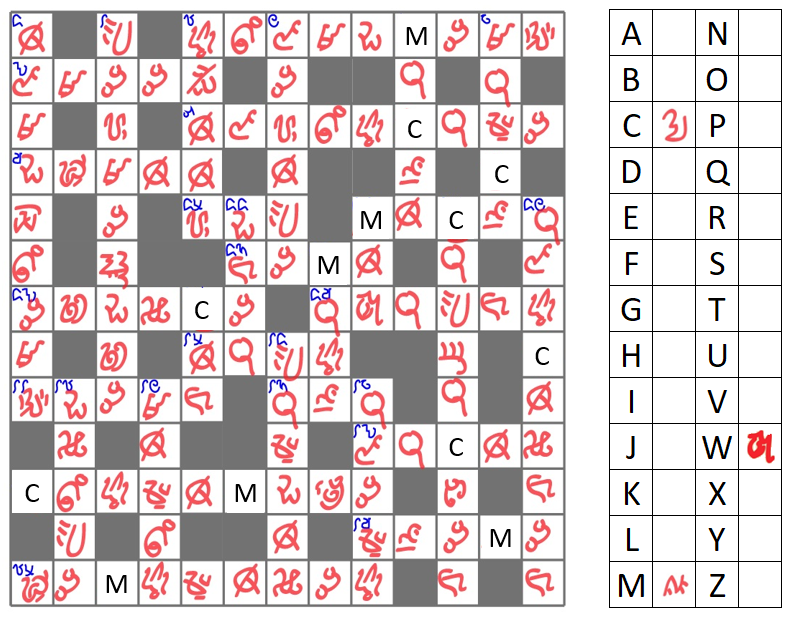 2. Spot that the pattern of the two intersecting words in the top-right corner means they must in all likelihood be MOCHA and MACHO in some combination: 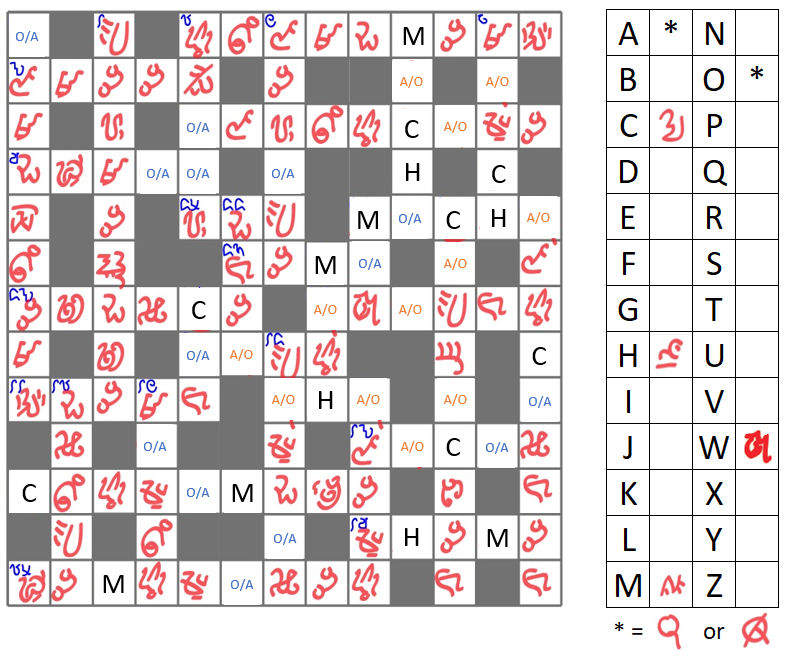 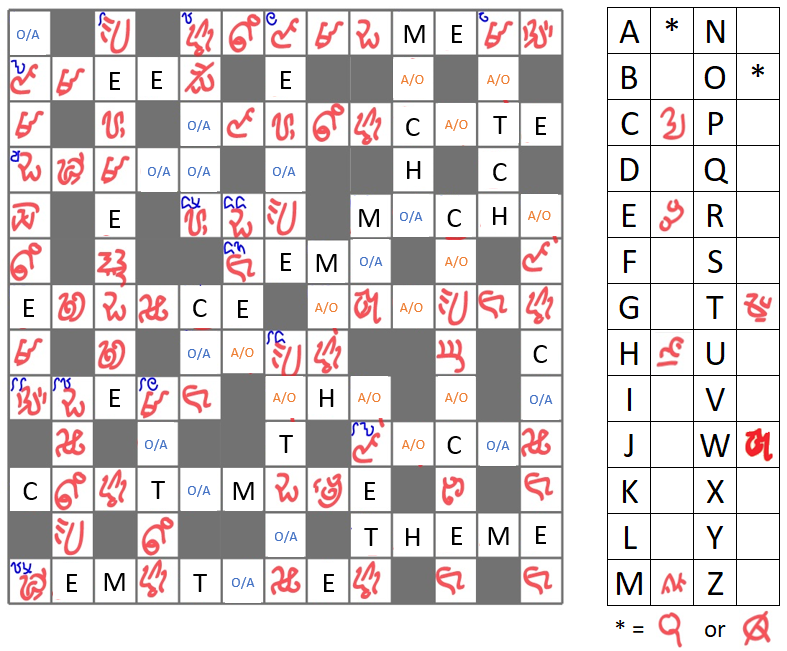 4. Note the two pairs of adjacent identical 'O/A' characters in the top-left corner are likely to be O's, giving us an 'A' just right of the centre tile, producing MASH reading downwards and OARS intersecting with it: 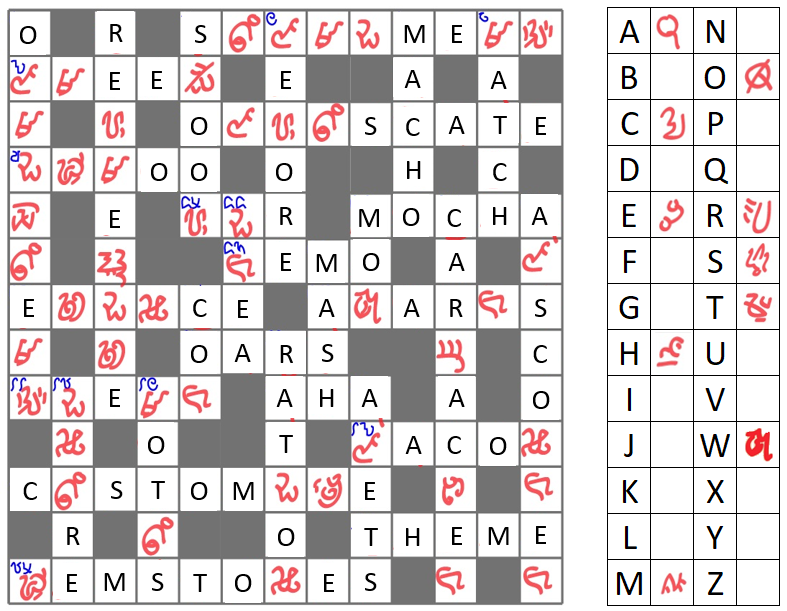 5. Spot several other recognisable words: GEMSTONES, CUSTOMIZE, IGLOO... and the rest of the puzzle falls into place: 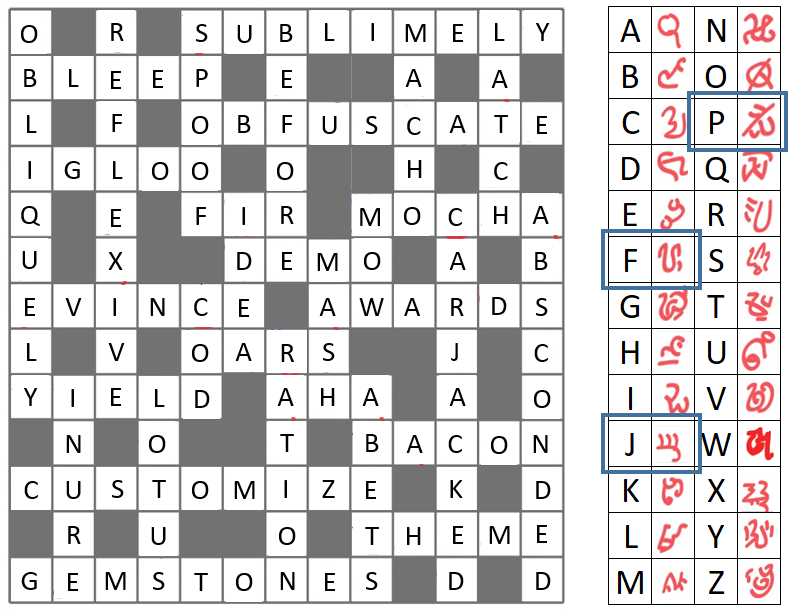 Finally, we can identify the 3 characters in the destination airport IATA code: 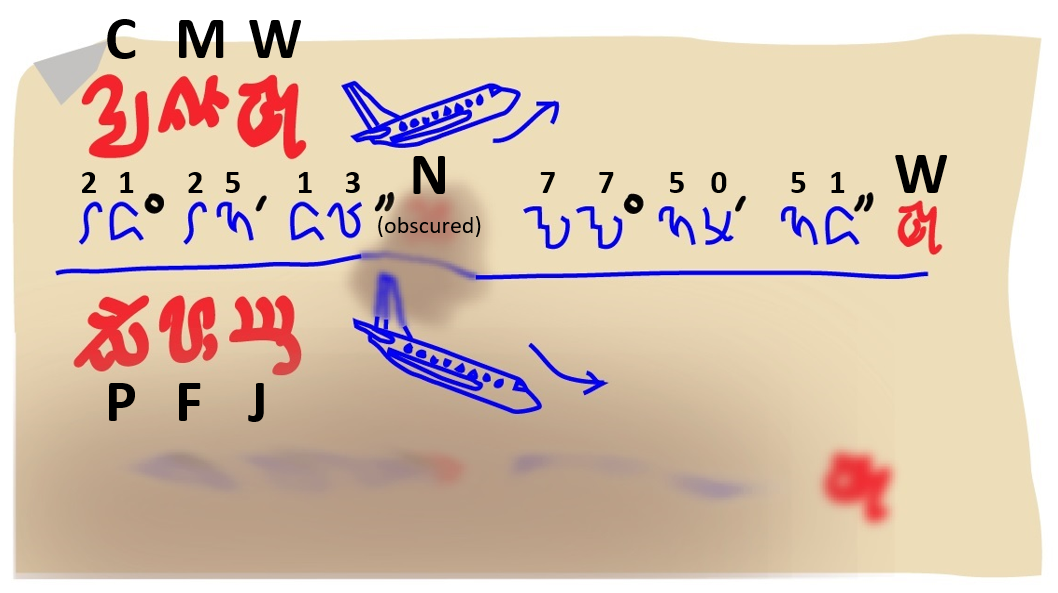 PFJ - Patreksfjörður Airport, Iceland. Notably, this airport is disused, having been closed down in 2011, making it a very useful destination for the criminals. Now quick, let's get to Iceland and head them off!

Not the answer you're looking for? Browse other questions tagged cipher visual story or ask your own question.