答えはまた二桁の数字、その３ (The answer is another two-digit number, #3)

A colleague at work gives you a slip of paper at work one day, with symbols written on it:

Every symbol in Japanese hiragana appears on the grid except for す and ん. The question is simple: Where does す go, and what number corresponds to it?

Solved it :-) The puzzle is based on two things:

いろは (iroha), an ancient Japanese poem that uses every hiragana character once only (except for ん),

Carry on in this fashion to the end of the poem, and you'll end up with the following grid, where characters that are filled in on the first, second and third pass are coloured red, orange and blue. 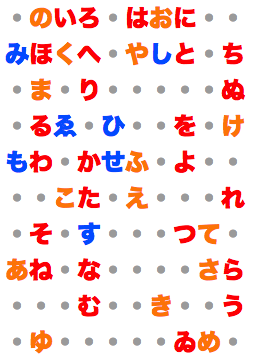 The final character す can be found in the 4th cell of the 7th row, which corresponds to the number 63.