Sport climbing is a new event (one of four) at the 2020 Summer Olympics in Tokyo, and it just finished. Two events were held, one for men and one for women. The format consists of three disciplines: lead climbing, speed climbing and bouldering. The winner is determined based on who performs best in all three disciplines.

The final scores of the women's final round of sport climbing at the 2020 summer Olympics were as follows:

As you can see, there were ties after multiplying the competitors' scores. Because these ties were both head-to-head (between two competitors), they were resolved by comparing the relative performance of the tied competitors in the three disciplines: whoever was better in more of the disciplines is ahead in the final order. (So, for example, we know that Brooke Raboutou performed better than Anouck Jaubert in more individual disciplines.)

Part one: Who were the winners of the three individual disciplines? (Of course, it's not possible to distinguish the disciplines from the information provided – how could you tell the difference between, eg, lead and bouldering? – but it's possible to say who the winners were.)

The speed discipline has a rather unusual format. The competitors are seeded from 1 to 8 based on an earlier round. Then, in a standard bracket pairing (1 vs 8, 2 vs 7, 3 vs 6, 4 vs 5), the competitors compete in pairs for who can climb a standardized speed wall faster. The winners proceed to a winners bracket, while the losers proceed to a losers bracket. Everyone continues to participate in two more speed climbs; for example, one of the pairs in the second part of the bracket is (the winner of 1 vs 8) vs (the winner of 4 vs 5). After three such climbs, the contestants end up "sorted" and receive a corresponding rank.

It's honestly very hard to describe this process in words. Here's a picture of the bracket used: 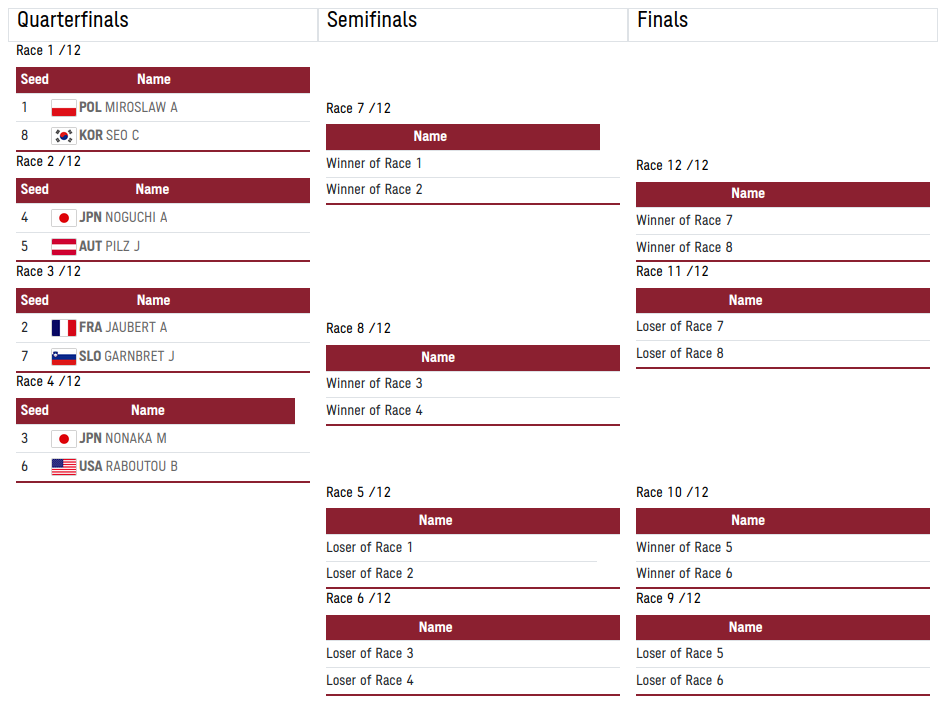 As you can see in the image above, the seeds for the speed round were as follows: 1. Aleksandra Mirosław, 2. Anouck Jaubert, 3. Miho Nonaka, 4. Akiyo Noguchi, 5. Jessica Pilz, 6. Brooke Raboutou, 7. Janja Garnbret, 8. Seo Chae-hyun.

Bouldering and lead use a more straightforward format, which I will not describe here because the information does not help reconstruct the results. For both the bouldering and lead disciplines, the competitors climb and end up with ranks from 1 to 8 in a relatively direct manner.

Necessary hint for the puzzle below: I personally find the lead discipline rather enjoyable to watch, as I enjoy lead climbing myself. It's nice that the winner of the lead discipline did so well overall, but I was sad that the 2nd and 3rd places in lead (who, presumably, would have won the silver and bronze medals had there been separate medals for lead climbing) ended up in the last two places (7th and 8th) of the combined ranking!

Part two: What were the full sorted orders of the competitors in all three disciplines?

Starting from the beginning:

We can unambiguously determine the three factors used in 1st, 2nd and 7th places; they must be 1x1x5, 3x3x5, and 3x6x5 respectively, since no individual placement can be greater than 8.

Then, onto 5th and 6th places

breaking 84 down into prime factors, we have 2x2x3x7. Since our 2nd and 7th places must already account for all three 3rd places, they must both be 2x6x7.

1x8x8 always loses the tiebreak, since in the 2x4x8 case the 1st place must necessarily line up with the other contestant's 8th.

On to Part Two:

The hint resolves the ambiguity and

puts Seo on a 2nd place, making her placements 2nd, 7th and 8th. Seo also did not get 8th in lead (she got 2nd), therefore, Miroslaw (who placed 8th in 2 disciplines) did, putting Garnbret in 1st on the discipline. Raboutou and Jaubert must have gotten 6th and 7th. Since Raboutou outranks in the final standings with the same set of results, she must have placed 6th here (to be able to win the tiebreaker 2-1). Once again, our hint resolves the last ambiguity; it places Pilz in 3rd in Lead, and thus Nonaka must be 5th.

On to the Speed bracket:

By elimination, Bouldering results must be

Not the answer you're looking for? Browse other questions tagged mathematics real sports or ask your own question.

25
Rock climbing at the Tokyo Olympics