The end of a wild ride

This is part 13 of the puzzle series that started at Living the traveller's dream. Each part is solvable on its own. 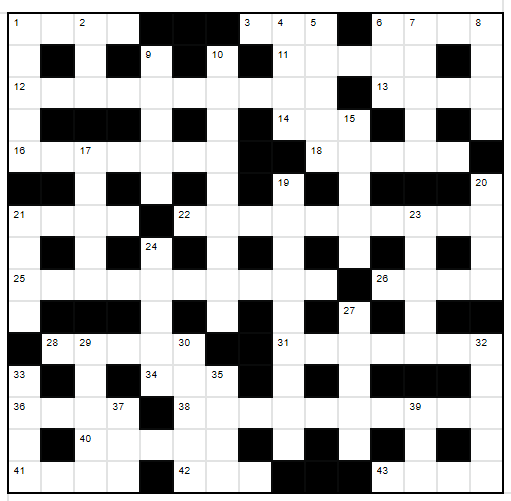 My long trip is finally over. This is my last destination before heading home. It has been a wild ride! I hope you have been paying attention, because you will need all the previous answers for the final puzzle, which I'll send you two weeks from now.

This week I have seen a poet's birthplace and visited a town split in two by an international border. I have walked in enormous citrus plantations, watched a match at a historical soccer stadium, and worked on my tan on a lovely beach sheltered from the ocean winds. Can you guess where I am?

Across
1. Group of musicians from centre of Natal, a city on Brazil's coast (4)
3. Art missing from ancient city resort (3)
6. Orlando ballplayer initially refused to stand out (4)
11. Setter deceives exhausted Ethiopian playwright (5)
12. City vet dies horribly, after cutting his side, in the grips of infectious disease (10)
13. Bottle of cordial left by Ms Stafford (4)
14. Eat and drink (3)
16. (See 15 down)
18. Ripe middle part cut from vegetable's curves (5)
21. Drug enforcer beheaded using bow (4)
22. Article by Times covering fellows accepting no one for ceremonial nomination (10)
25. Home vandalised by Phil and Ivan, regularly resulting in disorder (10)
26. Hurt unknown author with radical views (4)
28. Not available to overtake leader in auto racing to get award (5)
31. A fictional techie's held, vocally, under cloud that's watery (7)
34. The people here escaped London prison network (3)
36. Banks in Canada will do this to Ghostbusters when there's something strange in your neighbourhood (4)
38. Some swell men, dedicated to be returned to good health (4,6)
40. Pulled behind to tie the knot (5)
41. Fiddler on the Roof, say? Who's playing? (4)
42. Social security's starting to produce old software? (3, abbr.)
43. Border town cook gutted fleeing from murderous doll (4)

I am sure Gladys's last destination is:

I believe Gladys stopped by at these locations:

the capital, Montevideo, and the cities Chuy, Punta del Este, Salto, and Melo. 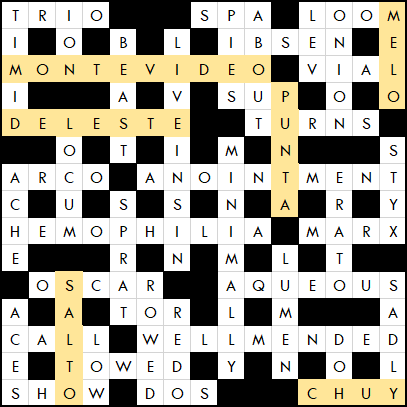 1. Group of musicians from centre of Natal, a city on Brazil's coast (4)
TRIO T + RIO

12. City vet dies horribly, after cutting his side, in the grips of infectious disease (10)
MONTEVIDEO MON(VETDIE(-.s)*)O (mono = mononucleosis)

22. Article by Times covering fellows accepting no one for ceremonial nomination (10)
ANOINTMENT A (NO I) T(MEN)T

36. Banks in Canada will do this to Ghostbusters when there's something strange in your neighbourhood (4)
CALL C.A + 'LL (def starts at "do")

7. Vegetable that's taboo to be put upside down outside of India (5)
ONION NO-(I)NO<

19. Only barely work mill with many, including myself (9)
MINIMALLY MILLMANY(I)*

30. Travelled on waterway? Or pathway on land? On the air? (5)
ROWED ROAD homophone