Blood relations - who is married to whom and reads which magazines?

In a family of eight persons - P, Q, R, S, T, U, V and W - there are four males and four females. There are three married couples and two persons are unmarried. Each of them reads a different magazine, viz India Today (R), India Today (H), Outlook (E), Outlook (H), Frontline, The Week, Businessworld and Sportsstar. No couple reads both the versions of the same magazine.

In the family of two generations, each male member except W has two brothers and one sister.

This is taken from the book, "Magical book on puzzles" by K Kundan.

First, let us determine the relations.
We know that 3 of the 4 male members (the remaining 4th being W) are brothers of each other (otherwise they could not have 2 brothers each). One of them is T (we know that T is male because he is U's brother), and now we know that U is the only sister of the three. Who are T's other 2 brothers?
Obviously neither of U, V and Q, since all of them are female. S is one of them since both remaining male members of the family (apart from T and W) should be T's brothers. But R cannot be T's brother since S is brother-in-law (not the blood brother) of R. So, the 3rd (remaining) brother is P.
So, P, S and T are brothers, and U is their only sister. Since S is the brother-in-law of R, then R (being female) must be married to one of the S's brothers. It must be P since T is unmarried.
Since V is the mother-in-law of R, she must be the mother of P,S,T and U. U is Q's sister-in-law, that is, Q is married to U's brother, namely S (since T is unmarried, and P is married to R). Q is W's daughter-in-law, so W must be V's husband.
Final tree (sorry for the crude drawing, males are squares, females are circles): 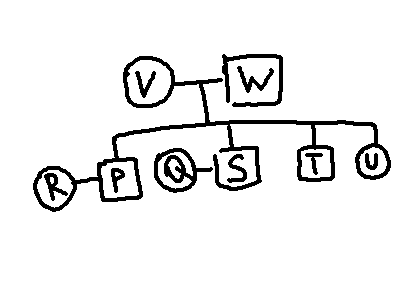 8
Male and female spiders on an infinite web
6
Who killed Boggs? A chandelier’s view
0
Puzzle involving people, favourite monument and work department
1
Circular Arrangement 4 parameters
12
Who Married Whom and When?