Please find below a variant Sudoku which incorporates elements of Star Battle. The Sudoku is a standard irregular Sudoku, and the clues outside the grid are sandwich clues: the sum of digits strictly between the 1 and the 9 in the appropriate row/column must add up to the sandwich clue. In addition, the 1s and 9s in the grid form a solution to a Star Battle with 2 "stars" using the Sudoku regions; in other words, we have the additional rule that no 1 or 9 can be adjacent to any other 1 or 9, neither orthogonally nor diagonally. I hope you enjoy!

Solve online, but note that the Star Battle adjacency constraint on 1s and 9s is not enforced. 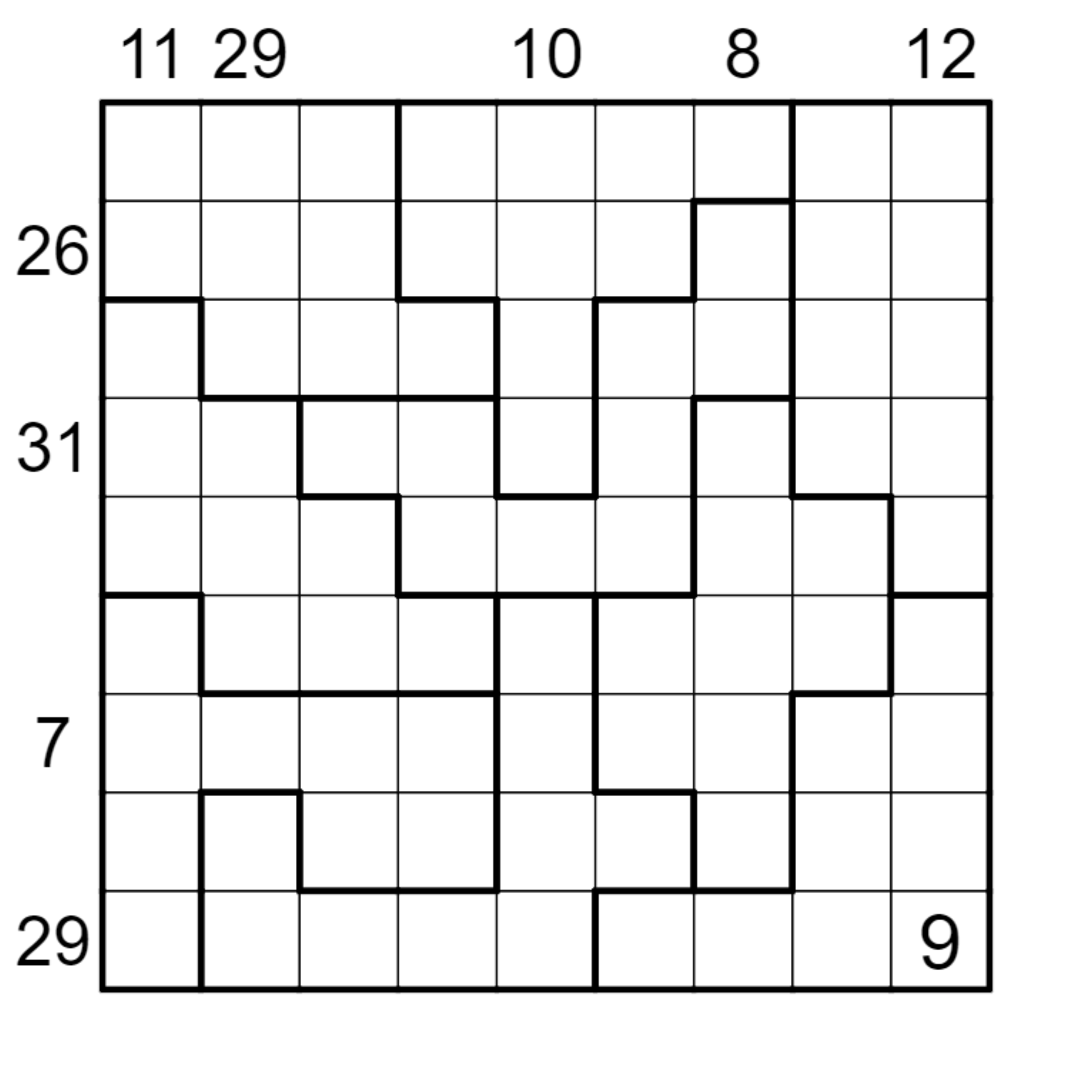 After getting the "easy" first 25 digits, there is a fairly elegant argument that setting R6-7C5 to 4/6 leaves no place for a 4 in row 8.

After applying the first hint and some follow-on Sudoku logic, the 3s and 4s become constrained in the lower rows. You should be able to show that if the 11-sum in the first column is 4/7, you get a quick contradiction in R3-4C1-2.

(This answer is to show the logic after the initial 'simple' first 25 digits, after which it gets much harder)

So, we have our initial 25 digits, as shown in @Amorydai's answer. The grid looks as follows: 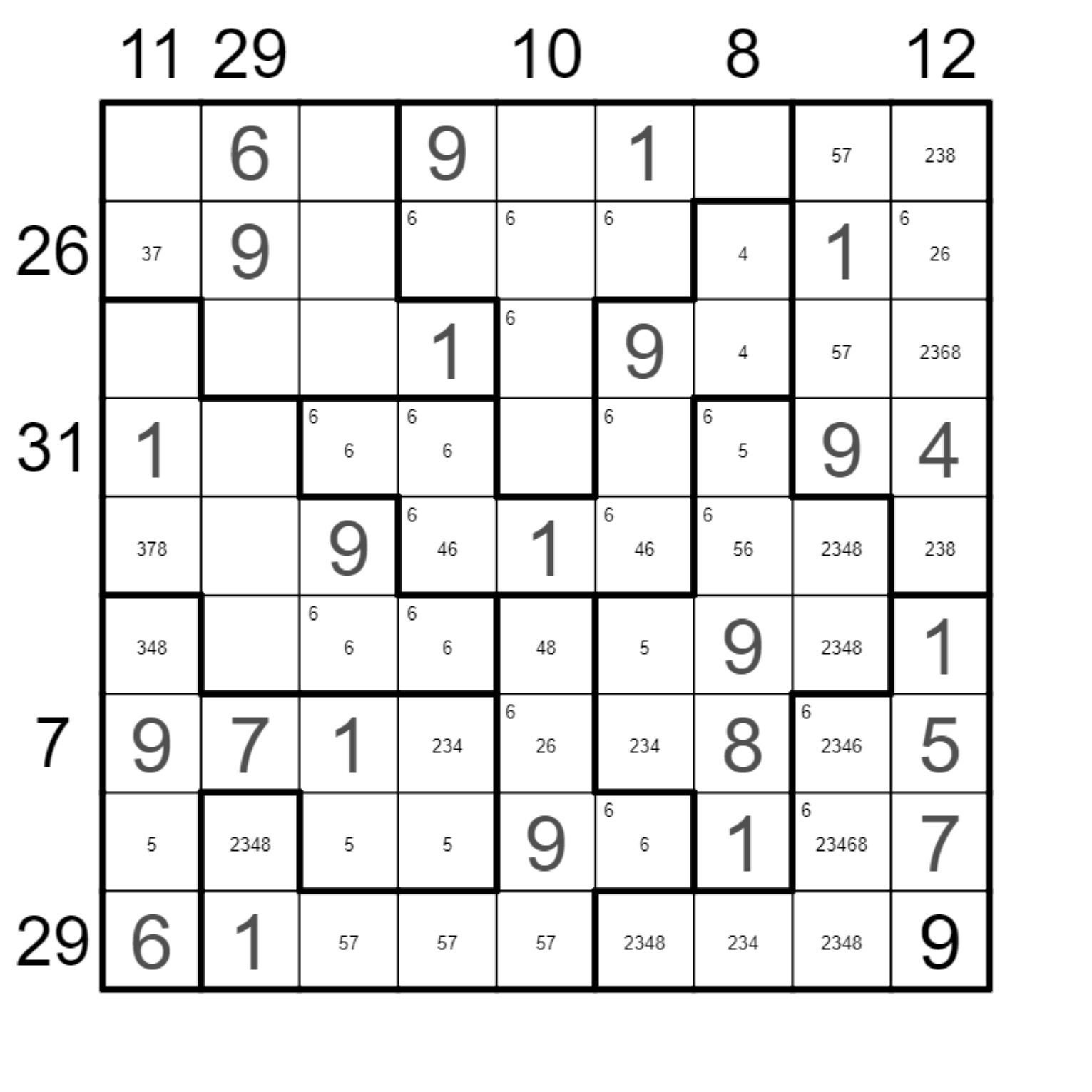 Now the next step of logic, as indicated by the hint, involves the 10 sandwich in the middle column: 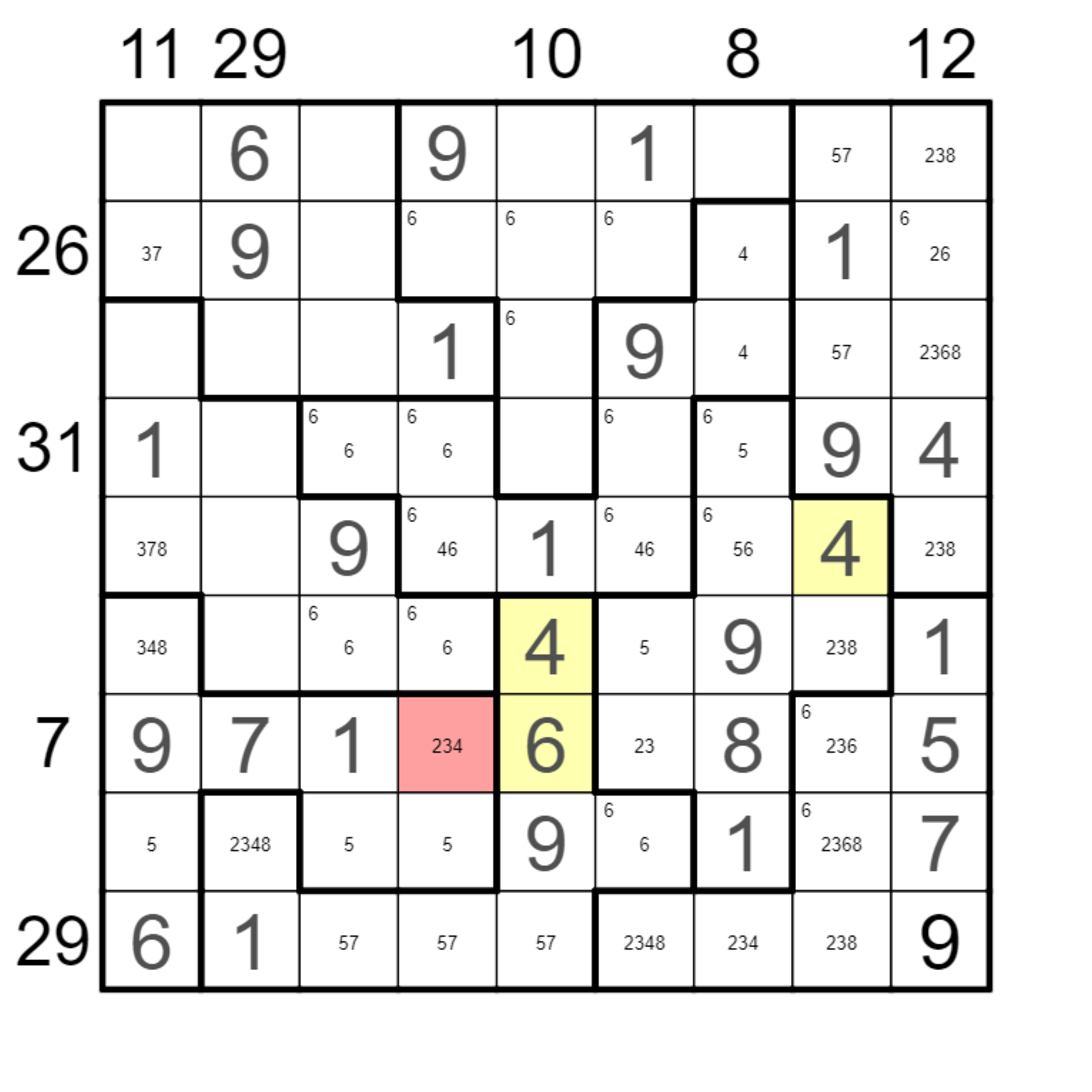 The 4 leaves only one place a 4 can go in C8. This 4 removes a candidate in the same box in R7, leaving the only 4 in row 7 as the highlighted red cell.

With a bit of normal sudoku logic we get to this point: 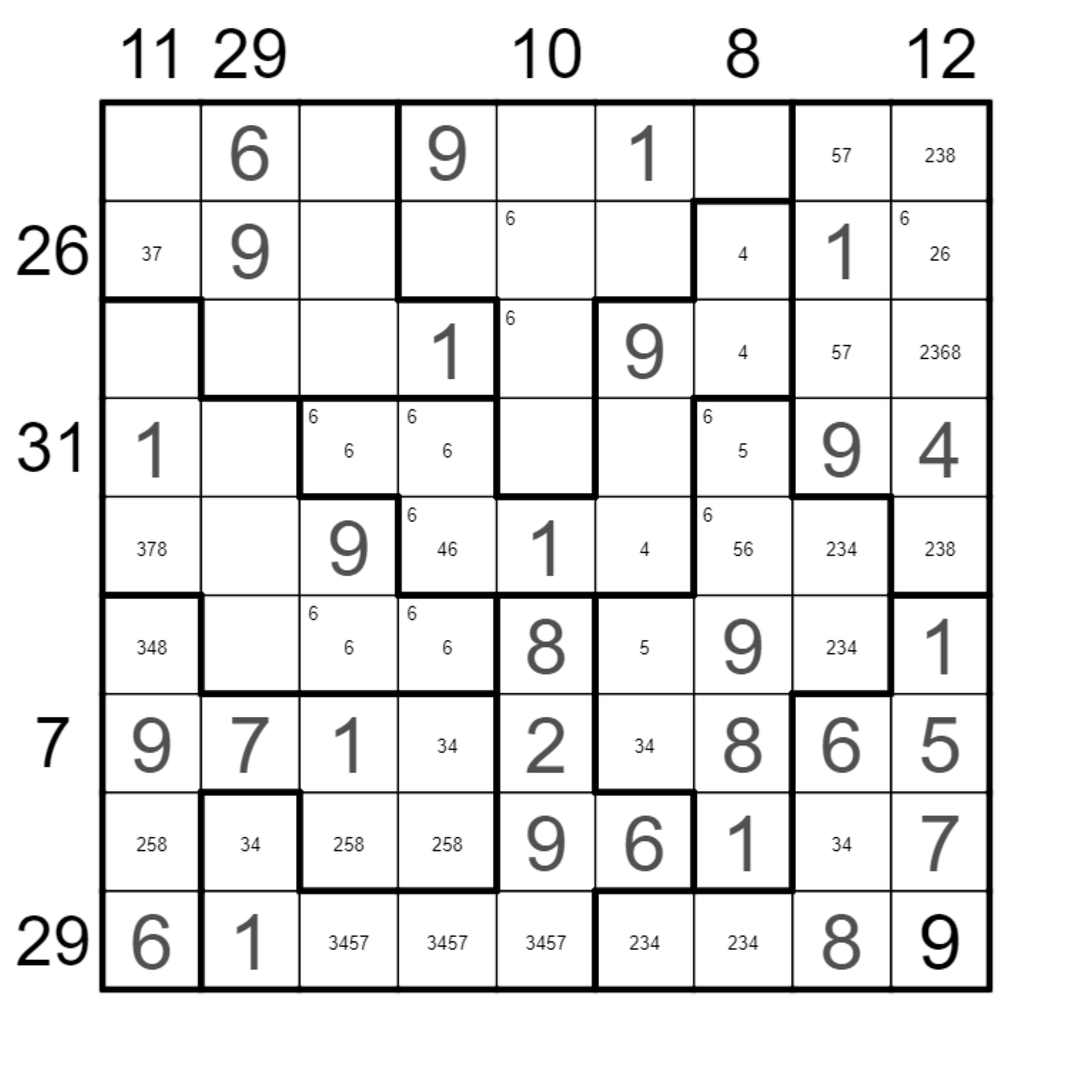 The 6 in R7 could only go in one place, as could the 6 in R8. There is now 3/4s in the bottom two rows in 2 boxes, meaning the bottom left box has a 258 triple, and the 8 in C8 must be at the bottom. There are a couple of 3/4 pairs, and some row restrictions towards the bottom.

Now looking at the 11 pair in the left column: 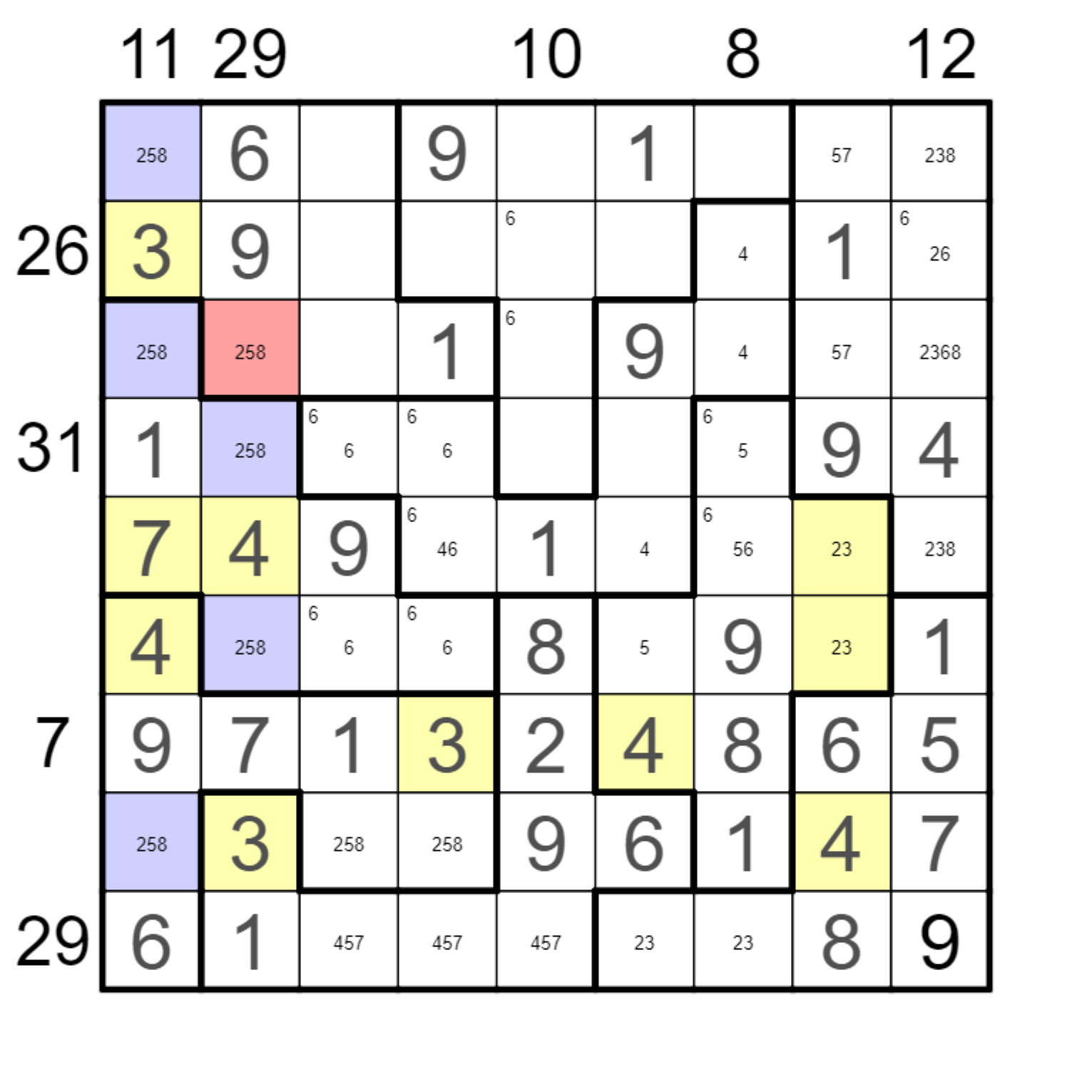 The cells highlighted in yellow are affected and the 3s and 4s in the bottom rows are mostly solved.

However, the interesting bit is C1 and C2. Both have 3 numbers remaining, 2/5/8, highlighted in blue. The problem is the red cell, no matter which number it is, it covers all 3 blue cells in the box below, meaning whatever the red cell is, the box below would not have a place for that number. Hence the 11 pair cannot be 7/4 and is 3/8 or 8/3. And as there is a 2/5/8 triple in the bottom left box, it must be 8/3.

Using these deductions, and with some sudoku logic the digits start to fall into place: 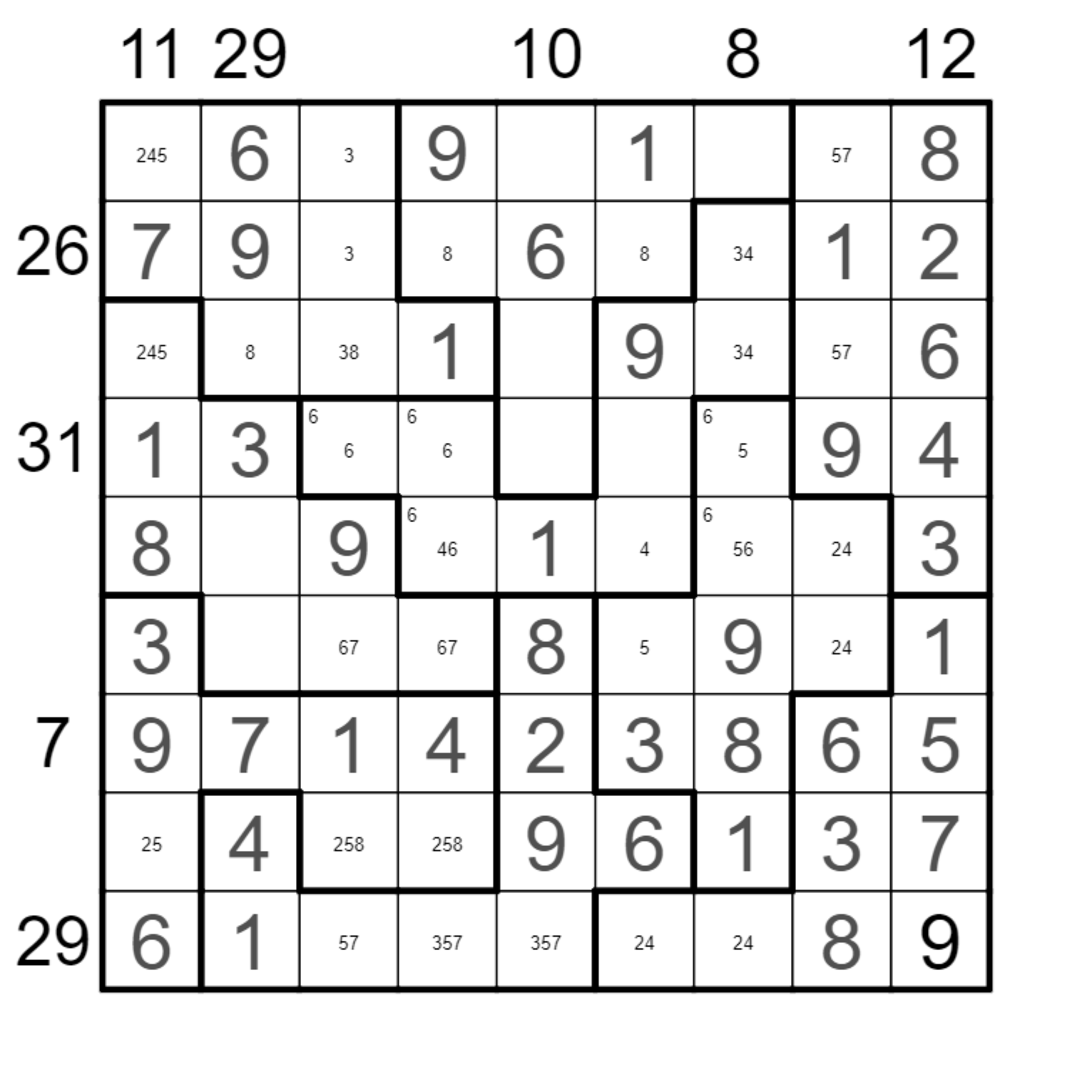 The 3 has a domino effect for the 3s and 4s towards the bottom. The right hand column can be solved, as can the 6s towards the top few rows. The logic gets easier from this point as more numbers are placed.

From here the puzzle can be solved fairly easily: 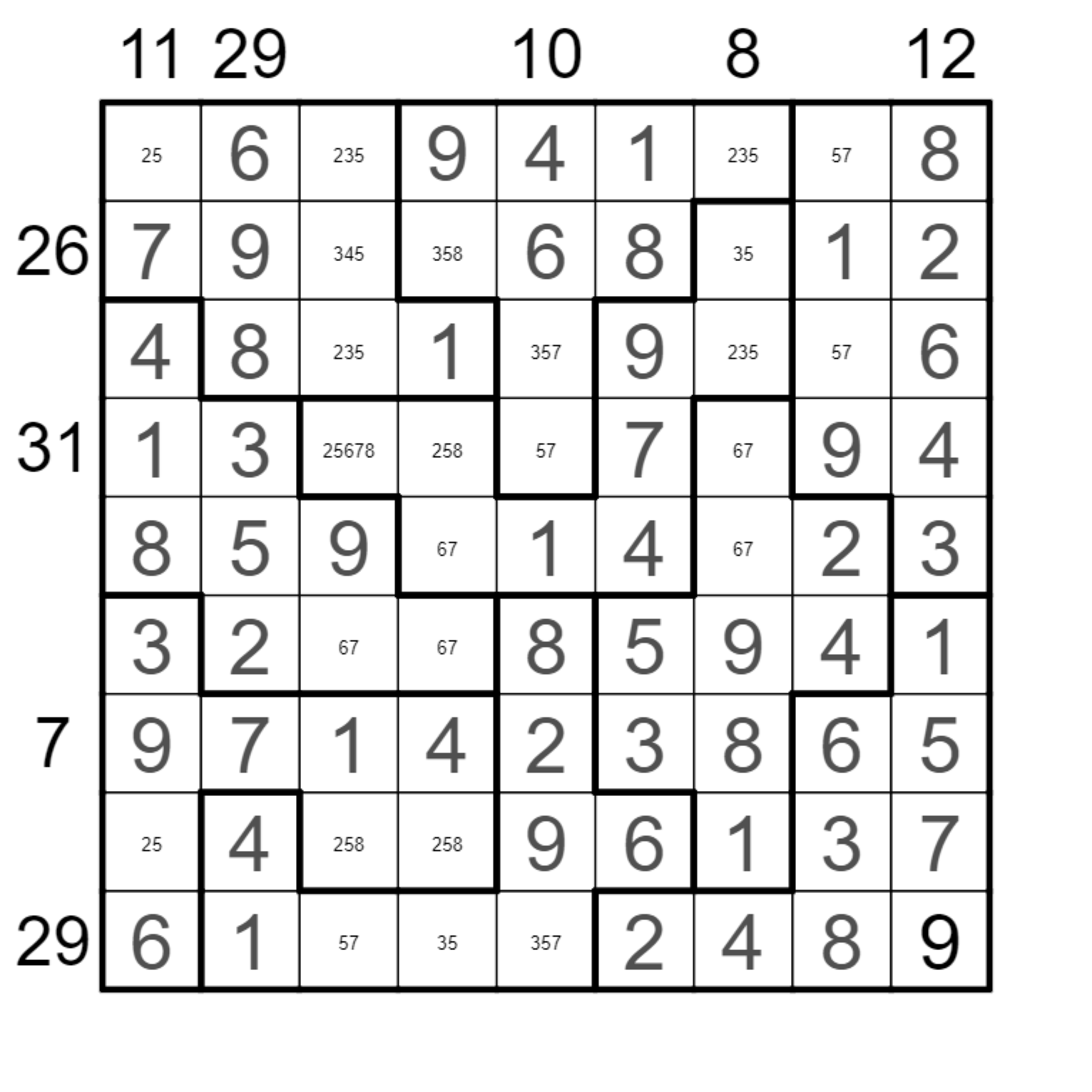 By going around multiple rows or columns can be solved, and many pairs are established. The bottom right box can be solved now there is a 4 in C6, and solving C6 will pretty much give us everything needed to finish off the puzzle.

Solving with normal sudoku logic from here leads us to the answer: 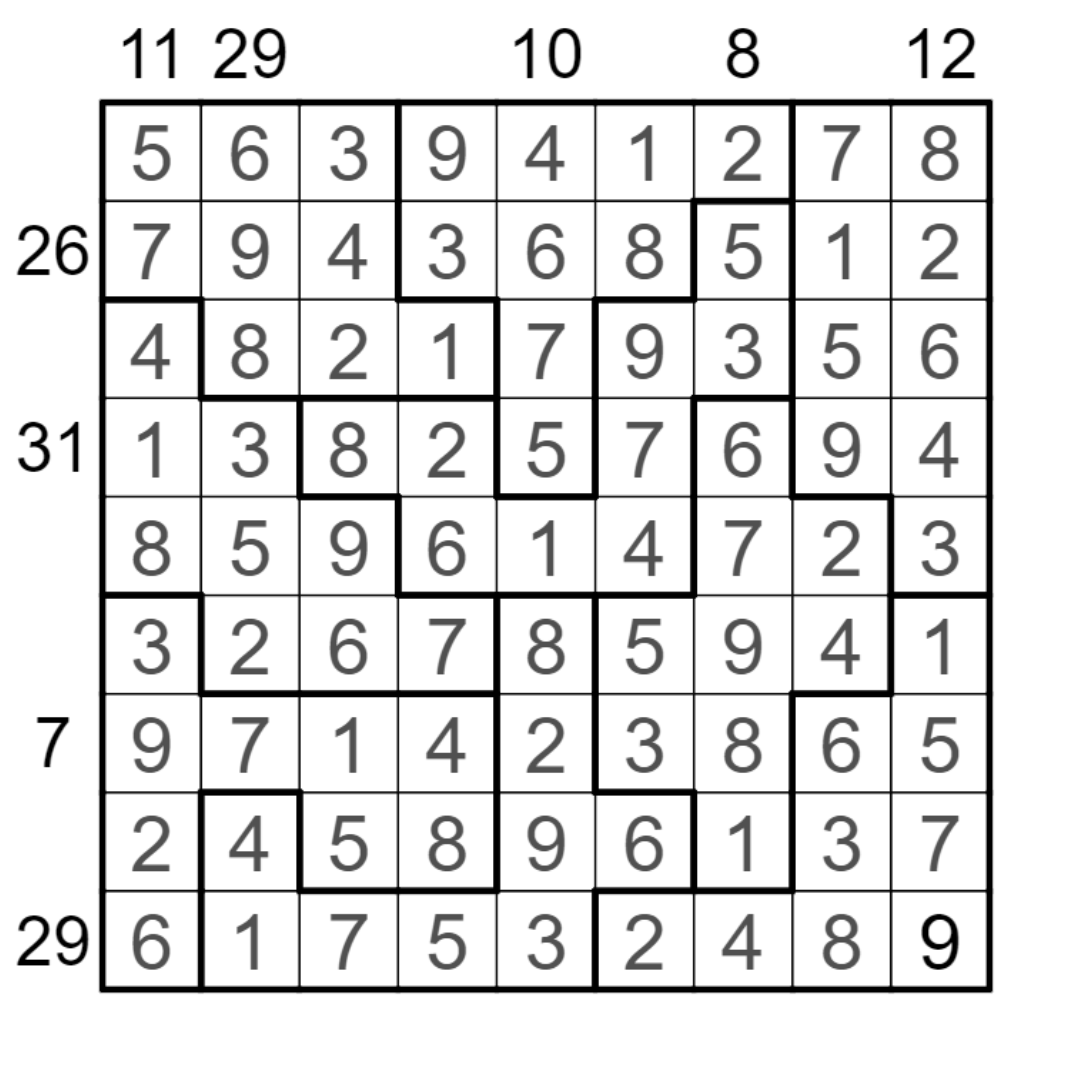 Well, I solved it, but now that I go back and look at my notes I am a little confused at some of my deductions. I did keep a lot of the clues in memory, as the program provided doesn't allow for much note-taking, so the process may not be obvious from the pictures. I will provide my process at the 3 places I got stuck. Step1: 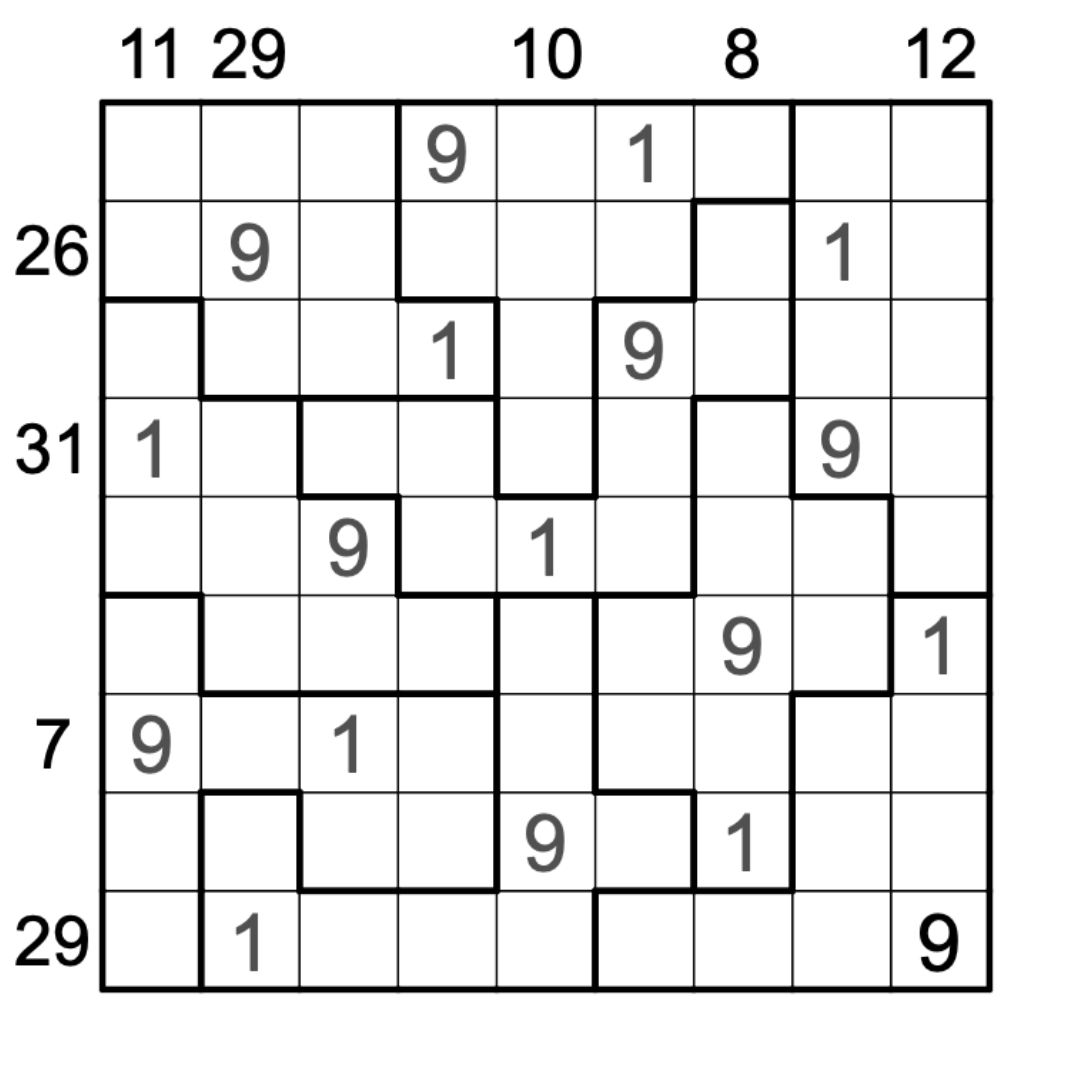 With the help of the sums, I got to the 25 numbers that other commenters mentioned: 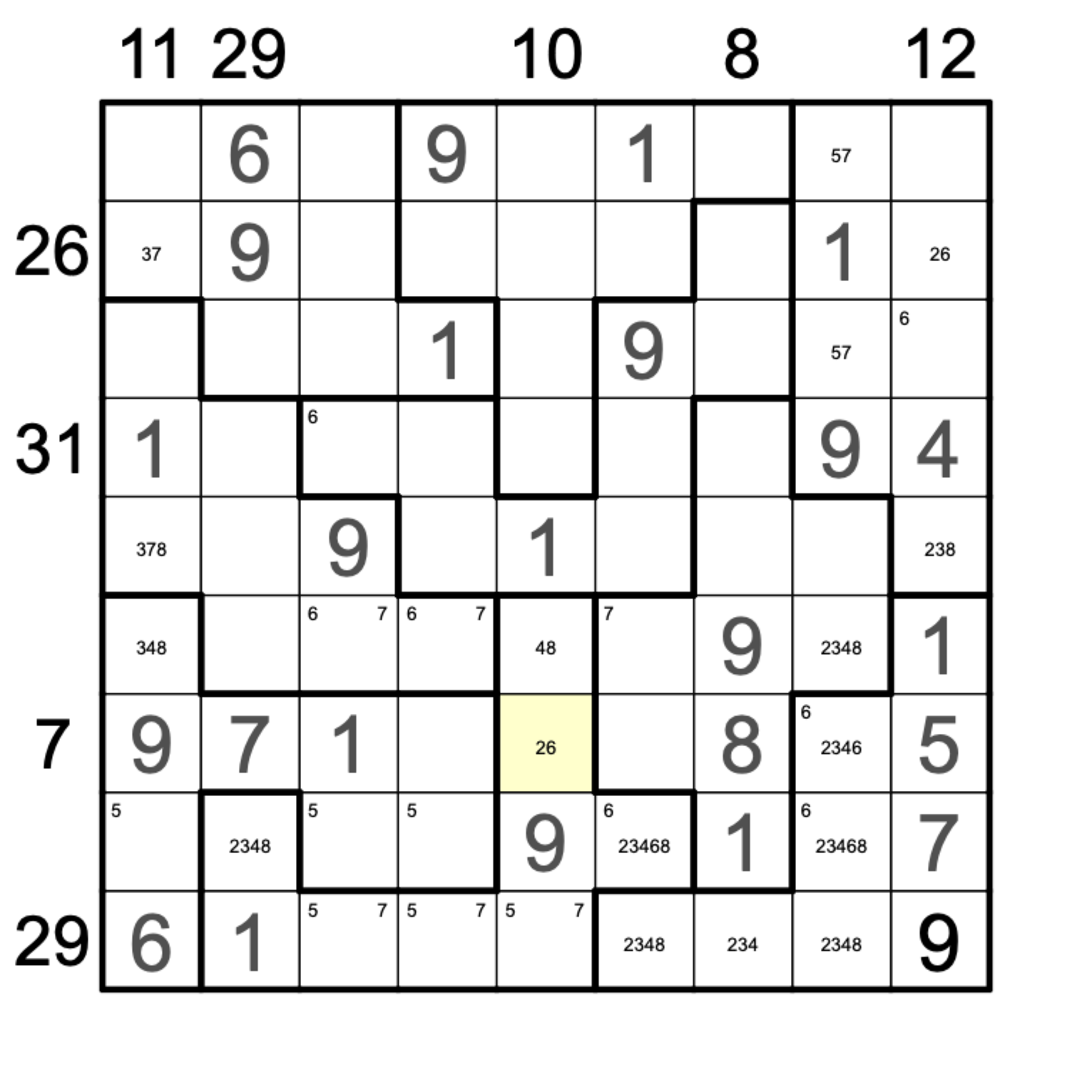 I spent a couple of hours here. Ultimately what I had to do was guess at a choice between 2 placements and get a contradiction, this way I would know that the number belonged in the other cell. I had to do this 3 times.
First the 6 could only be in R4C3 or R6C3. I chose R4C3 and got a contradiction. 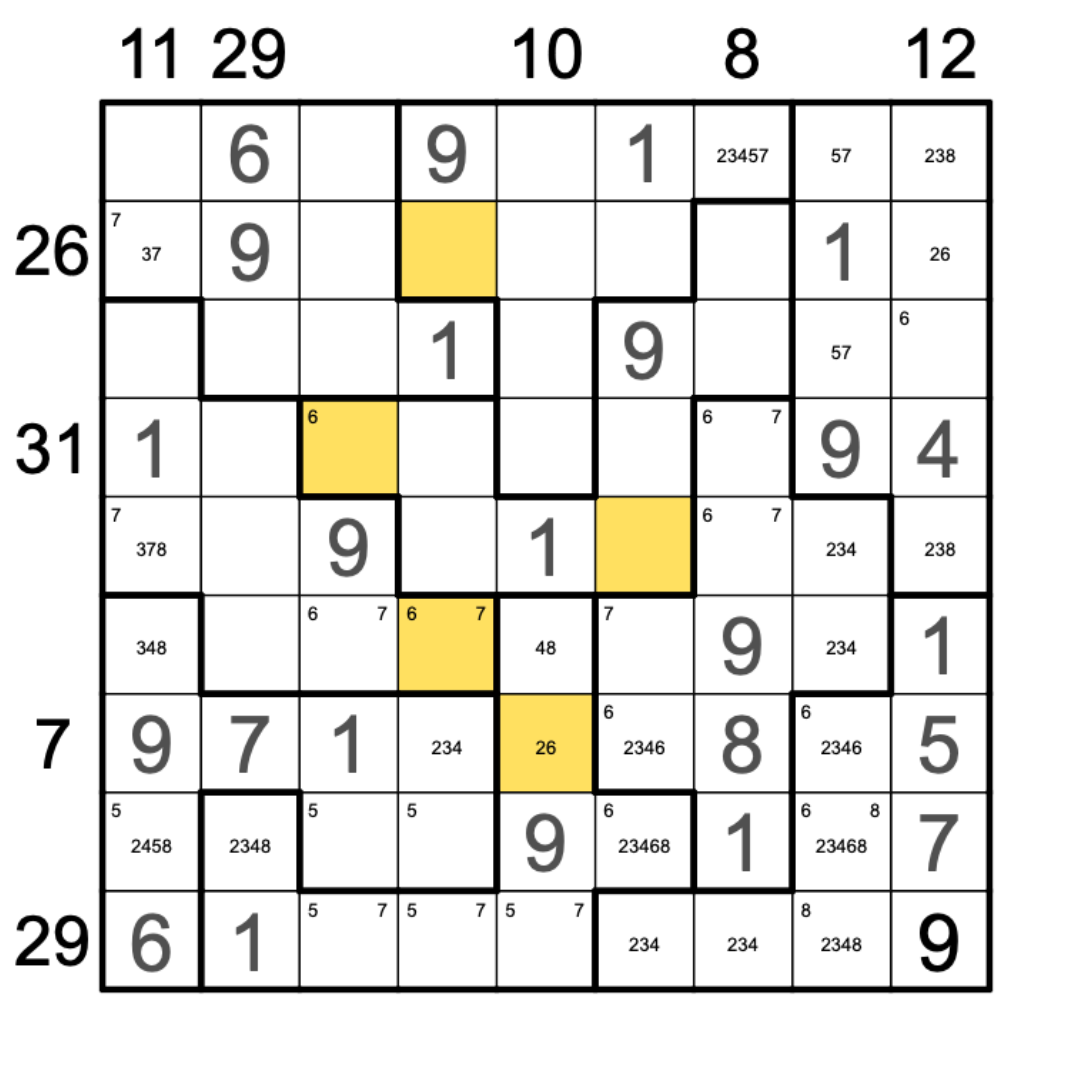 Like I said, it's hard to follow this pic because some of the key information is not on the board, and having solved the puzzle over several hours I don't exactly remember what all was goin on at this time. But from this step I determined that the 6 belonged in R6C3.
Next, another 6 is either in R7C8 or R8C8, choosing R8C8 leads to a contradiction, so I determined the 6 belongs in R7C8. 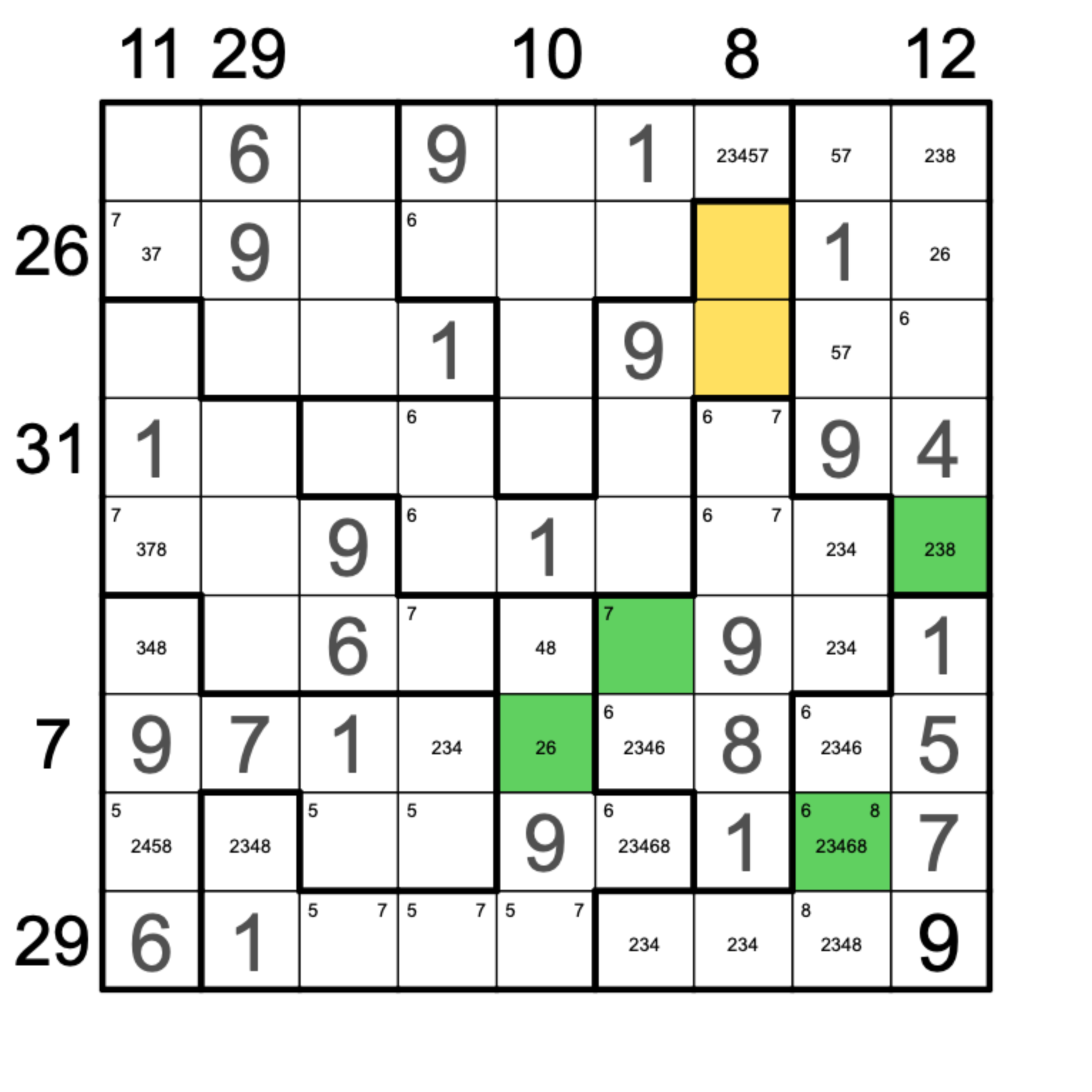 Finally, last guess is 7 between R2C1 and R5C1. Guessing R5C1 leads to a contradiction so R2C1 it is. 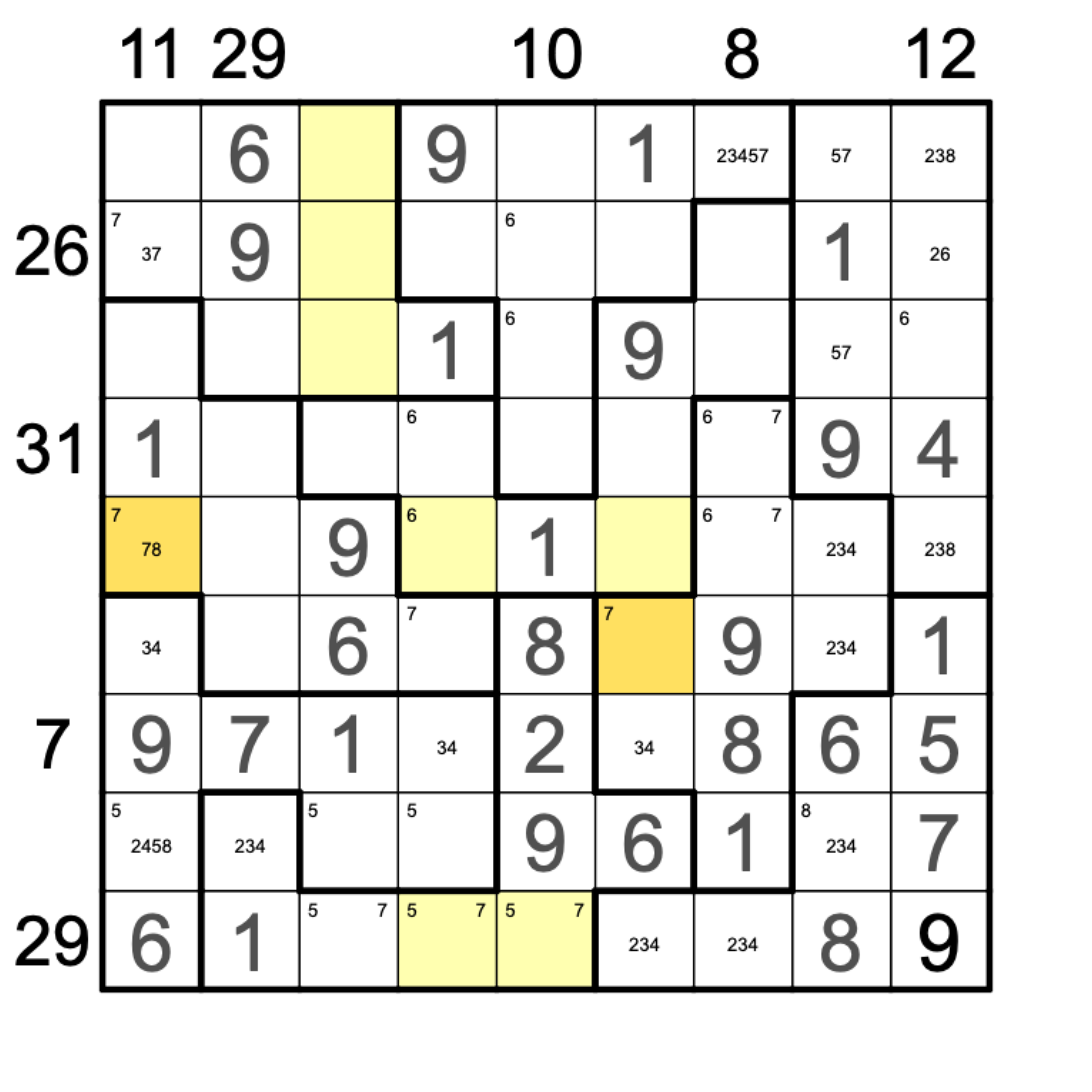 Finally, after these guesses I used normal sudoku rules and got the end result: 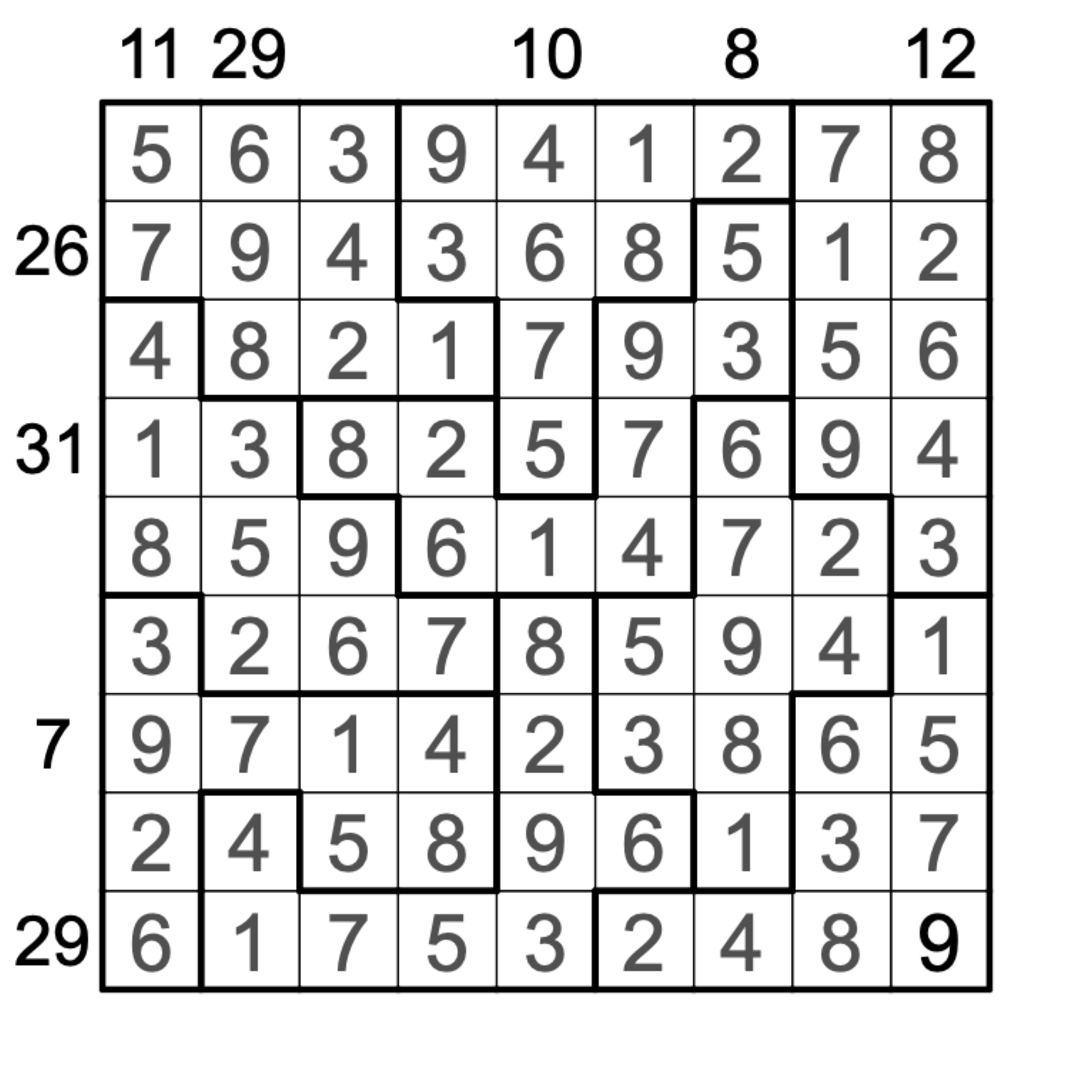