A family of 3 - a father, mother and son - are practising on a dart board. It has 3 shapes - a triangle, a circle and a square - on it. Scoring is as follows:

After the game, the board looked like this: (Each star is an arrow) 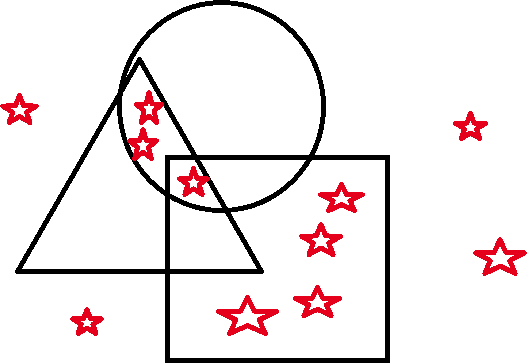 All 3 of them scored the same number of points.

Each of them also made a statement:

Exactly one of them told the truth. Who scored the 5?

Note: Remember that, for any

Statement X: If A is true, then B is true.

we can conclude that

Statement X is false if and only if A is true and B is false.

If dad tells the truth, there is a contradiction as everyone who scores in a circle scores in a triangle and vice versa. There is only one first and mom and son would need to have that. This all means the father definitely scored first in the square and did not have any 2's. He scored at least one 3 or the 5.

The dad cannot be telling the truth.

If we assume that the son told the truth, the mother lied (we already know the father must be lying). This means that the mother scored at least once in the triangle so scored a 4 or a 5. Her statement "my husband and my son did not score the same number of 2s as each other" must be false so we know the son must not have scored any 2s just like his Dad. This would require the mother to score at least 12 points ($4*2+1*4=12$) which is impossible as everyone scored 11 points.

This means the son must be lying. It means by process of elimination the mother must be telling the truth.

From this we can determine that the son scored three 2s. If he scored 2 or fewer, he would not score more than his mother. If he scored 4, than he would earn more than 11 points. This means the mother scored one 2. We know he scored a 4 or a 5.

Unlike the previous edit, I've shown that this is the only possible solution.

Not the answer you're looking for? Browse other questions tagged mathematics logical-deduction liars or ask your own question.

7
A list of 100 statements
4
Lionel Messi's soccer puzzle
19
Star Puzzle: Determine which circles are True and which circles are False
16
Find the number from 10 statements
0
Blood Relations in deducing family tree
12
True or Faulse?
1
Logical confusion
1
5 subjects and their marks
8
Mystery at the Arcade