During the last country fair, you have seen a weird arrow-shooter machine.
Its shape is a regular polygon with $N$ sides of length $1$ and it fires one bolt from each vertex at the same time.
The arrows have the same length $A$, same speed; also, suppose that they are unidimensional (no width).
At the beginning, the arrows are arranged so that each arrow's tail coincides with its vertex, and the angle of fire is variable for every bolt (of course, the arrow must be fired inside the polygon).
This picture may be helpful to understand the initial conditions: 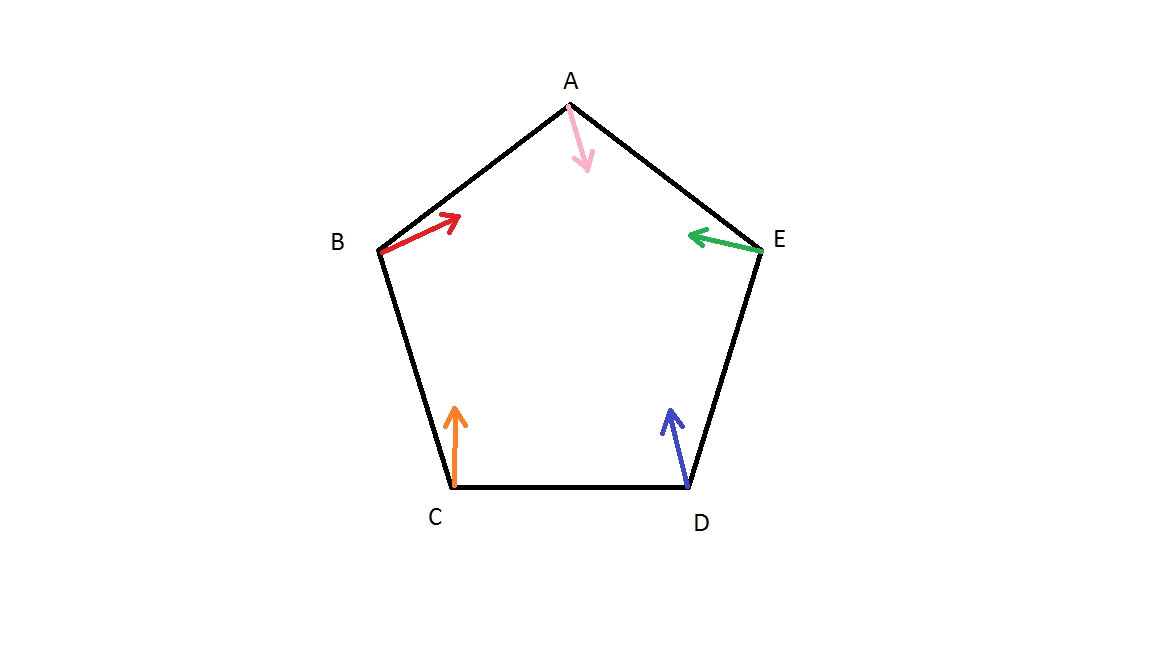 Assuming that every angle is determined randomly with equal probability, what is the chance that arrows won't collide after being shot?

Divide et impera! Simplify the problem, then "add parts" to your solution.

Edit: Mostly rewritten, with all the math done up to the integral, and results from a Monte Carlo simulation.

As I interpret the problem, what we have is a number of inequalities that must be satisfied by $ N $ random variables, $\theta_i$, $i=1..N$. Define the angles such that when they are $0$, all the arrows are pointed counterclockwise around the polygon. For reference, let's also let $X_i$ be the vertex of the polygon corresponding to $\theta_i$.

A general approach to solving the problem is:

It is my opinion that the math gets too complicated for this to be considered a "puzzle." It is my suspicion that any clever solution that bypasses the math is wrong, either by incorrectly simplifying the geometry, or by assuming the collisions are independent events. However, I'm having fun, so I'll go ahead and finish my answer.

What is a collision?

For any two arrows $i$ and $j$, we can draw lines along their paths as defined by the angles $\theta_i$ and $\theta_j$. Unless the lines are parallel, there will be exactly one intersection point. Call that point $X_{ij}$. If the two arrows are to collide, then that will be the point where it happens. A collision occurs when some part of both arrows is present at the intersection point at the same time. Because all the arrows travel at the same speed, and are fired at the same time, they are each always the same distance from their respective points of origin. Except in very rare cases, the distance to $X_{ij}$ from the two starting vertices will be different. However, if the tail of one arrow has not yet passed when the head of the other arrow arrives, then there is a collision. The limiting case is when the very head of arrow $i$ hits the very tail of arrow $j$, or the very head of arrow $j$ hits the very tail of arrow $i$. In the first case, $\overline{X_iX_{ij}}$, the distance from $X_i$, where arrow $i$ started, to the intersection point $X_{ij}$is longer than $\overline{X_jX_{ij}}$, the distance from $X_j$ to $X_{ij}$, by the length of an arrow, $A$. As an equation,

Flipping equation $\eqref{dist2}$ around and combining the two, we get

Here is a figure: 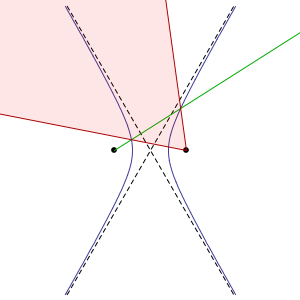 In this figure, $\overline{X_iX_j}=1$ and $A=0.3$, which makes the hyperbola relatively easy to see. The hyperbola is the two blue curves, and the dashed lines are the asymptotes, which the hyperbola arms approach as they extend toward infinity. The green line represents the path of an arrow emanating from $X_i$, and the two red lines represent the two possible paths of an arrow from $X_j$ which will hit the other arrow head-to-tail or tail-to-head. Notice that they intersect the green line at points which are on the hyperbola. The shaded red area represents intermediate angles between the two extremes, where the arrows will collide at some intermediate point, i.e.:

There are a few things we can observe based on this picture, regarding the angles of the two arrows and the asymptotes. All lines, except those parallel to an asymptote, will intersect the hyperbola twice. However, in our problem, the paths of the arrows are really rays, not lines, and so if the intersections are "behind" the starting point, we don't want to consider them. The location of the intersections is different depending on how the path of the arrow corresponds to the the asymptotes. The angle the asymptotes make with the x-axis is given by \begin{align} \DeclareMathOperator{\arcsec}{arcsec} \phi=\arcsec\epsilon \tag{10} \label{phi} \end{align}

Note that, as I have defined $\alpha$ and $\beta,$ these equations apply to either one of them. Since the near arm for $\alpha$ is the far arm for $\beta$ and vice-versa, and we know that, at any given point the difference in the distances is $2a$, we can use these formulas for either focus. Given $\alpha$, then, we can solve for two angles $\beta_+$ and $\beta_-$, representing the intersection with the right and left arms of the hyperbola, respectively. In order to have a result which is valid on the range$[-\pi,\pi]$, we use the tangent half-angle substitution, $\cos\theta=\frac{1-\tan^2(\theta/2)}{1+\tan^2(\theta/2)}$:

In both cases, we want the positive solution, which corresponds to $\alpha$ and $\beta$ having the same sign, which is required for a collision.

We are now in a position to relate the parameters of the hyperbola in the previous section to the parameters and random variables in the problem. First, from $\eqref{epsilon}$ and $\eqref{XiXj}$,

And then, referring to the diagram, 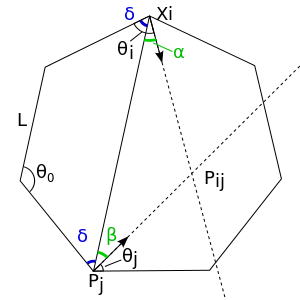 Mathematica manages this, but the result is not anything pretty, and it does not simplify it into anything that I would consider elegant. In order to solve the full problem analytically, we also need to find joint probabilities like: $$\int \arctan\left(c_1\tan (x -d_1)\right)\arctan\left(c_2\tan (x -d_2)\right)\dots\mathrm{d}x$$

At this point, I give up on the analytic approach.

We have everything we need to determine whether a given set of random variables will lead to a collision. To find the probabilities, let's just run a lot of tests. Here are the results for $N\in[3,8]$. For each graph, values of $\frac{A}{L}$ were considered on the range $[0,1]$ in steps of $0.02$, with one million trials per point, 51 million trials per graph. Each graph took 6–7 minutes to generate on my laptop. 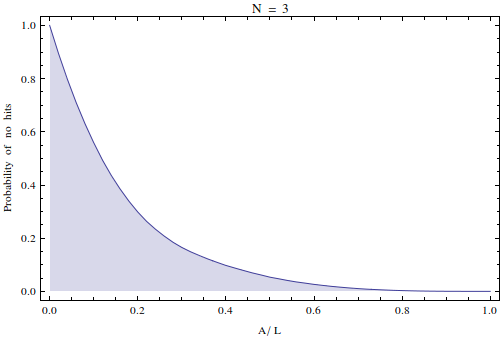 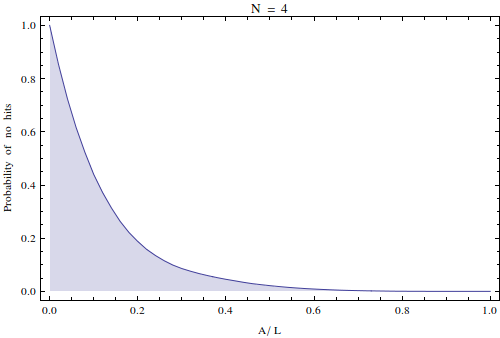 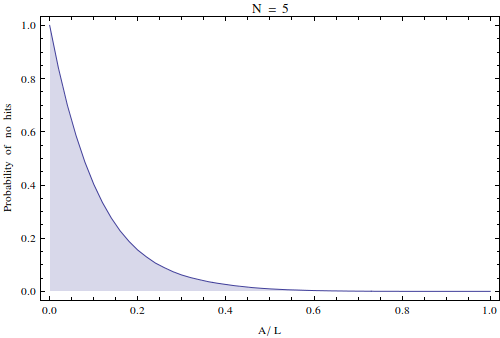 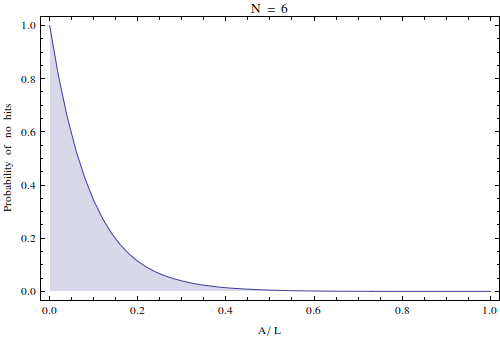 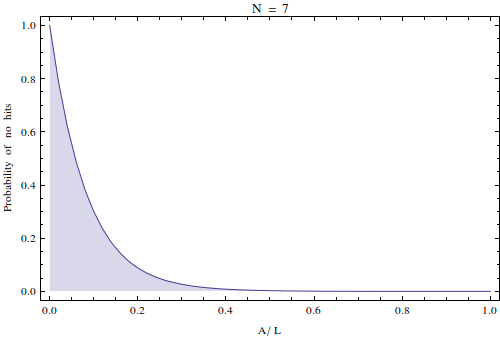 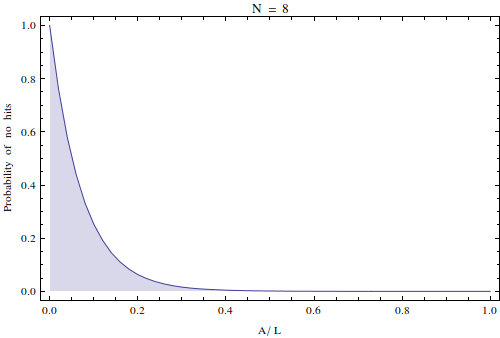 The general pattern is that the probability drops from 1 to 0 fairly quickly as $\frac{A}{L}$ goes from 0 to 1. The entire distribution also drops a little bit as $N$ increases. Of course, we could have said that from the beginning.

First off we must separate cases ,

when the arrow is unleached from any vertex , the angle $\theta$ which it makes with any side is not the same as that it makes with other side . 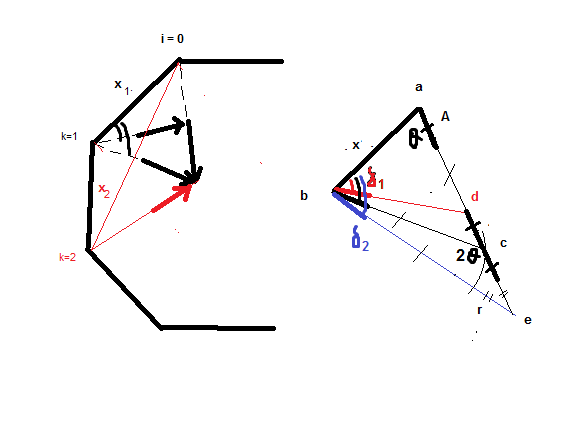 in this picture lets calculate the parameters.

$x=L=1$ for the nearest vertex

holy sh** this doesnt seem to end yet , we must calculate the common probability and subtract it from P , following this rule: $P1 \bigcup P2 = P1+P2-P1 \bigcap P2$ 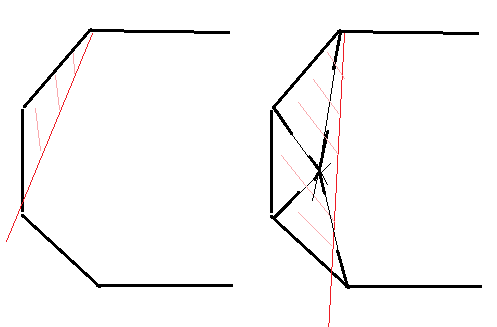 so probability of the arrows to be in ollision is

The global form of the probability for any arrow i to be hit by atleast one among n-1-i arrows coming from counter-clockwise direction is:

The general probability for any two arrows atleast to be in collision is:

probability to be not is just

6
Points on a cube
17
Points in a Rectangle
9
What is the probability that all the bullets will be destroyed?
5
Best angle to attack
5
Achieve the best outcome by a tactical statement
1
Anne and Bernard's marbles
12
Outmaneuver your opponents in the duel
8
Probability that D wins this contest
12
An interesting geometry problem