A maze of placed faces

Twenty-nine images of famous people have been specifically selected and carefully placed so as to form a maze (below). However, two of the images - both of US Presidents - have been redacted (marked 'A' and 'B').

To navigate the maze, you must move vertically or horizontally from one image to the next, without revisiting any image. One of the four spaces marked 'START?' is the correct place to begin - you must deduce which of these it is - and the target space is that marked 'END'.

TASK: Deduce the identities of the US Presidents who should appear in the cells marked 'A' and 'B'. Plot the path taken to navigate the maze from the correct 'START?' space to the 'END' in the only way which makes sense of every carefully placed photograph. 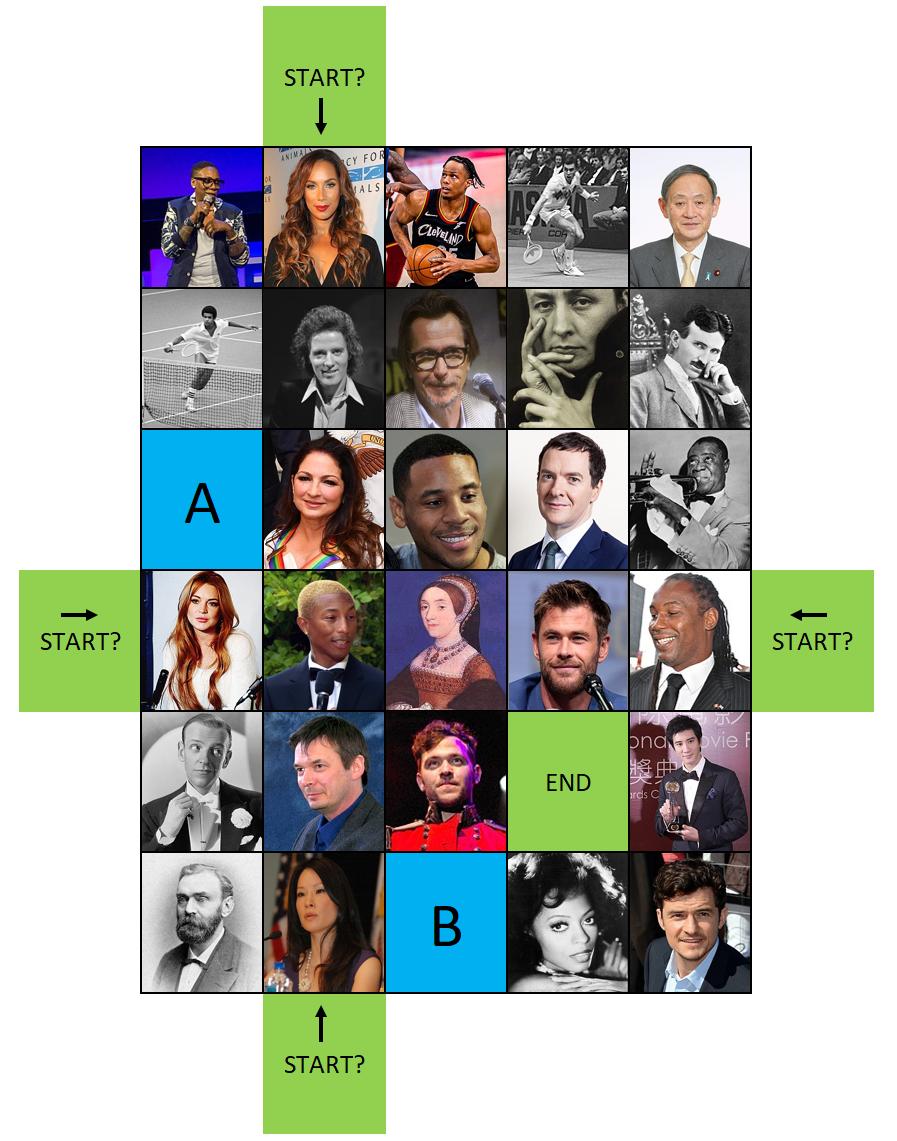 What connects the four potential starting squares? Where can you go from there?

The two missing presidents are:

(A) George Washington and (B) Richard Nixon.

As Victor has found out ...

... the initial letters of the people in the grid are important. The letter pairs can be visited in order to form a single word. (All tiles are visited, so msh210's comment to the question is useful, but it's also easy to see why the possible starting squares could not be chosen differently.)

... Llanfair­pwllgwyngyll­gogery­chwyrn­drobwll­llan­tysilio­gogo­goch, the lengthened name of a village on Anglesey, Wales, designed to be the longest place name. Perhaps you've seen a photograph of the rather long sign at the village's railway station.

The letter pairs GW and RN are needed to complete the name. Oh, and the title, "A maze of placed faces" is a hint that we are looking for a place name.

... to Jerry Dean who went through the trouble of identifying all the people. That was a great help.

Possible first steps in solving it

This is a partial answer, likely somewhere between 5% to 30% complete. But since nobody answered this yet, it might be a small breakthrough.

First, I just copied this from a comment to a chat link (thanks for Jerry Dean) and the OP confirmed that they are all correct:

Ok, are those random names?

@msh210 Well, I haven't actually explicitly said that every space must be visited (just that you need to make sense of the selections...) - but if you think they do need to be then I'd hope any answer would justify why :)

Also, connecting the names, I produced this:

Based on that, A should be one of:

And B should be one of:

Now, I got stuck.

Not the answer you're looking for? Browse other questions tagged logical-deduction knowledge pattern visual mazes or ask your own question.

5
Book stacking brain teaser
16
The Origins of a Confusing Maze
11
Maze Solving Robot, More Difficult Variant
18
Jump to the 13th dimension
40
Magic Maze Puzzle
16
A maze, a statue, and a riddle
23
Jail-Maze Crescendo: On charting a dot-path home
15
The Maze of Hermes
18
NASA analyzing message from space
0
The maze of everlasting flowers