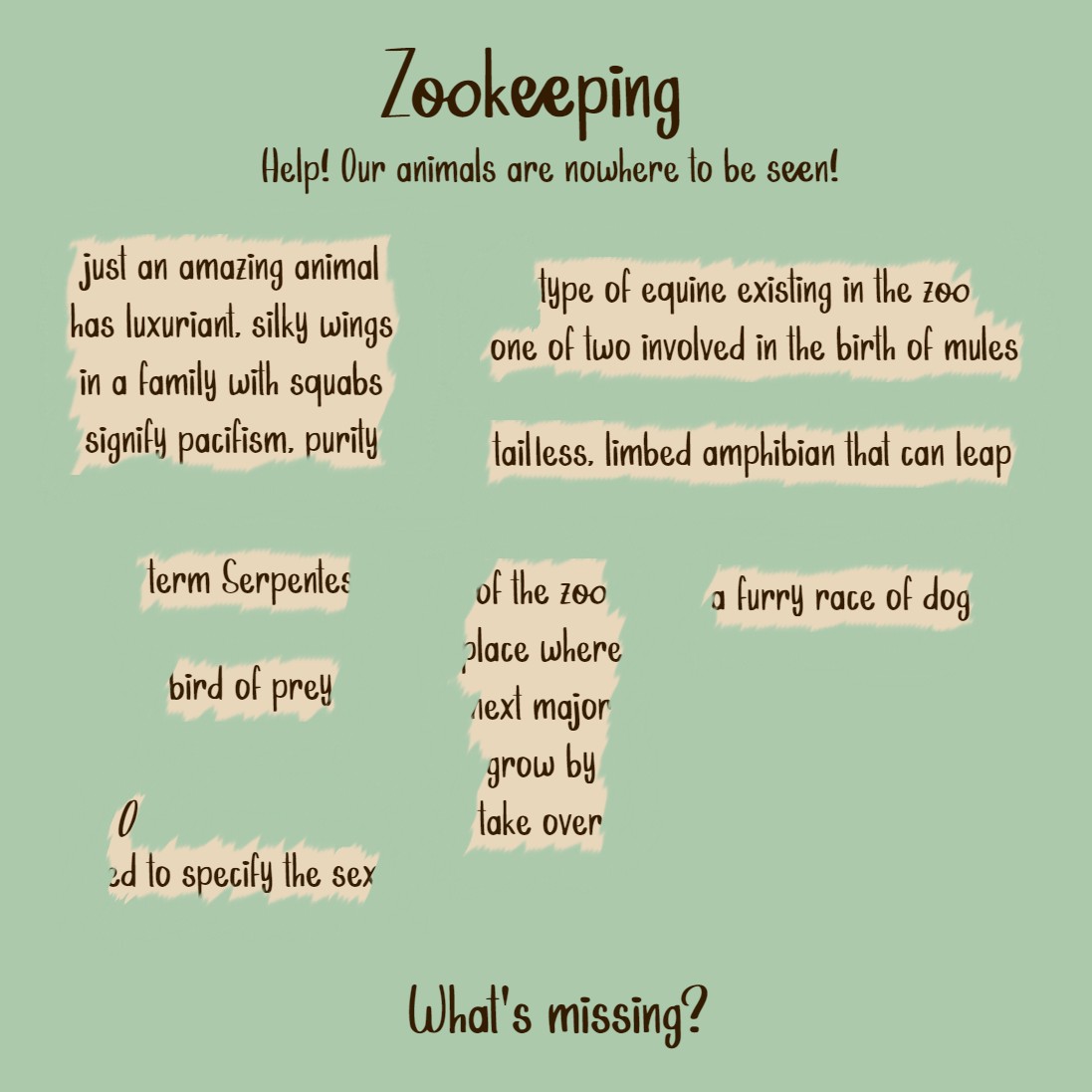 Your final answer should answer the question above.

The first thing of significance to note is that the three longer excerpts...

...have a very strange letter set - all contain J, X and Z among the letters. In fact, the more you look you can see that each of these contains every letter of the alphabet except for a few.

In fact, if we analyse which letters are missing we find that these spell out the names of animals! In the case of the top-left and top-right excerpts, these are actually the animals talked about within their text (the one at the bottom is harder to confirm as the same, due to its scattered nature).

The question now is: what about the other excerpts?

For some of them it seems it is possible to find animals that both suit their vague definitions and use none of the letters found in their text...

Let's return to 'O...ed to specify the sex' shortly.

Consider the letters of the animals we are finding here. These almost look like we might be trying to cover the alphabet again using the letters from their names - we've already covered A, B, C, D, E, F, G, H, I, J, K, O, P, Q, R, S, T, U, V, W and Z (leaving LMNXY). If we can find an animal that satisfies the last remaining clue (whilst accounting for the as-yet-unused M), it is reasonable that we will find ourselves left with the letters to spell LYNX, which would then be the animal to answer the OP's question of "What's missing?" This would be especially appropriate, since a 'missing lynx' is a nice homophone for the puzzle-worthy 'missing links'!

The only thing missing from my answer at present is the animal behind 'O...ed to specify the sex'. If my LYNX theory is correct then the animal's name must be made up only of letters from the set {ABGJKMQRUVWZ} (i.e. those letters that do not appear in the text or the word LYNX) and must include the letter M among them. However, the only animal name I can spot among these without reusing letters (since none of the others already found have repeated letters) is RAM - but I am unsure of how the context of 'specifying sex' is relevant for this animal... Perhaps some more thought still required to nail down that last missing animal.

79
R᠎e᠎d᠎u᠎n᠎d᠎ancy
17
Lost and Found᠎
30
M᠎ini​m​alis᠎m᠎
22
E​l​u​c​idation
13
Some say, obsessed
43
Definition Resolution
31
Between you and me
30
PSE Advent Calendar 2021 (Day 1): La laa laaaaaa laa la Christmas
4
a paid day/cOmes, goEs away quIck, So/much became/of a juco
3
It's All Just Noise To Me