Your final answer should describe the legibility of this puzzle.

the right side looks to be four lines of text. We can divide the pixels up into 3×3 chunks to read them:

Alright, those seem important. But what about the other side?

Well, the colorful rectangle at the bottom appears to be divisible in the same way:

This looks like the numbers 123456789.
And there are similar shapes appearing in the top...

This leads to the main aha moment of the puzzle:

The top left can be cut up the same way too -- but parts are being obscured by the number squares at the bottom! So the second and third letters of the first row are 8 (rotated) and 9; on the far right of that row, we have 7, but it's been rotated and color-flipped.

The colors help us disambiguate some identical-looking numbers, like 2 and 5, and 1 and 4. (Though 6 and 9 aren't disambiguated.)

Now the clues make sense - they're giving hints as to what's underneath the squares. For instance, the second row is pretty readable already as D?E[L/C][S/J]: given the clue "USES A FOIL", the answer must be DUELS.

So we can fill in DUELS, using the font on the right as a reference for the "official" letter shapes.

Then we can continue, and reveal what was previously hidden:

The answers to the clues are ARENT, DUELS, NOVEL, and LAYER. 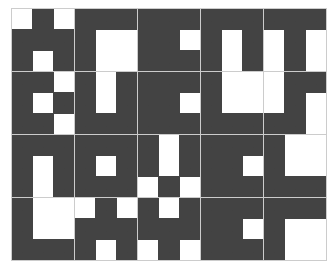 There are a few ambiguities in the tiles (which is 6 and which is 9? is 8 rotated or flipped?). But these can all be resolved, since all but one option for each will give you a non-letter.

So, the legibility of this puzzle is: