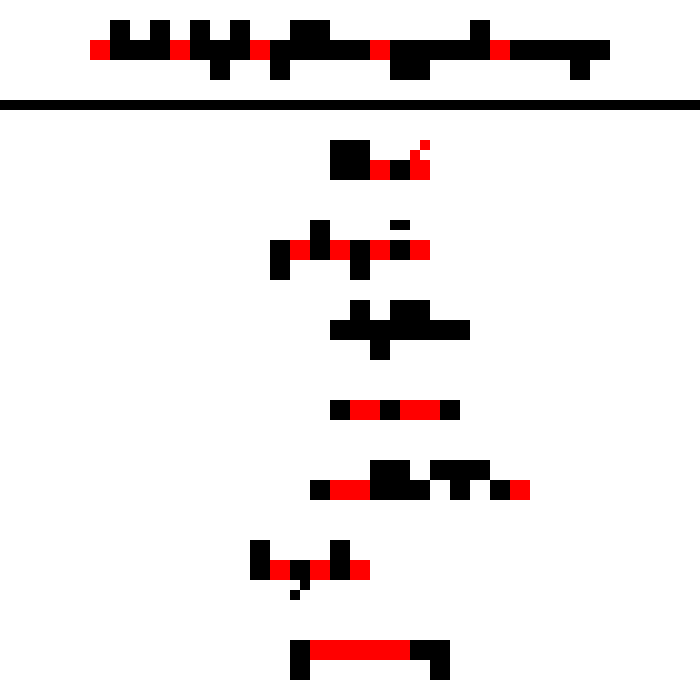 Your final answer should describe the puzzle (more or less).

I think the intended "final answer" is

the word BARCODE is spelt out vertically, starting at the first letter of the first word. This kinda describes the overall look of the words after transformation.

What's going on, in case the above doesn't make it obvious enough:

represent each letter by a square "on the baseline", plus a square above it if it has an ascender (bdfhklt) or below if it has a descender (gjpqy). Red for vowels, grey for consonants. Diacritical marks and other characters such as apostrophes are represented in kinda-obvious ways.

I initially thought there were a couple of errors in the puzzle. I no longer do, and I repent in dust and ashes.

I thought "caesium" had something wrong with its widths; in fact all that's going on is that the ae ligature is represented as something like 1.5x the width of an ordinary letter. (Thanks to Lukas Rotter for pointing this out in comments.) There's something a little odd about this -- in actual writing, or most printed text, all letters would be of differing widths; the only way you get "i" and "m" to be the same width is printing in a monospaced typeface (or typing on a typewriter), and -- as you can see in the transcript above -- then "ae" is also single-width. I dunno, maybe some typewriters have a way of moving the carriage half a unit in order to typeset ligatures like ae?!

9
What's longer than an hour and shorter than a minute?
12
Not With a Bang, but a Whimper
31
The first Density™ Puzzle!
8
Density type puzzle 7
19
Density™ finally back from holiday!
13
Density™ 3 - The Game!
8
Density™ 4… Will there be more?
69
R᠎e᠎d᠎u᠎n᠎d᠎ancy
16
Lost and Found᠎