How many pilots do they need?

I have just watched this old riddle video from Ted-Ed. It basically asks how can three pilots coordinate their flights such that the professor (one of the three pilots) can circumnavigate the earth. I would recommend you watch the video before answering this question. The question is: If the planes were to only hold 90 kiloliters of fuel, how many pilots would they need to allow the professor to circumnavigate the earth. I do not know the number, nor do I know if it is even possible.

Summarised rules of the original problem:

And rules for this problem is as follows.

N pilots, one of them is our professor, want to circumnavigate the earth (360 longitudinal degrees) with the following conditions:

How big must N be for this to be possible?

As pointed out by @loopy wait, this answer is wrong. Just leaving it up here for inspiration.

A plane can budget its fuel as follows: 18L for flying away from port, 36L donated to the next furthest plane, 18L for flying towards port. This creates a "corridor"... imagine a plane at 0deg, 2 at 36deg, 2 at 72 deg, etc. From here, 2 planes fly towards each other to 18deg, 2 planes to 54 deg, two planes to 90 etc. Then they fly back to previous positions. The fuel is given by the previous plane in the loop. It should look like the picture below:

As you could calculate, the planes are only using 72L of their tank. This allows them to carry 18L, which it can use to escort another plane and donate 18L when turning back 18deg later. Hence you can fly the main plane 18*numRefuelers degrees.

It's basically the same thing as before, but without having to escort the main plane, the planes can seperate 22.5 degrees instead of 18deg, allowing

We are going to use 8 refuelers with the corridor property, but the 8th will leave the main plane at 135deg, so it can fly solo till 225.

27 minutes used, 63 till the solo is complete. No plane can fly to -135deg from the airport in 63 minutes. Therefore, when the first western refueler lands (81 minutes left), 3 refuelers must be in sustainance in -22.5, -45 and -67.5. With each western refueler landing and takes off to the east, the 3 planes continue the sustainance paths, but the paths themselves move further to the east by 22.5 degrees. Once the range of furthest eastern refueler reaches 135, the planes on the East (of which there should be 6 now) should do "corridor". However, note that because there are 7 planes (the main plane has been recieved) and 6 half-full planes able to provide fuel, the system has 240 L of fuel, holding the sustainance paths for 240/7~34 minutes before the planes run out of extra fuel and the last plane must be ditched.

However, there are still planes on the west that are landing. If we can get 8 planes on the East within the 34 minutes we could land everyone safely. The 6th plane landed 13.5 minutes before the main solo flight ended, leaving 9 minutes till a 7th and 31.5 minutes till an 8th plane can be put on the East. This is less than 34 so we are saved! Now, we have the same corridor system as was used to start the professor, except in reverse. This allows the professor to land, as well as all their associates.

I apologise this is really confusing to read. I will try to make an animation soon, but I am very busy with school atm.

Temporarily scrapping this partial idea as I found a better solution, but will leave it here to inspire others.

Essentially the strategy is

the further away from the airport you are, the fewer planes should be flying, which means to let the main plane fly from 3/8 to 5/8 alone.

I say this because

The further you are from the airport, the more fuel it takes to reach you, and after a while you will need several degrees of refuelers to reach the multiple planes far away.

Working backwards is the best way to do this:

I believe that it takes a minimum of

20 planes, 19 refuelers plus the circumnavigating pilot, to complete the trip.

To do this, we rely on a range of alternate refueling steps.

1) Five planes start together at the airport, fly 15 degrees outwards, one transfers 15 kl fuel to each of the other four and returns to the airport. The other four can continue on with full tanks.

2) One plane starts from the airport, flies 15 degrees out to meet four returning planes just at the point of running out of fuel. The first one transfers 15 kl to each of the other four planes and all five have just enough fuel to return to the airport.

3) Two planes starting at point A (with full tanks) fly 30 degrees to point B. At point B, one transfers 30 kl to the other plane that can now continue onwards with a full tank. The first plane can return to point A (where it arrives empty and needs partial re-fueling from yet another plane).

3) One plane starting at point A (with full tanks) fly 30 degrees to point B to meet one returning plane just at the point of running out of fuel. The first one transfers transfers 30 kl to the other and both can now return to point A (where they arrive empty and need partial re-fueling from another plane/planes).

Using these strategies, as illustrated in the fairly self-explanatory diagram below, the circumnavigator can complete a trip that includes flying a 90 degree solo leg with refueling at both ends of that section of the trip. I believe that this solution not only uses the minimum number of pilots, but also uses the minimum quantity of fuel. Note that in the diagram, one or more re-fueling events (as described above) occurs at every intersection of two 'flight-lines'. 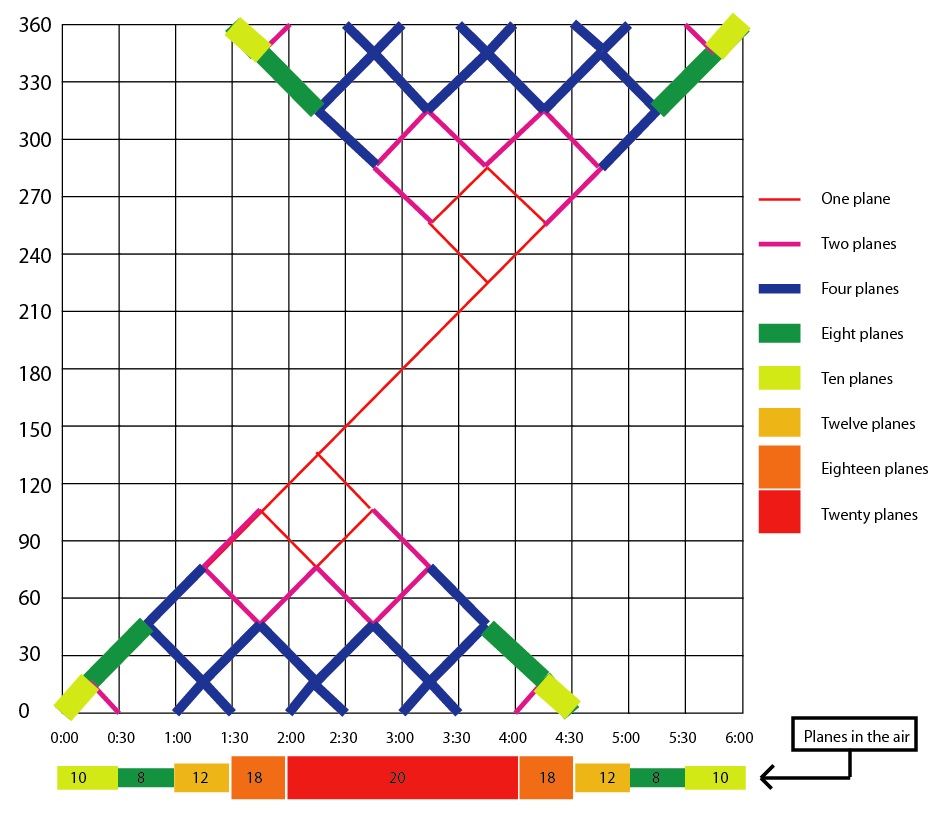 11
Amelia Earhart Challenge
3
Lattice hopping
7
A Strategy Game Involving Conquering of Regions
6
A Crucial Delivery
15
Pulling Apart a Jigsaw Puzzle
1
How can they attack?
3
The children's conversation: How many marbles do they have?
2
1 lion, with a zebra and a fixed enclosure