Zombies are back again. Same as last time, You're at the origin, and zombies occupy the points $(100𝑖,100𝑗)$ for all integers $𝑖,𝑗$ except the origin, as shown below: 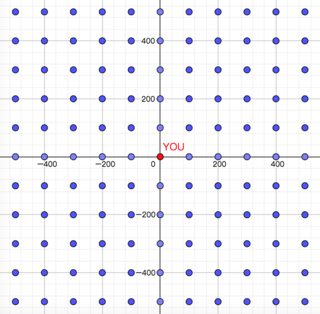 The ratio of your speed to that of a zombie is 100. You and the zombies move simultaneously and continuously. There's no restriction on how you move: you can take any straight or curvy path as you like. At any moment, each zombie only moves towards your current position (i.e. it's trajectory is a pursuit curve). You are caught if your distance to a zombie is less than 1.

Question: can you avoid capture forever?

The gap between any two zombies is decreasing with time, and the decrease is strict unless the pair and you are collinear. But the farther away the zombies are, the slower that gap decreases.

If there were only 2 zombies 100 away from each other, a straight line dash to the midpoint of the pair will result in capture if they are sufficiently far away from you. But you can always manage to slip through between them if you plan your route wisely.

Here is my intuition on it, which is not mathematically rigorous.

The answer would be yes, by running in a stair shape

As stated by Hint 2, running between 2 columns of zombies can't be done infinitly as zombies get too close to us after some distance. Yet it seems a good starting point. Let's consider we get to point 50, 50 and then run upwards (between the 2 columns of zombies). We will be able to run some time before the column gets too narrow.

Now what happens when the column is about to get too narrow to keep running upwards ? Running upwards only caused the grid to shrink around the column we ran in, as shown in the drawing below (same paths are represented with same colors), because zombies are very slow compared to us, a zombie one slot on top of the other will follow the same path as the zombie below, but with one time step offset. This leads me to think that the horizontal columns shoudn't have shrinked much because of the vertical run we did. 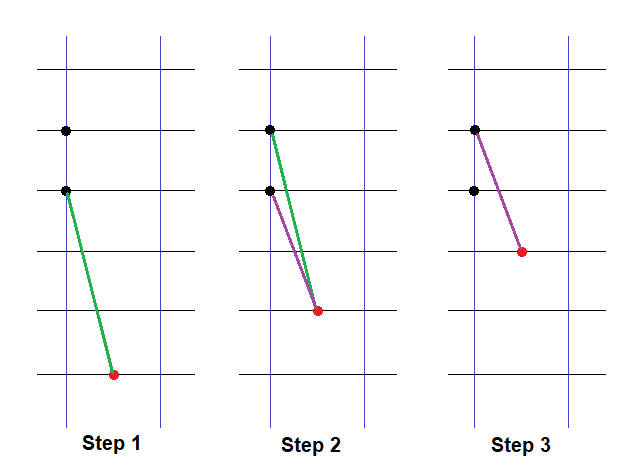 So once the column is too narrow, we should be able to run in the horizontal column at our right. Once this one gets too narrow, we run upwards again, and so on, as represented below 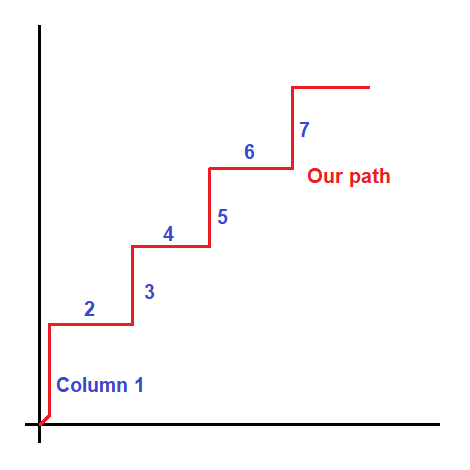 One could argue that after running few columns, the whole grid should have shrinked so much that we would get cornered, but since zombies are very slow compared to us, the columns we ran should be 100+ steps long (which corresponds to 10 000 distance in the question), so it is likely that the columns are so far away from each other that the distance between zombies in the column 5 didn't change much while we ran in column 1.

As I mentionned at the beginning, this is just my guess and I have absolutely no mathematical proof of it, I am not even sure what I presented here actually works.

Not the answer you're looking for? Browse other questions tagged mathematics geometry strategy game or ask your own question.

21
Can you survive this infinite zombie attack?

17
Pythagorean walk
26
The lion and the zebras II: The lion with millimeter-long claws
10
Precision Tag - can the lion win?
12
Enlarge the Square?
8
Plants vs Zombies Annihilation
6
Five-hand poker
7
Sliding 10 coins to make them alternate
5
Surviving the Zombie Apocalypse
21
Can you survive this infinite zombie attack?
1
Catch the fugitive