Making a 10 digit number divisible by 3

Alice and Bob play the following game, taking turns. Alice starts and writes a single digit from 0 to 9 at the blackboard. At every turn, each player adds a single digit at the right of the current number. This digit must differ from the previously chosen digit modulo 3. The game ends when a number with 10 digits is reached. If this number is divisible by 3, Bob wins otherwise Alice wins.

Who has a winning strategy?

As a number is divisible by 3 iff the sum of its digits is, we need only look at this sum. Let $M_1,M_2,...$ be the moves. We can express the condition that consecutive moves differ modulo 3 by writing

etc. The total sum is therefore

In particular, each player's every third move is completely irrelevant and the other player can use their two adjacent moves to set an arbitrary value modulo 3. As the last such double move is Alice's she only needs to set this value to 0 such that Bob in the very last move is forced to move away from 0.

the only thing that matters is the sum of digits modulo 3 - if that sum is zero, Bob wins, and if not, Alice wins

Represent a state by three things: the sum so far ($s$), the last move played ($l$), and the number of turns remaining ($t$). In these charts, I will color each possible state red for it being a winning state for Alice, or blue for it being a winning state for Bob.
At $t=1$, it is Bob's turn; Alice wins if she had successfully prevented Bob from making the winning move. 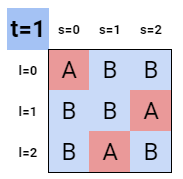 So, Alice wins with the following strategy: On the second-to-last turn, make the sum either 1 or 2 -- they can't both be blocked! Then, Bob will make a move, setting the new sum to $s$. On your final turn, the move $s$ will be open to you, and this sets the sum to $2s$. Now it's the final turn of the game, and Bob has to play $s$ again to win, but you just blocked it.

Here is the entire transition graph for this game. Circles with dashed circumferences are legal starting states for Alice; yellow circles are the states that Bob wants to end the game with. 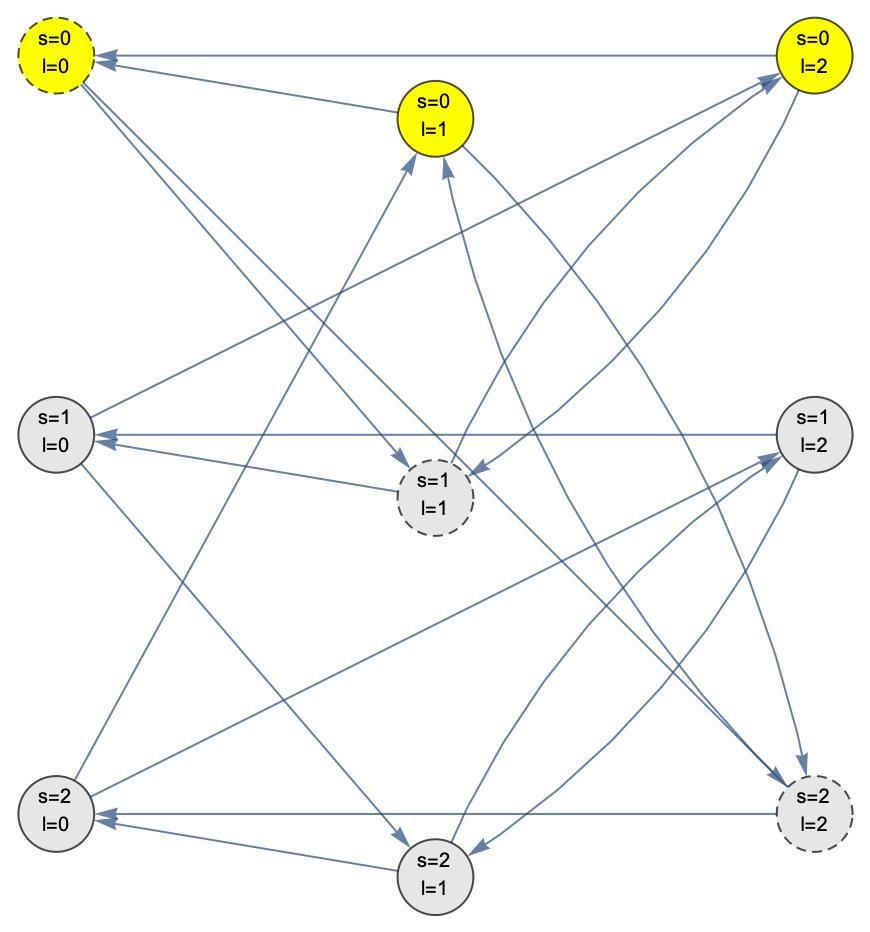 Not the answer you're looking for? Browse other questions tagged mathematics logical-deduction game number-property or ask your own question.

13
A two player game: Player who gets to 1000 or more first, wins
38
The subtraction game
7
A prime number game
10
Let's revisit this later (a two player knight's game)
7
Removing green marbles from the table
8
Picking A Number Game
10
99 numbers on the blackboard
20
Making a 9 digit number divisible by 11
2
Adding up divisors of integers
9
Removing coins from a pile depending on the previous move